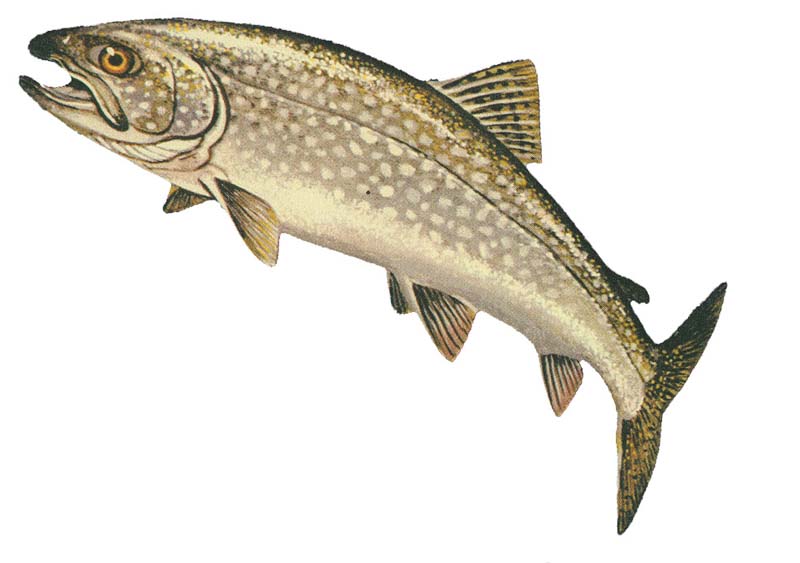 Lake trout ("Salvelinus namaycush") is a freshwater char living mainly in s in northern . Other names for it include mackinaw, lake char (or charr), touladi, togue, and grey trout. In , they can also be variously known as siscowet, paperbellies and leans. Lake trout are prized both as and as food fish.

Lake trout are the largest of the charrs, the record weighing almost 46.3 kg (102 lb). They were fished commercially in the until , overharvest and pollution extirpated or severely reduced the stocks. Commercial fisheries still exist in some smaller lakes in northern .

Lake trout are dependent on cold, oxygen-rich waters. They are pelagic during the period of summer stratification in s, often living at depths of 20&ndash;60 m (60&ndash;200 ft).

The lake trout is a slowly growing fish, typical of waters. It is also very late to mature. Populations are extremely susceptible to overexploitation. Many native lake trout populations have been severely damaged through the combined effects of hatchery stocking (planting) and overharvest.

of lake trout is fairly consistent in similar lakes, regardless of whether the lake trout populations they contain are planktivorous or piscivorous.

In , three distinct s of lake trout persist, commonly known as "siscowet", "paperbelly" and "lean". The distinct groups operate, to some level at least, under genetic control and are not mere environmental adaptations. [Burnham-Curtis, M.K. and G.R. Smith, 1994. Osteological evidence of genetic divergence of lake trout (Salvelinus namaycush) in Lake Superior. Copeia (4):845-850.] Siscowet numbers, especially, have become greatly depressed over the years due to a combination of the extirpation of some of the fish's deep water coregonine prey and to overexploitation. Siscowet tend to grow extremely large and fat and attracted great commercial interest in the last century. Siscowet populations have rebounded since 1970, with one estimate putting the number in Lake Superior at 100 million. [http://www.seagrant.umn.edu/newsletter/2002/12/siscowet_trout_a_plague_of_riches.html]

From a zoogeographical perspective, lake trout are quite rare. They are native only to the northern parts of , principally but also and, to some extent, the northeastern . Lake trout have been introduced into many other parts of the world, mainly into but also into and certain parts of . In Canada, approximately 25% of the world's lake trout lakes are found in the province of . Even at that, only 1% of Ontario's lakes contain lake trout.

Lake trout have been known, very rarely, to hybridise in nature with the , but such hybrids are almost invariably reproductively sterile. Hybrids, known as "" are also artificially propagated in hatcheries and then planted into lakes in an effort to provide sport fishing opportunities.

The specific epithet "namaycush" derives from an indigenous North American name for the species, most likely in one of the (c.f. Ojibwe: "namegos" = "lake trout"; "namegoshens" = "rainbow trout").

*, a rock/ambient/jamband from Baltimore, Maryland.