Claridge's is a luxury hotel in Mayfair, central London. It is located at the corner of Brook Street and Davies Street.

This drawing of the current version of Claridge's was published in 1897, the year before the reopening.

Claridge's is a traditional grand hotel. Its extensive and old connections with royalty have led to it being referred to as an "extension to Buckingham Palace". It was founded in 1812 as Mivart's Hotel, located in a conventional London terraced house and grew by expanding into neighbouring houses. In 1854, the founder sold the hotel to a Mr and Mrs Claridge who owned a smaller hotel next door. They combined the two operations, and after trading for a time as "Mivart's at Claridge's", they settled on the current name. The reputation of the hotel was confirmed in 1860 when Empress Eugenie made an extended visit and entertained Queen Victoria at the hotel. 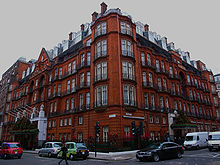 Richard D'Oyly Carte, the theatrical impressario and founder of the rival Savoy Hotel, purchased Claridge's in 1894, as part of The Savoy Group, and shortly afterwards demolished the old buildings and replaced them with the present ones. This was prompted by the need to install modern facilities such as lifts and en suite bathrooms. The new Claridge's, built by George Trollope & Sons, opened in 1898.[1] It is a Grade II listed building.[2] The hotel currently has 203 rooms and suites.

After the First World War, Claridge's flourished due to demand from aristocrats who no longer maintained a London house, and under the leadership of Carte's son, Rupert D'Oyly Carte, a new extension was built in the 1920s. Peter II of Yugoslavia and his wife spent much of the Second World War in exile at Claridge's, and suite 212 was ceded by the United Kingdom to Yugoslavia for a single day (17 June 1945) to allow their heir, Crown Prince Alexander, to be born on Yugoslav soil.[3] In December 1951 West German chancellor Konrad Adenauer secretly met with World Jewish Congress president Nahum Goldmann at Claridge's to begin negotiations on German reparations to Jewish survivors of the Holocaust.

The main restaurant is currently run by Gordon Ramsay and his head chef Steve Allen who replaced Mark Sargeant. Michelin starred Northern Irish chef Michael Deane also started his career at the restaurant. Claridge's offers afternoon tea and has been endorsed by the Tea Guild. Claridge's has two ground floor bars: a main bar and a cigar bar known as The Fumoir. A wide variety of drinks and cocktails are available here and a good stock of well-stored Cuban cigars is kept in each of the bar's humidors. The smoking ban in England has caused The Fumoir to stop selling cigars but it still serves a wide variety of scotch, bourbon, tequila, and brandy.

In 2005, The Savoy Group, including Claridge's, was sold to Quinlan Private, which sold off the Savoy Hotel and Savoy Theatre and renamed the group Maybourne Hotel Group.[4] In 2007 Claridge's gained worldwide media coverage by introducing a Water Menu containing various bottled waters sourced globally and from the United Kingdom such as Malmberg and Iskilde.[5]

As of 2009, Claridge's continues to be owned and managed by Maybourne Hotel Group, which also includes two other five-star luxury hotels in London, The Berkeley and The Connaught.