Located at the northwestern edge of Philadelphia on 45 acres (180,000 m2) overlooking the Wissahickon Creek, Chestnut Hill College opened in 1924 as a Catholic, four-year, liberal arts college for women. Founded as Mount Saint Joseph College by the Sisters of St. Joseph, the college was renamed in 1938 as Chestnut Hill College.

Throughout its history the college has aimed to offer a liberal arts education that provides students with a broad background in the humanities, social sciences and natural sciences. The goal has been to prepare students for life’s challenges by helping them to grow intellectually, spiritually, emotionally, and socially.

The curriculum has been modified over time. The college originally awarded only the Bachelor of Arts and Bachelor of Science degrees to young women of traditional college age. In 1972, a continuing education department, now called the School of Continuing Studies, was established to extend opportunities for undergraduate study to mature women and men. Many classes are conducted on evenings and weekends to accommodate the schedules of older students. The coeducational the School of Graduate Studies was established in 1980 to offer Master’s degrees; in 1997, it added a doctoral program.

Academic changes also included expanding beyond the physical limits of the campus. As a member of Southeastern Pennsylvania Consortium for Higher Education (SEPCHE), Chestnut Hill pursues a collaborative approach to higher education with seven other local institutions. Through membership in the Association of College of Sisters of St. Joseph (ACSSJ), Chestnut Hill is able to offer its students opportunities to enrich their educational experiences by studying at seven other colleges in the United States. Study-abroad programs also are available.

In November 2001 Chestnut Hill announced plans to admit men to the traditional-age, full-time undergraduate program in fall 2003. With the enrollment of male students, the 78-year-old College for Women became the School of Undergraduate Studies.

Enrollment increased dramatically after the undergraduate college became coeducational, increasing 80% by fall 2005. In 2006, college officials reported that a total of more than 2000 students were enrolled in Chestnut Hill's three constituent schools, with a total of 2,570 students expected by 2010.[1]

The Chestnut Hill campus is listed on the National Register of Historic Places. For many years the main buildings were St. Joseph Hall, with a six-story Greco-Roman rotunda and French Gothic exterior, Fournier Hall, a jewel of Italian Romanesque architecture, and Clement Hall, which houses classrooms and modest athletic facilities, including a swimming pool. The campus grounds include a grotto with a charming fountain, the House of Loretto, and an elegant main chapel that was inspired by Sainte-Chapelle in Paris. Logue Library, Fontbonne Hall, Barbara D’Iorio Martino Hall and, most recently, a new residence hall called Fitzsimmons Hall are relatively new additions to accommodate the college's growth. New structures were designed to preserve the architectural integrity of the campus while addressing specific educational or student life needs.

In recent years science facilities and computer laboratories have been renovated to help create a 21st century teaching and learning environment. Martino Hall includes “smart” classrooms and seminar rooms that are part of the campus-wide interactive network.

In 2006 Chestnut Hill announced the acquisition (from the Albert M. Greenfield Foundation for $11 million) of the Sugarloaf estate, a 30-acre (120,000 m2) property across Germantown Avenue from the existing campus, previously used as The Albert M. Greenfield Conference Center of Temple University. The additional property was expected to accommodate additional campus expansion.[1]

More than 10,000 individuals have earned degrees from Chestnut Hill College since 1924. The list of accomplished graduates includes numerous representatives in medicine, law, research, education, business and social service. One alumna, Kathleen Byerly, was among the women featured in Time magazine when the American Woman was selected Time's Person of the Year for 1975. 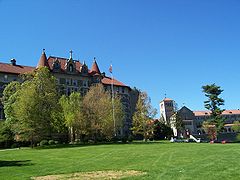 The mission of Chestnut Hill College is to provide students with holistic education in an inclusive Catholic community marked by academic excellence, shared responsibility, personal and professional growth, service to one another and to the global community, and concern for the earth.

A Bachelor of Arts degree (B.A.) may be obtained in the following majors: English, Political Science, English and Communications, Psychology, French, Spanish, History

A Bachelor of Music (B.M.) may be obtained in Music.

Chestnut Hill College's sports teams are known as the Griffins. Chestnut Hill College is an NCAA Division II institution that competes in the Central Atlantic Collegiate Conference (CACC). The College sponsors 13 varsity intercollegiate sports teams. Men's lacrosse has been established as a club team in the 2006-07 academic year, and will start its first season of Division II in Spring 2010.