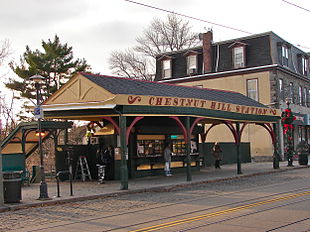 Chestnut Hill is a neighborhood in the Northwest Philadelphia section of the United States city of Philadelphia, Pennsylvania.

Chestnut Hill is bounded as follows:

The USPS does not officially correlate neighborhood names to Philadelphia ZIP codes (all are called simply "Philadelphia" or "Phila").[1] However, the 19118 ZIP code is almost entirely coterminous with the cultural-consensus boundaries of Chestnut Hill. 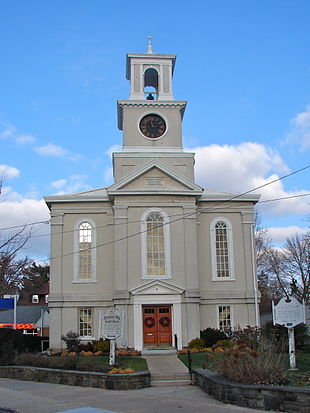 The village of Chestnut Hill was part of the German Township laid out by Francis Daniel Pastorius and came to include the settlements originally known as Sommerhausen and Crefeld, as well as part of Cresheim. It served as a gateway between Philadelphia and the nearby farmlands. During the U.S. Revolutionary War era (late 18th century), the area was one of many summer vacation spots due to its higher elevation, 400–500 feet (120 to 150 m) above sea level, and cooler temperatures than the historic Center City. Chestnut Hill is still stereotypically known as one of the more affluent sections of Philadelphia. However, there are many residents who fall within lower/middle class incomes.

From the mid-19th century through the mid-20th, the neighborhood served as the functional equivalent of both a "railroad suburb" and a "streetcar suburb" of Center City; although it was part of Philadelphia, and not a suburb, it was a leafy outlying part functioning much like a commuter town. (It still serves this function, although the streetcars are gone.) The neighborhood contains a wide variety of 19th and early 20th century residential buildings by many of the most prominent Philadelphia architects. 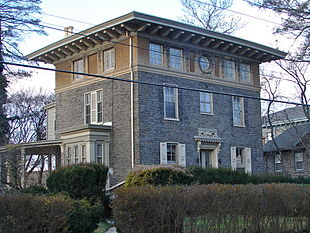 Housing in Chestnut Hill is very expensive for this region. In 2011, it had a median home sale price of $629,500—the highest of any Philadelphia neighborhood outside of Center City. This price was an increase of 57% from its 2005 median price.

The Chestnut Hill listings on the National Register of Historic Places:

Other historic and notable properties include:

Public transportation in southeastern Pennsylvania, which includes Philadelphia and the surrounding counties, is provided by SEPTA, the region's mass transit authority.

Chestnut Hill is served by SEPTA bus routes from both the City Transit Division (23, 77 and L) and the Suburban Division (94 and 134).

Trams in the southeastern Pennsylvania region are known as trolleys. The trolley network of this region was very extensive prior to World War II, but has shrunk since that era. Chestnut Hill was formerly served by trolleys. Trolley service to Chestnut Hill began in 1894, and trolley tracks still run down the Belgian-block-paved main street of the neighborhood, Germantown Avenue. SEPTA "temporarily suspended" regular trolley service in 1992.

The withering of trolley service in Philadelphia is generally unpopular with most residents. This topic generates heated emotions because it is related to the larger issue of the Great American streetcar scandal. Further discussion of the arguments and counterarguments is beyond the scope of this article. 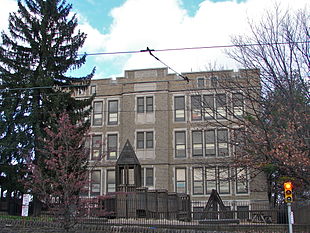 Chestnut Hill is home to many private schools, including Chestnut Hill Academy, Springside School, The Crefeld School, Norwood-Fontbonne Academy, and Our Mother of Consolation. 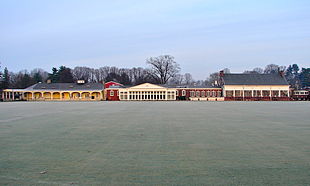 Notable residents (past and present)