Düren is a town in North Rhine-Westphalia, capital of Düren district. It is located between Aachen and Cologne on the river Rur.

Celts inhabited Düren's area before the Romans. They called their small settlement Durum (meaning castle). After the Celts other Germanic tribes settled this area. They were conquered by the Romans under Julius Caesar.

Durum became a supply area for the rapidly growing Roman city of Cologne. Furthermore, a few important Roman roads skirt Durum (including the road from Cologne to Jülich and Tongeren and the road from Cologne to Zülpich and Trier). the Romans remained in the area for about 400 years. The name "villa duria" occurred the first time in the Frankish Annals in the year 747.

After the authority of the Romans, in the 5th century the Franks came to Düren. The Frankish king Pippin der Kleine (Pippin the Short) often visited Düren in the 8th century and held a few important conventions. Pippin was the father of the famous emperor Charlemagne. The Franks made of Durum a royal palace, from which the name Palatine (Pfalz in German) is derived. Charlemagne sojourned a few times there. The castle was built at the place where the Saint Anne Church is located today. Due to the frequent visits of Charlemagne, a few markets sprang up, such as the corn market, cattle market, wood market, chicken market, and butter market, all of which contributed to Düren's development.

Düren obtained city rights in the early 13th century. Around 1200, the construction of the city wall was started, which includes 12 towers and 5 gates. The gates faced all directions: in the north, the Philippstor) and the Wirteltor, in the east the Kölntor (Cologne gate), in the south the Obertor and in the west the Holztor (wooden gate). There are still ruins of the gates today.

The chiseler Leonhard stole a small box with the relic of Saint Anne out of the Mainzer Stiftskirche St. Stephan in 1501 and brought it to Düren. Pope Julius II decided on March 18, 1506 that Düren could keep the remains. They were kept in the Martinskirche (church of Saint Martin) which was renamed the Annakirche (church of Saint Anne) in 1505. (Probably the church was renamed much later, because in the 19th century it was still called sometimes parish church of the holy Martinus). Saint Anne became the patron saint of Düren. Every year, the saint's day of Saint Anne (July 26) is celebrated for one week with the Anna octavos and the Anna parish fair, one of the biggest folk festivals of Germany.

In 1642, Düren was embroiled in the Thirty Years' War. Opposing troops destroyed the city. After the war has finally ended in 1648, plague broke out and caused many lives to be lost. A second plague epidemic broke out in 1665. Due to the various attacks on the debilitated city, Düren was destroyed again in 1679. In this time, the settlement Miesheim was destroyed, never to be rebuilt.

The businesses in the area of Düren was affected since the 15th century by the drapery and metal industry. Since the beginning of the 17th century, paper industry had settled here, advantaged by the exceptionally soft water of the Rur. Rütger von Scheven built the first paper mill in Düren. In 1812, there were already 17 paper facotries, 11 cloth- and blanket factories, one masticator and two iron foundries.

In the year 1794, Düren was occupied by French revolutionary troops. From 1798 until 1814, Düren was the main city of the same named canton in the arrondissement Aachen of the French Roerdepartements (from the name of the River Rur (Roer) and départment). After the Congress of Vienna in 1815, Düren was ceded to the Kingdom of Prussia and was subsequently administered within the Rhine Province.

By 1900, Düren was among Germany's richest cities (with 42 millionaires and 93 factories) and had a population of 27,168. By comparison, less than 5000 people had lived in Düren a century earlier.

The city of Düren was located on the main fighting front during the Allied invasion of Germany in World War II. During 1944 and 1945, the protracted and bloody Battle for Hürtgenwald was fought on Düren's district area, and on November 16, 1944, Düren was completely destroyed by Allied air bombings. Approximately 22,000 people lived in Düren at that time, and 3,000 of them died during the bombing. Those who survived were evacuated to central Germany.

On February 25, 1945, U.S. troops crossed the Rur at Düren. After the war was over in the summer that year, many evacuated people came back to the destroyed city and started to rebuild their homes against the advice of the American troops. By June 1945, the population had risen to 3806. Most of the architecture in Düren therefore dates from the 1950s. 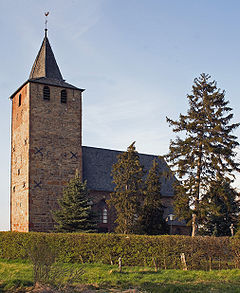 The emblem of the city of Düren is divided. It shows on the top a red castle, below that, a black eagle and in the lower half a black lion with a red tongue. The black eagle refers to the old history of Düren as a royal city and Reichsstadt. In 1242-46 Düren was bonded to the dukes of Jülich (later, Napoleon was also Duke of Jülich). Their emblem was a lion rampant, with open mouth and a red tongue.

Düren has its own radio station (Radio Rur). The station broadcasts on 92.7 and 107.5 MHz, and on cable at 87.5 MHz. There are two daily newspapers (Dürener Zeitung, Dürener Nachrichten) and several weekly papers.