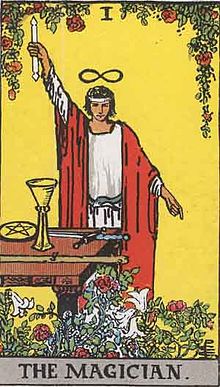 The Magician from the Waite-Smith tarot, who is depicted using the same tools that modern Wiccans use.

In the neopagan religion of Wicca, a range of magical tools are used in ritual practice.[1] Each of these tools has different uses and associations, and are used primarily to direct magical energies.[2] They are used at an altar, inside a magic circle.

In traditional Gardnerian Wicca, the tools are often divided into personal tools, which are for use by, and owned by, an individual Wiccan, and coven tools, used collectively by the coven.[3]

This practice may derive partly from Masonic traditions (such as the use of the Square and Compasses), from which Wicca draws some material,[4] and partly from the rituals of the Hermetic Order of the Golden Dawn. The latter made much use of material from medieval grimoires such as the Key of Solomon, which has many illustrations of magical tools and instructions for their preparation.[5]

In Wicca, ritual tools are used during rituals which both honour the deities, and work magic. The general idea is that the tool directs psychic energies to perform a certain action.

Wiccan tools are usually only used by their owner (or, in the case of coven tools, by the coven as a group), to ensure that they only carry their owner's spiritual vibrations.[3]

In Gardnerian Wicca, as laid down by Gerald Gardner, someone who had been initiated in the 1st degree had to create (or, alternately purchase and then engrave) their own ritual tools. One of the requirements for being initiated for the 2nd degree is that the Wiccan had to name all of the ritual tools and explain what their purpose and associations were.[3]

Before tools are used in ritual, they first are consecrated. In the Gardnerian Book of Shadows, there is a section based entirely on consecrating ritual items.[6] In this, it states that items must be consecrated within a magic circle, at whose centre lies a pentacle. Each item that is to be consecrated is in turn placed upon the pentacle, sprinkled with salt and water, and then passed through some incense. This is followed by the declaration of:

Various different tools are used in Wiccan ritual. Chief amongst them in importance are the pentacle, athame (or sword), wand and chalice, each of which represents one of the four elements of earth, air, fire and water.

The pentacle, which is a pentagram engraved on an item, is symbolic of the element of earth. This is often found on a plate, from which bread is eaten during the ritual.[7]

The athame is traditionally a black-handled knife, and Gardner described it as "the true Witch's weapon" in the Book of Shadows,[8] something for which he has been criticised by Frederic Lamond, who believes that there should be no "weapons" in Wicca.[9] The athame is used to cast a magic circle, and to control spirits. The term "athame" in its modern spelling is unique to Wicca, but originates from words found in two historical copies of the Key of Solomon, though was not included in Macgregor Mathers' published version. One version, currently held in the Biblioteque de l'Arsenal, Paris, uses the term "arthame" to describe a black handled knife. This was adopted by C.J.S Thompson in his 1927 book The Mysteries and Secrets of Magic and by Grillot de Givry, in his 1931 book Witchcraft, Magic and Alchemy. The historian Ronald Hutton theorised that Gardner got it either directly or indirectly from one of these sources, although changed the spelling.[8]

The athame is usually enscribed on the handle, sometimes in the Theban alphabet. It is never under any circumstances used to draw blood. If blood is drawn, the athame or sword loses its power, and must be destroyed and never used again.[citation needed]

In Gardnerian Wicca, the wand is symbolic for the element of Fire, though in some traditions it instead symbolises Air.[10] It can be made from any material, including wood, metal and rock, and Wiccan wands are sometimes set with gemstones or crystals.[7]

In his Book of Shadows, Gerald Gardner stated that the wand is "used to summon certain spirits with whom it would not be meet to use the athame". Frederic Lamond states that this referred to elemental spirits, who were traditionally believed to be scared of iron and steel.[3]

The chalice, or goblet, is symbolic for the element of Water. Many Wiccans do not consider it to be a tool, but instead to be a symbol of the Goddess, particularly her womb.[3] The chalice bears a lot of similarites with the Holy Grail, except for its symbolism used in Witchcraft. Rather than being the blood of Christ, it is symbolic of the Goddess' womb. The chalice is often used to hold wine, water, milk, juice and other ritual drinks.

The boline is a white handled knife, sometimes with a curved blade, like that of a crescent moon. It is used for more practical uses than the athame, for instance for harvesting and cutting herbs, inscribing candles with symbols or sigils, or cutting ritual cords. Like the athame, if blood is drawn with a ritual knife like the athame, boline, or sword, the power of the knife is dissipated, must be destroyed, and can never be used in rituals again.[citation needed]

The censer is used to dispense incense.

The scourge is used in Gardnerian Wicca to flagellate members of the coven, primarily in initiation rites. Frederic Lamond said that whilst Gardner never told his Bricket Wood coven which element this was associated with, he believed that as an "instrument for exercising power over others" then it should be Fire.[3] The scourge stands in contrast to "the Kiss" in Gardnerian and other forms of Wicca. These being representatives of the "gifts of the Goddess," the scourge standing for sacrifice and suffering one is willing to endure to learn, the kiss being the blessings of abundance in all life's aspects.

The stang is a staff with two prongs on the top of it, though in some cases these are made out of antlers.[11] It was one of the main ritual items used by the Clan of Tubal Cain which was run by the witch Robert Cochrane, and it was he who introduced this tool into Wicca.[12]

In the various forms of British Traditional Wicca, cords, known as cingulum, or singulum (which literally translates as "girdle" or "belt"), are worn about the waist by adherents. These are often given to a Wiccan upon their initiation, and worn at each subsequent ritual.[13] Traditionally they are nine feet in length (nine being three times three, the magical number), and are used to measure the circumference of the magic circle so that it can be set up correctly.[13]

In many traditions of Wicca, the colour of a person's cingulum indicates what rank of initiation they are; in several Australian covens for instance, green denotes a novice, white denotes an initiate of the first degree, blue for the second, and a plaited red, white and blue for the third, with the High Priest wearing a gold cingulum (symbolising the sun), and the High Priestess wearing silver (symbolising the moon).[13]

Wiccan High Priest Raymond Buckland said that the cingulum should not be worn, but kept especially for spellcraft.

The besom, or broom, is often associated with witches and witchcraft. In Wicca, it is used in handfasting ceremonies, when a couple jump over it. It is also used to ritually "sweep" the magic circle clean from undesirable energies.

A cauldron is often associated with Witches and Witchcraft in western culture. In Wicca, it is sometimes used to represent the womb of the Goddess, like the chalice.[citation needed] It is often used for making brews (such as oils), incense-burning, and can be used to hold large, wide pillar candles, depending on how small it is. If filled with water, a cauldron can be used for scrying. It plays a large role in Celtic magick, taking after Cerridwen's cauldron. Cerridwen was a Celtic goddess who possessed a cauldron that had a brew that took a year and a day to construct. 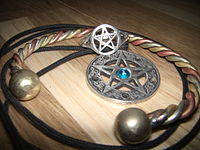 A selection of jewellery used in Wiccan ritual - most are depicting the pentagram.

In various traditions of Wicca, jewellery depicting pentacles and other relevant symbols are sometimes worn, both in ritual, and as an everyday piece of jewellery.

Doreen Valiente, the Gardnerian High Priestess, claimed that when she was initiated into the craft by Gerald Gardner, she was naked, but accidentally left her necklace on, only to be told that it was traditional for witches to wear such things.[14]

In the tradition of Seax-Wica, the spear is used as a ritual tool as it is symbolic of the god Woden, who, in that tradition, is viewed as an emanation of God in place of the Horned God. According to Norse mythology, the god Odin, who is the Norse equivalent to the Anglo-Saxon Woden, carried the spear Gungnir.

Ritual tools from the Key of Solomon.

There are elaborate rituals prescribed for the creation and consecration of magical tools.[15] These often include the ritual passing of the tool through representations of the four elements. Some tools are ascribed correspondences to a particular element, one commonly cited correspondence being:[16]

Earth - Pentacle
Fire - Wand
Air - Sword
Water - Chalice
These four tools may be seen in the occult tarot deck designed by Golden Dawn members A.E.Waite and Pamela Colman Smith, most obviously in the card known as The Magician. Some practitioners distinguish High Magic and Low Magic. The former is based on Ceremonial magic and may be more commonly practiced in Alexandrian covens. The latter is more typical of the Hedgewitch, who would be more likely to use everyday tools and utensils, rather than fabricating specially made magical tools.[17]