Hermetic Order of the Golden Dawn

Hermetic Order of the Golden Dawn
This article is about the historical organization of the late 19th century. For similar later organizations, see Golden Dawn (disambiguation).

The Hermetic Order of the Golden Dawn (or, more commonly, the Golden Dawn) was a magical order active in Great Britain during the late 19th and early 20th centuries, which practiced theurgy and spiritual development. It has been one of the largest single influences on 20th-century Western occultism.[1][2]

Concepts of magic and ritual at the center of contemporary traditions, such as Wicca[3][4] and Thelema, were inspired by the Golden Dawn.

The three founders, William Robert Woodman, William Wynn Westcott, and Samuel Liddell MacGregor Mathers were Freemasons and members of Societas Rosicruciana in Anglia (S.R.I.A.).[5] Westcott appears to have been the initial driving force behind the establishment of the Golden Dawn.

The Golden Dawn system was based on hierarchy and initiation like the Masonic Lodges; however women were admitted on an equal basis with men. The "Golden Dawn" was the first of three Orders, although all three are often collectively referred to as the "Golden Dawn". The First Order taught esoteric philosophy based on the Hermetic Qabalah and personal development through study and awareness of the four Classical Elements as well as the basics of astrology, tarot divination, and geomancy. The Second or "Inner" Order, the Rosae Rubeae et Aureae Crucis (the Ruby Rose and Cross of Gold), taught proper magic, including scrying, astral travel, and alchemy. The Third Order was that of the "Secret Chiefs", who were said to be highly skilled; they supposedly directed the activities of the lower two orders by spirit communication with the Chiefs of the Second Order.

Folio 13 of the Cipher Manuscripts

The foundational documents of the original Order of the Golden Dawn are known as the Cipher Manuscripts; they were written in English using Trithemius cipher. The Manuscripts give the specific outlines of the Grade Rituals of the Order and prescribe a curriculum of graduated teachings that encompass the Hermetic Qabalah, astrology, occult tarot, geomancy, and alchemy.

According to the records of the Order, the manuscripts were passed from Kenneth Mackenzie, a Masonic scholar, to Rev. A.F.A. Woodford, whom British occult writer Francis King describes as the fourth founder[6] (although Woodford died shortly after the Order was founded).[7] The documents did not excite Woodford and in February 1886 he passed them on to Freemason William Wynn Westcott, who managed to decode them in 1887.[6] Westcott was pleased with his discovery and called on fellow Freemason Samuel Liddell MacGregor Mathers for a second opinion. Westcott asked for Mathers' help to turn the manuscripts into a coherent system for lodge work. Mathers in turn asked fellow Freemason William Robert Woodman to assist the two and he accepted.[6] Mathers and Westcott have been credited for developing the ritual outlines in the Cipher Manuscripts into a workable format.[8] Mathers, however, is generally credited with the design of the curriculum and rituals of the Second Order, which he called the Rosae Rubae et Aureae Crucis ("Ruby Rose and Golden Cross" or the RR et AC).[9]

In October 1887, Westcott wrote to Anna Sprengel, whose name and address he received through the decoding of the Cipher Manuscripts. Westcott claimed to receive a wise reply which conferred honorary grades of Adeptus Exemptus on Westcott, Mathers, and Woodman and chartered a Golden Dawn temple consisting of the five grades outlined in the manuscripts.[10][11]

In 1888, the Isis-Urania Temple was founded in London,[10] where the rituals decoded from the cipher manuscripts were developed and practiced.[12] In addition, there was an insistence on women being allowed to participate in the Order in "perfect equality" with men, in contrast to the S.R.I.A. and Masonry.[11] This first lodge did not teach any magical practices per se (except for basic "banishing" rituals and meditation), but was rather a philosophical and metaphysical teaching order. It was called "the Outer Order" or "First Order" and for four years the Golden Dawn existed only in this order. The "Inner Order", which became active in 1892, was the circle of adepts who had completed the entire course of study for the Outer Order. This group eventually became known as the Second Order.[citation needed]

In a short time, the Osiris temple in Weston-super-Mare, the Horus temple in Bradford, and the Amen-Ra temple in Edinburgh were founded. A few years after this, Mathers founded the Ahathoor temple in Paris.[10]

In 1891, Westcott's correspondence with Anna Sprengel suddenly ceased, and he received word from Germany either that she was dead or that her companions did not approve of the founding of the Order and no further contact was to be made. If the founders were to contact the Secret Chiefs, therefore, it had to be done on their own.[10] In 1892, Mathers claimed a link to the Secret Chiefs had been formed and supplied rituals for the Second Order, called the Red Rose and Cross of Gold.[10] These rituals were based on the tradition of the tomb of Christian Rosenkreuz, and a Vault of Adepts became the controlling force behind the Outer Order.[13] Later in 1916, Westcott claimed that Mathers also constructed these rituals from materials he received from Frater Lux ex Tenebris, a purported Continental Adept.[14]

Some followers[who?] of the Golden Dawn tradition believe that the Secret Chiefs are not necessarily living humans or supernatural beings, but are rather symbolic of actual and legendary sources of spiritual esotericism, a great leader, or teacher of a spiritual path or practice that found its way into the teachings of the Order.[15]

By the mid 1890s, the Golden Dawn was well established in Great Britain, with membership rising to over a hundred and including every class of Victorian society.[7] In its heyday, many celebrities belonged to the Golden Dawn, such as actress Florence Farr, Irish revolutionary Maud Gonne, Irish writer William Butler Yeats, Welsh author Arthur Machen, English author Evelyn Underhill, and English writer Aleister Crowley.

Around 1897, Westcott broke all ties to the Golden Dawn, leaving Mathers in control. It is speculated that this was due to some occult papers having been found in a hansom cab, in which Westcott's connection to the Golden Dawn came to the attention of his superiors. He may have been told to either resign from the Order or to give up his occupation as coroner.[16] After Westcott's departure, Mathers appointed Florence Farr to be Chief Adept in Anglia.

Mathers was the only active founding member after Westcott's "departure". However, due to personality clashes with other members and absences from the center of Lodge activity in Great Britain, challenges to Mathers' authority as leader developed among the members of the Second Order.[17]

Towards the end of 1899, the Adepts of the Isis-Urania and Amen-Ra temples had become dissatisfied with Mathers' leadership as well as his growing friendship with Crowley. They were also anxious to make contact with the Secret Chiefs themselves, instead of relying on Mathers.[18] Among the personal disagreements within the Isis-Urania temple, disputes were arising from Florence Farr's The Sphere, a secret society within the Isis-Urania, and the rest of the Adepts Minor.[18]

Crowley was refused initiation into the Adeptus Minor grade by the London officials. Mathers overrode their decision and quickly initiated him at the Ahathoor temple in Paris on January 16, 1900.[19] Upon his return to the London temple, Crowley requested the grade papers to which he was now entitled from Miss Cracknell, the acting secretary. To the London Adepts, this was the last straw. Farr, already of the opinion that the London temple should be closed, wrote to Mathers expressing her wish to resign as his representative, though she was willing to carry on until a successor was found.[19] Mathers replied on February 16, believing Westcott was behind this turn of events. Once the other Adepts in London were notified, they elected a committee of seven on March 3 and requested a full investigation of the matter. Mathers sent an immediate reply, declining to provide proof, refusing to acknowledge the London temple, and dismissing Farr as his representative on March 23.[20] In response, a general meeting was called on March 29 in London to remove Mathers as chief and expel him from the Order.[21]

In 1901, W. B. Yeats privately published a pamphlet titled Is the Order of R. R. & A. C. to Remain a Magical Order?[22] After the Isis-Urania temple claimed its independence, there were even more disputes, leading to Yeats resigning.[23] A committee of three was to temporarily govern, which included P.W. Bullock, M.W. Blackden and J. W. Brodie-Innes. After a short time, Bullock resigned, and Dr. Robert Felkin took his place.[24]

In 1903, A.E. Waite and Blackden joined forces to retain the name Isis-Urania, while Felkin and other London members formed the Stella Matutina, Yeats remaining in it until 1921, and Brodie-Innes continued his Amen-Ra temple in Edinburgh.[25]

Once Mathers realised that reconciliation was impossible, he made efforts to reestablish himself in London. The Bradford and Weston-super-Mare temples remained loyal to him, but their numbers were few.[26] He then appointed Edward Berridge as his representative.[27] According to Francis King, historical evidence shows that there were "twenty three members of a flourishing Second Order under Berridge-Mathers in 1913."[27]

J.W. Brodie-Innes continued leading the Amen-Ra temple, deciding that the revolt was unjustified. By 1908, Mathers and Brodie-Innes were in complete accord.[28] According to sources that differ regarding the actual date, sometime between 1901 and 1913 Mathers renamed the branch of the Golden Dawn remaining loyal to his leadership to Alpha et Omega.[29][30][31][32] Brodie-Innes assumed command of the English and Scottish temples, while Mathers concentrated on building up his Ahathoor temple and extending his American connections.[30] According to occultist Israel Regardie, the Golden Dawn had spread to the United States of America before 1900 and a Thoth-Hermes temple had been founded in Chicago.[28][30] By the beginning of the First World War in 1914, Mathers had established two to three American temples.

Most temples of the Alpha et Omega and Stella Matutina closed or went into abeyance by the end of the 1930s, with the exceptions of two Stella Matutina temples: Hermes Temple in Bristol, which operated sporadically until 1970, and the Whare Ra in Havelock North, New Zealand, which operated regularly until its closure in 1978.[33][34] 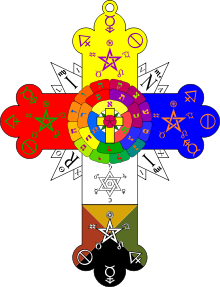 Rosy Cross of the Golden Dawn

Much of the hierarchical structure for the Golden dawn came from the Societas Rosicruciana in Anglia, which was itself derived from the Order of the Golden and Rosy Cross.[35]

The First Order Grades were related to the four elements of Earth, Air, Water, and Fire, respectively. The Aspirant to a Grade received instruction on the metaphysical meaning of each of these Elements and had to pass a written examination and demonstrate certain skills to receive admission to that Grade.

After passing the Portal, the Aspirant was instructed in the techniques of practical magic. When another examination was passed, and the other Adepts consented, the Aspirant attained the Grade of Adeptus Minor (5=6). There were also four sub-Grades of instruction for the Adeptus Minor, again relating to the four Outer Order grades.

A member of the Second Order had the power and authority to initiate aspirants to the First Order, though usually not without the permission of the Chiefs of his or her Lodge.

The Golden Dawn as system and book has been the most intensively used source for modern western occult and magical writing. As a book it is both a text and an encyclopedia.[37]

While no temples in the original chartered lineage of the Golden Dawn survived past the 1970s,[33][34] several organizations have since revived its teachings and rituals. Among these, the following are notable: