Percutaneous endoscopic gastrostomy is an endoscopic medical procedure in which a tube (PEG tube) is passed into a patient's stomach through the abdominal wall, most commonly to provide a means of feeding when oral intake is not adequate. The procedure is an alternative to surgical gastrostomy insertion, and does not require a general anesthetic; mild sedation is typically used. PEG tubes may also be extended into the small intestine by passing a jejunal extension tube (PEG-J tube) through the PEG tube and into the jejunum via the pylorus.[1]

PEG administration of enteral feeds is the most commonly used method of nutritional support for patients in the community. Many stroke patients, for example, are at risk of aspiration pneumonia due to poor control over the swallowing muscles; some will benefit from a PEG performed to maintain nutrition. PEGs may also be inserted to decompress the stomach in cases of gastric volvulus.[2]

Gastrostomy may be indicated in numerous situations, usually those in which normal or nutrition (or nasogastric) feeding is impossible. The causes for these situations may be neurological (e.g. stroke), anatomical (e.g. cleft lip and palate during the process of correction) or other (e.g. radiation therapy for tumors in head & neck region).

In certain situations where normal or nasogastric feeding is not possible, gastrostomy may be of no clinical benefit. In advanced dementia, studies show that PEG placement does not in fact prolong life.[3] Quality improvement protocols have been developed with the aim of reducing the number of non-beneficial gastrostomies in patients with dementia.[4]

A gastrostomy can be placed to decompress the stomach contents in a patient with a malignant bowel obstruction. This is referred to as a "venting PEG" and is placed to prevent and manage nausea and vomiting.

A gastrostomy can also be used to treat volvulus of the stomach, where the stomach twists along one of its axes. The tube (or multiple tubes) is used for gastropexy, or adhering the stomach to the abdominal wall, preventing twisting of the stomach.[2]

A PEG tube can be used in providing gastric or post-surgical drainage.[5]

Two major techniques for placing PEGs have been described in the literature.

The Gauderer-Ponsky technique involves performing a gastroscopy to evaluate the anatomy of the stomach. The anterior stomach wall is identified and techniques are used to ensure that there is no organ between the wall and the skin:

In the Russell introducer technique, the Seldinger technique is used to place a wire into the stomach, and a series of dilators are used to increase the size of the gastrostomy. The tube is then pushed in over the wire.[7]

As with the case of other types of feeding tubes, care must be made to place PEGs into an appropriate population. The following are contraindications to PEG use:[8] 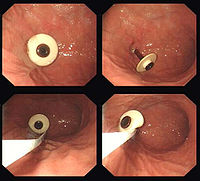 PEG tubes with a collapsible or deflatable bumper can be removed using traction (simply by pulling the PEG tube out through the abdominal wall).

The first percutaneous endoscopic gastrostomy performed on a child was on June 12, 1979 at the Rainbow Babies and Children's Hospital, University Hospitals of Cleveland. Dr. Michael W.L. Gauderer, pediatric surgeon, Dr. Jeffrey Ponsky, endoscopist, and Dr. James Bekeny, surgical resident, performed the procedure on a four-and-one-half-month old child with inadequate oral intake.[10] The authors of the technique, Dr. Michael W.L. Gauderer and Dr. Jeffrey Ponsky, first published the technique in 1980.[11] In 2001, the details of the development of the procedure were published, the first author being the originator of the technique itself.[6]