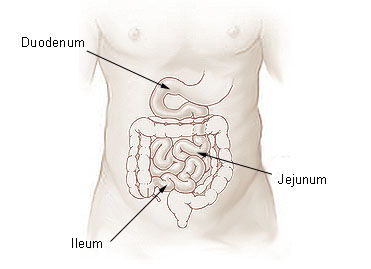 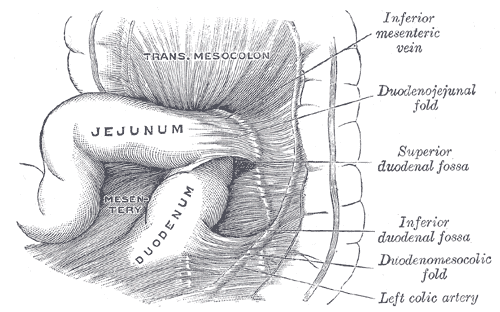 Caption2 = Superior and inferior duodenal fossæ.
Precursor =
System =
Artery =
Vein =
Nerve = , [GeorgiaPhysiology|6/6ch2/s6ch2_30]
Lymph =
MeshName = Jejunum
MeshNumber = A03.556.124.684.500
DorlandsPre =
DorlandsSuf =
In of the , the jejunum is the central of the three divisions of the and lies between the and the . The change from the duodenum to the jejunum is usually defined as the .

In adult s, the small intestine is usually between 5.5-6m long, 2.5m of which is the jejunum.

The in the jejunum is usually between 7 and 8 (neutral or slightly ).

The jejunum and the ileum are suspended by which gives the bowel great mobility within the . It also contains muscles to help move the food along.

The inner surface of the jejunum, its , is covered in projections called villi, which increase the surface area of tissue available to absorb nutrients from the gut contents. The epithelial cells which line these villi possess even larger numbers of microvilli. The transport of nutrients across epithelial cells through the jejunum and ileum includes the of sugar fructose and the of amino acids, small peptides, vitamins, and most glucose. The villi in the jejunum are much longer than in the duodenum or ileum.

The jejunum contains very few (found in the duodenum) or (found in the ileum). Instead, it has many large in its called plicae circulares which increase the surface area for nutrient absorption.

"Jejunum" is derived from the adjective "jejune", which means "" or "hungry" in .It was so called because this portion of the intestine was found "empty" following death Fact|date=April 2007 [Latin: jejunus, fasting; barren]