Revered by Essendon supporters, he was often referred to simply as "King Richard".[1] 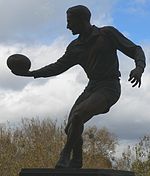 The most notable highlights of Reynolds career include:

Off the field, Reynolds was a shy and private man, noted for his humility about his footballing achievements. Just three days before his death, after being given a standing ovation by the crowd at the "Champions of Essendon" announcement dinner, at which he was named the greatest Essendon player of all time, Reynolds was visibly moved and stated "I don't deserve this honour... Bill Hutchison was the best player I ever saw."[4]

His family's link with Essendon continued when his grandson Joel Reynolds was selected by the club in the 2001 AFL Draft. He made his debut in Round 3, 2002 against Brisbane at the Gabba, with Dick watching from the stands.

A statue in his honour was erected in 2004 at the Parade of Champions at the Melbourne Cricket Ground.[5]