The Percival Prince was a British light transport of the early post-war period. It was a twin-engine, high-wing, cantilever monoplane of all-metal stressed-skin construction; the undercarriage was of retractable, tricycle type.

The design of the Prince followed on from the solitary Merganser. Further development of the type led to the Survey Prince survey aircraft and the Sea Prince. An improved version of the Prince 3 with an increased wingspan and engine and undercarriage modifications was developed for the Royal Air Force as the Percival Pembroke.

The Prince was produced in six marks for the civil market.

The Sea Prince operated in two roles: in T.Mk.1 form it served as a navigation and anti-submarine trainer; the C.Mks. 1 and 2 were flown in the transport role. However, these were landplanes and not COD (carrier on-board delivery) aircraft. Sea Princes operated in both roles from 1954 to 1972 and as a navigation trainer until 1978, when it was replaced by the Handley Page Jetstream

Sea Prince T.1 preserved at the Gatwick Aviation Museum in 2008 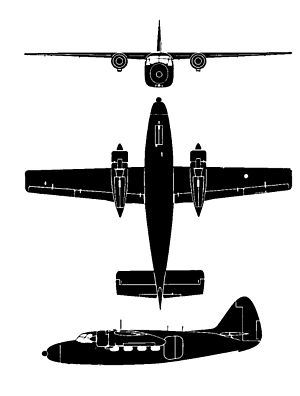 Data from British Naval Aircraft since 1912 [2]