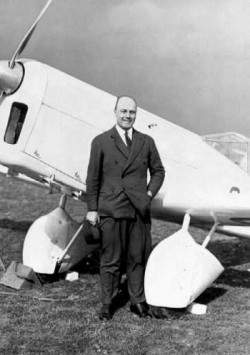 Edgar W. Percival was born in 1898 at . (Albury and its sister town Wodonga sit either side of the Victoria/New South Wales border.) Percival's maternal grandfather was , the Swedish philosopher. Early childhood saw Percival assisting in the running of the large family farm situated on the river flats of the Hawkesbury. As a child, he was fascinated by the advances made in aviation especially after seeing his first aeroplane in 1911 when the local dental surgeon, William Ewart Hart flew to the council field in Richmond, near the Percival property. Becoming friends with the pilot and helping in small ways in maintaining the aircraft, led to Percival receiving, as a reward, his first flight. By 1912, he had designed, produced and flown his own gliders, beginning a life-long passion for this designer-pilot. After attending Fort Street High School, Sydney, he enrolled at , later applying and receiving an apprenticeship at an engineering firm before being accepted at .

After the declaration of war, Edgar Percival joined the 7th Australian Light Horse in 1915, being stationed in the Middle East, but by 1916 he transferred to the Royal Flying Corps (R.F.C.). After going solo in 20 minutes in 1917, he was assigned to a combat squadron in France flying fighters in 's No. 60 Squadron. Percival flew many sorties accompanying the Canadian ace. Noted for his flying skills, he was promoted to Captain, and later transferred to No. 11 Squadron as one of its founding members, seeing service in the Middle East and Greece. In 1918, while still in the services and posted to Egypt, Percival designed his first powered aircraft, "a special-purpose aircraft based on the Bristol F.2B, with the Rolls-Royce Eagle engine

Following the First World War, Percival returned to Australia with three surplus aircraft, two s and a aircraft to do film work, stunt flying and barnstorming plus charter flights, operating his own charter company.

In Australia, Percival began to take a further interest in aircraft design; he built the winning entry in the 1924 Australian Aero Club competition to design a light aircraft. In 1926, flying an aircraft that he helped design, he competed in a Federal Government challenge for both design and piloting skills, winning £940 in prize money.

Later in the same year, Percival was involved in a landmark series of proving flights that helped establish the use of carrier-borne fighters, culminating in his being catapulted in a "navalised" off the USS "Idaho" battleship, at .

Percival returned to England in 1929 where he was appointed as an Air Ministry test pilot, specializing in amphibians, seaplanes and racers and went on to set up his own firm, the Percival Aircraft Company, to produce his aircraft designs. Edgar Percival was also very active as a pilot during the interwar period; not only did he compete with regular success, but his designs were widely used by other racing and record-setting pilots who held his products in very high regard. Noted racing pilots of the time who also flew Percival's machines included C.W.A. Scott, Jim and Amy Mollison, Charles Gardner and Giles Guthrie. Many came to Percival to have their machines specially built and modified for the task in hand – usually to extend their already long range. Percival was a noted character on the air racing scene at the time, and was often referred to in the aeronautical press of the day as "The Hat," an epithet resulting from his omnipresent hat, which, characteristically (and resplendent in a lounge-suit), he also wore while flying. He was respected as a highly competitive and able pilot, taking great pride in being awarded the prize for "fastest time" in handicap air racing, as well as being a rather fiery, impatient and irascible businessman and employer. During this period, Edgar Percival served in the Reserve of Air Force Officers, 1929-1939 and was a founding member of the .

Percival's interest in aircraft technology led him to design the Saro Percival Mail Carrier (1930), one of a series of collaborative projects with Saunders Roe Ltd. Having had interests in the company which he sold in 1932, Percival began searching for an established manufacturer to produce a "light" aeroplane that he had designed which he called the "."

Running the business from his private address in London (20, Grosvenor Square [ Silvester 1983, p. 6.] ), Percival then arranged for series production to be contracted out to George Parnal & Sons, of , Gloucestershire, an arrangement that lasted two years. Percival Aircraft was officially formed in 1933. In 1934, after 24 Gulls had been produced at Parnalls, Percival set up his own factory at London Gravesend Airport, Kent.

Edgar Percival's aircraft were renowned for their graceful lines and outstanding performance. As a noted test pilot, Percival continued to fly his own creations; in 1935, he flew a Gull from England to Morocco to England winning the . Other famous aviators were associated with Percival aircraft; in 1933, flew a Four named "Miss Southern Cross" from England to Australia in the record breaking time of 7 days, 4 hours and 44 minutes. The New Zealand aviatrix, , also used the Percival Gull to fly from England to Australia in October 1936. A pure racing derivative of the Gull series, the flown by other illustrious pilots such as and would go on to set many speed and distance records in the 1930s.

In late 1936, Percival transferred production to larger facilities at the newly built Luton Corporation Airport in Bedfordshire. A two-bay hangar was constructed to accommodate the workshops while the design offices were set up in the original Georgian farmhouse situated nearby [ Silvester 1983, p. 66. ] . Production at Luton was then primarily focused on the Vega Gull. A small twin-engined machine, the Q6 was also produced in limited quantities, using a pair of de Havilland Gipsy Six Series II powerplants equipped with variable-pitch airscrews. Again, the same basic method of construction was employed and the finished result was an aesthetically pleasing and aerodynamically clean feederliner of its day that represented the final new design produced by the company prior to Edgar Percival selling his interests in the company.

In 1938 with war imminent, Percival developed a military communications and R/T operator training version of the Vega Gull known as the Proctor. This rugged three-seater was powered by a 205 hp Gipsy Queen II engine. During the Second World War, a great deal of Proctor production was sub-contracted out and the designs of other firms, including the and were, in turn, produced by Percival Aircraft at Luton [ Silvester 1983, p. 173. Note: 1,300 Oxfords and 245 Mosquito aircraft were constructed at Percival Aircraft.] . In March 1940, Capt. Percival resigned from the company, his dual roles being taken up by Capt. P.D. Acland (formerly Aviation Manager of Vickers Ltd.) who was appointed Managing Director and Arthur Bage becoming the Chief Designer. [ Ellison 1997, p. 38.] During the war years, Percival served in the Royal Air Force Volunteer Reserve.

in September 1944, Percival Aircraft was bought out by Hunting & Son Ltd and Edgar Percival sold his interest in his company and moved to the United States to continue work on engine technology. From 1954, his original company began trading under the name Hunting Percival Aircraft Ltd. although the Percival name was finally dropped from the company title in 1957.

In 1948, Edgar Percival became a naturalized US citizen and in 1951 he went to New Zealand where he was involved with pioneering aerial application efforts. In 1954, Percival formed Edgar Percival Aircraft Limited (at , England), a new company after his original company became part of the Hunting Group. His first new design, the was a utility aircraft well suited to agricultural use. A total of 21 were constructed before Percival sold his company in 1960 to Samlesbury Engineering; the new company formed to continue aircraft construction of the E.P.9.

Edgar Percival was working on new aviation projects in the UK and New Zealand at the time of his death in 1984.