Constance Albanese "Connie" Morella (born February 12, 1931) is a Republican United States politician who represented Maryland's 8th congressional district in the United States House of Representatives from 1987 to 2003. She also served as Permanent Representative to the Organization for Economic Co-operation and Development (OECD) from 2003 to 2007. She currently serves on American University's faculty as an Ambassador in Residence for the Women in Politics Institute. She was appointed to the American Battle Monuments Commission (ABMC) by President Barack Obama in 2010.

She was born Constance Albanese in Somerville, Massachusetts. After graduating from Somerville High School in 1948 she earned an Associate of Arts from Boston University in 1950 and an Bachelor of Arts from the same institution in 1954. Although raised in a family of blue-collar Democrats, she became a Republican after meeting Anthony C. Morella, who had worked for liberal Republicans John Lindsay, Nelson Rockefeller, Charles Mathias, and others. After they wed, the couple moved to Bethesda, Maryland.

Connie Morella became a secondary school teacher in the Montgomery County, Maryland, public schools from 1957 to 1961. She graduated from American University with an M.A. in 1967 and was an instructor there from 1968 to 1970, when she became a professor at Montgomery College in Rockville, Maryland. She continued to teach until 1985, but her political career gradually displaced her educational one.

Morella was appointed as a founding member to the Montgomery County Commission for Women, an advisory women's advocacy body, in 1971, and elected its president in 1973. She also became active in the League of Women Voters. In 1974, she ran unsuccessfully for the Maryland House of Delegates from the 16th District (Bethesda). She ran again in 1978, not only winning a seat but receiving more votes than the three previous incumbents. She was returned to the state legislature for an additional term, before running for United States Congress.

In 1986, Morella ran for the open Congressional seat in Maryland's 8th congressional district. The district was being vacated by Democrat Michael Barnes, who was pursuing an unsuccessful bid for the Democratic nomination to the U.S. Senate. Morella's opponent in the general election was State Senator Stewart Bainum, a multimillionaire business executive who consistently outpolled her throughout most of the campaign. A major turning point came when Morella unexpectedly won endorsements from the Baltimore Sun and the Washington Post, an unusual feat for a Republican candidate in the race for an open Congressional seat in Maryland. Many analysts credit the endorsements for Morella's narrow victory in November. She was the first woman to hold this seat. Although a Republican in an area that had become heavily Democratic, she proved highly popular among her constituents and won re-election seven times, serving until 2002. 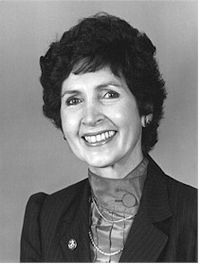 Morella opposes her party's positions on abortion, gun control, gay rights, and the environmental movement, voted for government funding of contraceptives and needle exchange programs for drug addicts, and favored the legalization of medical marijuana. She also received some support from organized labor and opposed many tax cuts. She voted against declaring English the official language of the United States and in 1996 against a bill overwhelmingly approved by Congress and signed by President Bill Clinton, to combat illegal immigration. In 1996 she was one of only five Republicans to vote against the Cuban Liberty and Democratic Solidarity Act. In 1998 she was one of only three Republicans to vote against renaming the Washington National Airport the Ronald Reagan Washington National Airport. Morella was the only Republican in the entire Congress to have voted against approving both the use of military force in Iraq in 1991 and in 2002. Indeed, by many surveys, her voting record was consistently one of the most liberal of any Republican in the House.

Morella was active in human rights, women's health, and domestic violence issues in Congress, and served on the Science and Government Reform Committees. She was U.S. representative to the 1994 U.N. International Conference on Population and Development in Cairo and co-chair of the Congressional delegation to the 1995 U.N. Fourth World Conference on Women in Beijing. Among the legislation she sponsored were the 1992 Battered Women's Testimony Act, which provided funds for indigent women to hire expert testimony in domestic abuse cases, and the Judicial Training Act, which funded programs to educate judges about domestic violence, especially in child custody cases.

Morella came under greater pressure after her party took control of the House in 1994 Congressional elections. Although she signed the Contract with America developed by Newt Gingrich, she had a mixed record supporting the subsequent Republican majority in Congress. She did not openly challenge the new House leadership until 1997 when she voted "present" for Speaker of the House instead of for the incumbent, Newt Gingrich. In 1998, she was one of four Republicans, along with Amo Houghton and Peter T. King of New York and Chris Shays of Connecticut, to oppose all four articles of impeachment against Clinton during the Lewinsky scandal.

As a Republican congresswoman representing an affluent Democratic district in an increasingly Democratic state, Morella faced a succession of increasingly strong Democratic challengers. While she managed to fend them all off (even in the big Democratic years of 1992, 1996 and 1998), the low popularity of the Republican-controlled Congress gradually undermined her. She tried to portray herself as giving her district a place at the table, but starting with Terry Lerman's race in 2000 where he claimed that a vote for Morella was a vote to keep Tom DeLay and other Republicans unpopular to district voters in power. It was virtually taken for granted that Morella would be succeeded by a Democrat if she retired. It was also taken for granted that if Morella retired or was defeated in an election, it would be a long time before another Republican won the seat.

Maryland Senate President Thomas V. "Mike" Miller specifically stated that he intended to draw Morella's district out from under her after her relatively narrow reelection in 2000. The Democrats controlled both the State Legislature and the Governor's Office in 2000, thus controlling the redistricting for the 2000 Census. Staffers from Senate President Miller, House Speaker Cas Taylor, and Governor Parris Glendening drew new maps to gerrymander out Morella and fellow moderate Republican Bob Ehrlich.[1] One proposal went so far as to divide her district in two, effectively giving one to State Senator Chris Van Hollen and forcing Morella to run against popular Delegate and Kennedy political family member Mark Shriver.

The final redistricting plan was less ambitious but still made the already Democratic 8th district even more Democratic. It restored a heavily Democratic spur of eastern Montgomery County removed in the 1990 redistricting and added nine precincts in Prince George's County from Al Wynn's heavily Democratic 4th district.[1] Although it forced Van Hollen and Shriver to run against each other in an expensive primary, Van Hollen defeated Morella in 2002 with 52 percent of the vote to Morella's 47 percent. Van Hollen trounced her in the Prince George's portion of the district, an area that Morella did not know and that did not know her. But Morella also lost the Montgomery portion of the district 51% to 48%. [2] She did carry some but not all of the precincts she'd previously represented.

Ambassador to the OECD

President George W. Bush appointed her United States Permanent Representative to the Organization for Economic Cooperation and Development (OECD) on July 11, 2003. She was unanimously confirmed by the United States Senate on July 31 and sworn in on October 8 of that year, becoming the first former member of Congress to serve as ambassador to the OECD. She is an honorary board member of the National Organization of Italian American Women.

Morella has received honorary doctorates from American University, 1988; Norwich University, 1989; Dickinson College, 1989; Mt. Vernon College, 1995; University of Maryland University College, 1996; University of Maryland, 1997; Uniformed Services University of the Health Sciences, 1997; Elizabethtown College, 1999; Washington College, 2000; and National Labor College, 2004. Her numerous awards and recognitions include induction into the Maryland Women's Hall of Fame,[4] the Ron Brown Standards Leadership Award, and public service awards from the American Medical Association, the American Bar Association, and the Hubert H. Humphrey Civil Rights Award from the Leadership Conference on Civil Rights "for selfless and devoted service in the cause of equality." The Republic of Italy awarded her the Medal of the Legion of Merit. She was also given the Foremothers Award by The National Research Center for Women and Families in 2008.