Huey Lewis and the News

Huey Lewis and the News

Huey Lewis and the News is an American rock band based in San Francisco, California. They had a run of hit singles during the 1980s and early 1990s, eventually scoring a total of 19 top-ten singles across the Billboard Hot 100, Adult Contemporary and Mainstream Rock charts. Their greatest success was in the 1980s with the number-one album, Sports, coupled with a series of highly successful MTV videos. Their worldwide fame expanded when the song "The Power of Love" was featured as a key track in the film Back to the Future, became a number-one hit, and nominated for an Academy Award. The News combined a rock (and sometimes, a "blues-rock") backing with soul and doo-wop-influenced harmony vocals and Lewis' voice.

In 1972, singer–blues harmonica player Huey Lewis and keyboardist Sean Hopper joined the Bay Area jazz-funk band Clover. Clover would record several albums in the 1970s, and in the middle of the decade transplanted themselves to England to become part of the UK pub rock scene for a time. Without Lewis (but with Hopper), they eventually became the original backing band for Elvis Costello's first album My Aim Is True. Lewis also worked with Irish band Thin Lizzy, contributing harmonica to the song "Baby Drives Me Crazy," recorded onstage for the Live And Dangerous album. Lizzy bassist/vocalist Phil Lynott introduces Lewis by name during the song.

The band returned to the Bay Area by the end of the 1970s.

Clover's main competition in the Bay Area jazz-funk scene was a band called Soundhole, whose members included drummer Bill Gibson, saxophonist–guitarist Johnny Colla, and bassist Mario Cipollina (younger brother of John Cipollina). Like Clover, Soundhole had spent time backing a famous singer, Van Morrison. After getting a singles contract from Phonogram Records in 1978, Huey Lewis united his former bandmate and three of his former rivals to form a new group, Huey Lewis & The American Express. In 1979 they recorded and released a single, "Exo-Disco" (a disco version of the theme from the film Exodus), that was largely ignored. The B-side of this record, "Kick Back", was a song that had previously been performed live by Lewis and his former band, Clover. In 1979, the band wooed guitarist Chris Hayes and moved to Chrysalis Records. After the credit card organization American Express complained, in January 1980 they changed their name to Huey Lewis and the News.

Later in 1980, the band issued their first album, a self-titled LP, Huey Lewis and the News. It went largely unnoticed. In 1982, the band released their second album, the self-produced Picture This. The album turned gold, fueled by the breakout success of the hit single "Do You Believe in Love", written by former Clover producer Mutt Lange. Largely because of the single, the album remained on the Billboard 200 album chart for 35 weeks and peaked at No. 13. The follow-up singles from Picture This, "Hope You Love Me Like You Say You Do" and "Workin' for a Livin'", followed with limited success, though the video for "Workin' for a Livin'" received considerable airplay on MTV and HBO's Video Jukebox.[citation needed]

Due to record label delays on the release of their third album, Sports, Huey Lewis and the News was back to square one in late 1983, touring small clubs in a bus to promote the record (eventually known as the "Workin' for a Livin'" tour). The new album initially hit No. 6 in the U.S. when first released. However, Sports slowly became a number-one hit in 1984 and multi-platinum success in 1985, thanks to the band's frequent touring and a series of videos that received heavy MTV airplay. Four singles from the album reached the top ten of the Billboard Hot 100: "Heart and Soul" reached No. 8, while "I Want a New Drug," "The Heart of Rock & Roll," and "If This Is It" all reached No. 6. The album has sold over 10 million copies in the U.S. alone.

Their song "The Power of Love" was a number-one U.S. hit and featured in the 1985 film Back to the Future, for which they also recorded the theme song, "Back in Time". Lewis has a cameo appearance in the film as a faculty member who rejects Marty McFly's band's audition for the school's "Battle of the Bands" contest. As an inside joke, the piece the band plays is an instrumental heavy metal version of "The Power of Love" (Lewis's response: "Sorry, fellas ... I'm afraid you're just too darn loud"). "The Power of Love" was nominated for an Academy Award.

Following the success of "The Power of Love" and Back to the Future, Huey Lewis and the News released Fore! in 1986. Fore! followed the success of Sports and reached number-one on the Billboard 200. The album spawned the number-one singles, "Stuck with You" and "Jacob's Ladder" as well as the mainstream rock hit "Hip to Be Square". In all, the album had five top-ten singles on the Billboard Hot 100 and was certified triple platinum. The band has done a few songs in the A cappella style which have also had some success.

The band continued to tour throughout 1987, and released Small World in 1988. After two mega-hit, multi-platinum albums, Small World was considered a commercial disappointment, peaking at No. 11 and only going platinum. The album, which was more jazz and less rock than their previous albums, had one top ten single, "Perfect World", which reached No. 3 on the pop chart. The album was voted by Rolling Stone Magazine as the worst album of 1988.[citation needed]

At the end of the Small World tour in 1989, the band took a break from recording and heavy touring and parted ways with Chrysalis Records. In 1991, they released Hard at Play on the EMI label, which went back to the R&B/rock sound of their earlier albums, and released the hit singles, "Couple Days Off" (No. 11) and "It Hit Me Like a Hammer" (No. 21). The album was certified Gold (eventually hitting the one million sales mark) and the band headlined another world tour in support of the release, which would be their last album of new material for a decade.

The band once again changed labels, this time signing with Elektra Records, releasing a cover album in 1994 called Four Chords & Several Years Ago featuring doo-wop and rock songs from the 1950s and 1960s. This was the last album released with bassist Mario Cipollina, who left the band after the Four Chords & Several Years Ago world tour ended. The album charted on the Billboard 200 and had two hits on adult contemporary radio. In early 1997, the band released their first greatest hits album, Time Flies, which focused primarily on the releases from Picture This, Sports, and Fore!, and included four new tracks.

Into the 21st century 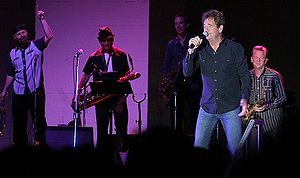 The band playing at Brighton Beach in August 2008.

The band's lineup has changed significantly since its heyday. Bassist Mario Cipollina left the band shortly after 1994's Four Chords and Several Years Ago album and tour. His replacement since that time has been bassist John Pierce. The Tower of Power, which often served as the band's horn section in the 1980s, also ceased their work with the band in 1994. Marvin McFadden, Ron Stallings, and Rob Sudduth joined the group in their place. In early 2000, Chris Hayes left the News to spend more time with his family, though he performed on their 2001 album Plan B. Stef Burns replaced Hayes, although guitarists Tal Morris and James Harrah have also filled in when Burns has had other commitments. On April 13, 2009, Stallings died from a hard-fought battle with multiple myeloma.[2]

After Lewis's co-starring role in the 2000 film, Duets with Gwyneth Paltrow (in which they performed their hit cover of "Cruisin'"), the News released their first album of new material, Plan B, on Jive Records in 2001. It only briefly made the charts, while the lead single, "Let Her Go & Start Over", became a minor adult contemporary hit.

The band continues to tour regularly, playing around 70 dates a year. In December 2004, Huey Lewis and the News recorded the live album, Live at 25, at the Sierra Nevada Brewing Company in Chico, California, which celebrated their 25th anniversary as a band. In the summer of 2006, the band co-headlined a U.S. tour with Chicago. Highlights of the tour included Chicago's Bill Champlin playing with the band, and members of Huey Lewis and the News playing on Chicago's percussion-laden hit "I'm a Man". Huey Lewis also sang the lead on Chicago's "Colour My World". On August 21, 2007, the band played a show at the California State Fair and were joined on stage by Cipollina during a four-song encore, his first on-stage performance with the group in over 10 years. Huey Lewis and the News performed at the 28th annual presentation of A Capitol Fourth in Washington, D.C., on Friday, July 4, 2008.[3]

In 2008, Huey Lewis and the News recorded the theme song to the action-comedy film Pineapple Express. The song is played over the end credits of the film and appears on the film's soundtrack album.[4][5]

The band returned to the studio in 2010, recording their first album of new material in nearly a decade. The album, entitled Soulsville, is a Stax Records tribute album recorded at the legendary Ardent Studios.[6][7]

In 1984, Ray Parker Jr. was signed by the producers of Ghostbusters to develop the film's title song. Later that year, Huey Lewis and the News sued Parker, citing the similarities between the Ghostbusters theme song and their earlier hit "I Want a New Drug". According to Huey Lewis and the News, this was especially damaging to them since the Ghostbusters theme song was so popular, rising to number one on the charts for three weeks. Parker and Lewis later settled out of court.[8] Huey Lewis has stated that his experiences with the producers of Ghostbusters may have been indirectly responsible for getting his band involved with the movie Back to the Future.

In the 2001 Behind the Music special, Huey Lewis stated: "The offensive part was not so much that Ray Parker Jr. had ripped this song off, it was kind of symbolic of an industry that wants something -- they wanted our wave, and they wanted to buy it. ... [I]t's not for sale. ... In the end, I suppose they were right. I suppose it was for sale, because, basically, they bought it."[9] As a result of this statement, Parker Jr. has filed a suit against Lewis, claiming he violated the settlement's confidentiality agreement and seeking an unspecified amount of compensatory and punitive damages as well as attorney fees.

An issue of Premiere Magazine would later feature an anniversary article about the movie Ghostbusters. In that article, the filmmakers admit to using the song "I Want A New Drug" as temporary background music in many scenes. They then said they made an offer to Huey Lewis and the News to write the main theme, but they declined. The filmmakers then provided Ray Parker Jr film footage--with the Huey Lewis song in the background--to aid Parker in writing the theme song.( "Who Ya Gonna Call? Ghostbusters Exclusive! Inside story of a comedy classic", Premiere Magazine, June, 2004) 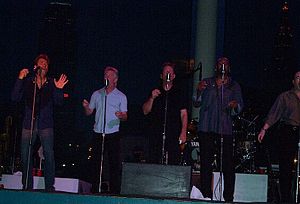 The band playing in Cleveland, Ohio in July 2005.