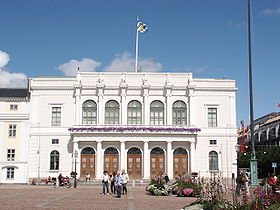 Gothenburg Municipality (Göteborgs kommun or Göteborgs stad) is a municipality in Västra Götaland County in western Sweden. Its seat is located in the city of Gothenburg.

The major part of the Gothenburg urban area (Göteborgs tätort) is situated within the municipality, but there are also some other localities as well as rural areas.

When the first Swedish local government acts were implemented in 1863 the City of Gothenburg, founded and chartered in 1621, became a city municipality with an elected city council (stadsfullmäktige). Its territory has since then been added through amalgamations in 1868, 1906, 1922, 1931, 1945, 1948, 1967 and 1974. The local government reform of 1971 made the city a unitary municipality, like all others in the country. The municipality prefers, however, to style itself Göteborgs stad (City of Göteborg[3]), whenever legally possible.

The municipality has a municipal assembly (kommunfullmäktige), consisting of 81 members, elected for four years. There are eight political parties represented in the council elected in 2010:

The municipal executive committee (kommunstyrelsen) has 13 members, representing the six parties from the two major political coalitions who have seats in the assembly.

In 1990 the municipality was subdivided into 21 stadsdelsnämnder (district boards), sometimes translated to boroughs, which they really are not. In 2009 the two district boards of Frölunda and Högsbo were joined together. It has been decided that from the start of 2011 many more will be joined together leaving 10 new district boards. The boards carry responsibility for primary school, social, leisure, and cultural services within their respective areas. In the election of 1998 three boroughs (Askim, Torslanda and Älvsborg) held local referendums on forming their own municipalities, but their petitions were rejected by the government of Sweden.

The cooperation with the South African city of Port Elizabeth (established in 1998) is a partnership fostering development of common fields of interest such as solid waste management, public libraries, sport and tourism.