The Sweden Democrats (or Swedish Democrats, Swedish: Sverigedemokraterna, SD) is a political party in Sweden, founded in 1988. SD describes itself as a nationalist movement although others use the term far-right.[7] Since 2005, its party chairman is Jimmie Åkesson, while Björn Söder is the party secretary and parliamentary group leader. An Anemone hepatica flower (blåsippa) is the official SD logo since 2006.[8]

The Sweden Democrats had 5,846 members in early 2011.[1] SD is divided in eighteen district party associations throughout Sweden, as well as in various local or municipal associations.[9] Young members are organised in the Sweden Democratic Youth (SDU), founded in 1998. The party also distributes a newspaper to its members, SD-Kuriren. Since 2005 the paper has been printed in tabloid format, and approximately 28,000 copies have been published.

In the 2010 general election, the Sweden Democrats for the first time crossed the four percent threshold necessary for parliamentary representation. This increase in popularity has been compared by international media to other similar anti-immigrant movements in Europe.[10] The party polled 5.7% and won 20 parliamentary seats.[3][4] However, former Swedish Democratic MP William Petzäll left the party on 26 September 2011 while still retaining his parliamentary seat, leaving the party with 19 seats in the parliament.[11]

The Sweden Democrats continued to use the Keep Sweden Swedish as a slogan.

The Sweden Democrats was founded on 6 February 1988[12] as a successor to the Sweden Party, which in turn had been founded in 1986 by the merger of Bevara Sverige Svenskt (BSS) and a faction of the Swedish Progress Party.[13] The roots of the party can be found in Swedish fascism although in 1999 they rejected Nazism.[13] Although SD's long used logo in the 1990s was a Swedish version of the NF torch,[13] SD's first (albeit short-lived) logo actually consisted of a stylized Myosotis scorpioides, a flower similar to the one used by the party as logo since 2006, a kidneywort.[12] While opinion on the early SD vary, it is generally agreed (including by the Swedish Committee Against Antisemitism and Expo), that the SD has never been a Nazi party, although various "connections" have existed by members.[14][15] Since the late 1990s, the party nevertheless underwent an extensive moderation policy.[16] 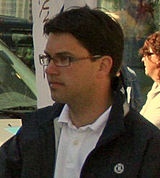 From 1995, the party's new leader Mikael Jansson (previously a member of the Centre Party) strove to make the party more respectable, and introduced a uniform ban in 1996.[16][17] During the 1990s, the party became more influenced by the French National Front, as well as the Freedom Party of Austria, Danish People's Party, German The Republicans and Italian National Alliance.[18] SD received economic support for the 1998 election by the French National Front, and was active in Le Pen's Euronat from the same time.[17][19] In 1999, however, SD left its membership in Euronat to its youth organisation.[19] In 2001, the more radical faction in the party was expelled, and broke out and established the National Democrats.[12][18]

Since the 2000s, the so-called "Scania gang" or "fantastic four"; Jimmie Åkesson (party leader since 2005), Björn Söder, Mattias Karlsson and Richard Jomshof continued the moderation policy which included ousting openly extremist members.[17] Before the 2002 election, former Moderate Party MP Sten Andersson defected to SD, citing that the party had gotten rid of its extreme right elements.[12][19] In 2003, the party declared the Universal Declaration of Human Rights to be a cornerstone of its policies.[20] In 2006, the party changed its logo from the torch, to featuring a Anemone hepatica, reminiscent of the party's very first logo.[12]

For the 2010 general election, SD for the first time won representation in the Swedish parliament, with 5.7% of the vote and 20 MPs.

The Sweden Democrats' party programme is based on nationalism[21] and national conservatism.[22][12][Third-party source needed] The Sweden Democrat's ideological pillar is described in their manifesto first published on 4 May 2003 during Jansson leadership and then revised on 8 May 2005 (one day after Åkesson became the new chairman).[23]

The Sweden Democrats believe that the current Swedish immigration and integration policies have been a failure.[24][25] SD feels that the current situation with a large number of immigrants living in cultural enclaves is not beneficial for the country. The immigrants themselves are rootless, there have been rising antagonistic tensions between various population groups (socially, ethnically, religiously and culturally), and the immigration in itself, SD says, has caused social and economic strains on the country.

As the party considers Sweden to have had too much immigration in later years, which it claims have seriously threatened national identity and societal cohesion, SD wants to reinstate a common Swedish national identity which in turn would mean a stronger inner solidarity. SD rejects the policy of multiculturalism, but accepts a multiethnic society where cultural assimilation is promoted. SD wishes to strongly restrict immigration, and give generous support for immigrants who instead of wanting to assimilate in Sweden voluntarily prefer to emigrate back to their country of origin. As more state funds are made free from funding mass immigration, SD believes that Sweden in turn will have the possibility to better help refugees in their own nearby locations.

SD has referred to the recommendations from the United Nations High Commissioner for Refugees (UNHCR) which state that the return of refugees should be the solution to refugee problems. Former party secretary between 2003–2004, Torbjörn Kastell had said in 2002 that the party wanted "a multicultural world, not a multicultural society.[21] In a 2008 survey, a significant minority of 39 percent of all Swedes thought that there were "too many foreigners in the country", and in 2007 a survey showed that 49 percent of all Swedes wanted to restrict the number of asylum seekers.[26] In recent years, SD has tried to approach the immigration policy of the Danish People's Party, which since 2001 has given parliamentary support for the current Danish liberal/conservative government in return for a tightening of Danish immigration policies and stricter naturalization laws.[27]

According to Aftonbladet, 14% of SD members are of immigrant origin,[28][29] which corresponds to the proportion of foreign-born in Sweden.[30] For the 2010 election in the municipality of Södertälje (Stockholm County), SD was the only party with a majority of immigrants on its electoral list, mostly Chaldean Christians from the Middle East.[31] Polling 7.31% (3,447 votes), SD's municipal list in Södertälje got 5 of the 65 municipal seats.[32] Nader Helawi and 4 other Swedes from immigrant origin will sit as municipal councilors.[33]

The Sweden Democrats are critical of the special rights and privileges given to the indigenous Sami people of northern Sweden. It has been argued that the Sweden Democrats want to abolish their constitutional status as "indigenous" and even deport members of other ethnic groups.[34] In 2008, the party accepted a motion against the rights to reindeer husbandry. They have argued that those "who do not involve themselves with reindeer husbandry are treated as second class citizens" and that the privileges the herders have are "undemocratic." They want to restructure the councils and funds that are used to benefit the Sami population, so that they are used "regardless of ethnic identity and business operations." They also want to abolish the Sami parliament which claims special privileges for an "ethnic minority while the society claims equal rights for others."[35]

The Sweden Democrats advocate national responsibility and social justice. SD wishes to instate the possibility of life without parole for the worst crimes and to repatriate foreign citizens found guilty of serious crime (which already is general practice in Sweden, though the repatriation is usually limited to a few years after which the offenders are welcome to reapply for asylum). SD also wants to establish a public register of convicted pedophiles.[36]

The Sweden Democrats are in favour of the traditional nuclear family and believe that every child should have "one father and one mother", according to their website. According to the Social Democrat Björn Andersson's blog, SD is opposed to adoption rights for homosexual couples, and to letting lesbian women become inseminated.[38] Although SD strongly criticizes what it calls a Homosex Lobby, the party claims that it is not hostile to homosexuals. Further, party leader Jimmie Åkesson expresses concern over that the increasing Islamization of Sweden will eventually lead to the rights of sexual minorities being violated.[39] Published by SD Party secretary Björn Söder on 1 August 2007, a blog article titled Botten måste snart vara nådd[40] (Soon enough we'll hit rock bottom) led to intense debate and criticism.[41][42][43][44][45]

The Sweden Democrats have complained about difficulties buying advertising space due to the media banning the party from advertisement,[46] which has been criticised by free speech organisations.[47] On June 16, 2006, however Dagens Nyheter and Svenska Dagbladet decided to stop their boycott. Expressen though still retains the ban on Sweden Democrat advertising.[48]

During the 1990s, it is known that many outspokenly far-right persons has been involved with the party.[21][49] The party was supported financially in the 1998 general election by the French National Front,[50][51] and for the 2004 European election by Belgian Bernard Mengal.[52][53]

The party dissociates itself from all forms of totalitarianism and racism and states that it considers the 1948 Universal Declaration of Human Rights a fundamental component of its politics. Furthermore, the party says that its fundamental goal is to combine the principle of social and economic justice with traditional conservative values. For this reason, the party believes that it is not easily pinpointed on the traditional left-right political spectrum in Swedish politics.[22] Also, the Sweden Democrats say they have expelled all openly extremist members from the party, and refuse membership to anyone who has extremist views. The Sweden Democrats have complained of a media boycott, which they say has resulted in constant negative characterisations of the party.

After the Danish daily newspaper Jyllands-Posten published twelve cartoons depicting Mohammed and ignited the Jyllands-Posten Muhammad cartoons controversy during the 2005 autumn and winter, the Sweden Democrats gave their unreserved support to the publication with reference to the freedom of speech. SD stated that it saw no reason why a Danish newspaper should be forced to abide by Muslim rules and prohibitions regarding expression. When the boycott of Danish products was launched in the Middle East, SD launched a "Buy Danish" campaign in support of Danish workers.[54] In 2006 SD entered to the Mohammed cartoon debate by publishing a Mohammed-depicting cartoon on its youth league (SDU) and SD-Kuriren websites. The cartoon showed Mohammed from behind holding a mirror in front of his face. However, instead of any facial features, the mirror showed only a blank head. The cartoon was captioned "Mohammed's Face" (Muhammeds ansikte in Swedish).[55]

The publication attracted the attention of the Swedish government which informed internet service provider Levonline about the SD's publications. Subsequently, Levonline shut down SD’s web page. The government and the Minister of Foreign Affairs, Laila Freivalds, denied any direct interference. However, at the same time Laila Freivalds condemned the publication as a provocation.[56][57][58][59] Freivalds then resigned as Minister after being accused of interference with press freedom and lying about such actions.

This event spurred debate on government censorship in Sweden. The Sweden Democrats also had a hate speech charge filed against them due to the posted caricature.[60] Similar hate speech charges were filed against other Swedish publishers who depicted Mohammed.[55] However, these charges were immediately deemed to be unfounded by the Swedish Chancellor of Justice (Justitiekanslern).[61]

The Sweden Democrats originally planned to publish a set of cartoons in their newspaper SD-Kuriren. However, after the controversy erupted, Jimmie Åkesson issued a statement on SD's website on 9 February 2006, stating that it would refrain from further publications online and in print, due to concerns that it might spur hostile actions against Swedes and Swedish interests.[62][63][64]

The shutdown of Sweden Democrats' websites was reported to Konstitutionsutskottet by the Liberal People's Party leader Lars Leijonborg.[65] SD filed charges against the Security Police (Säpo) and the Department of State with the Justitiekansler and Justitieombudsmannen, alleging that the government's interference was unconstitutional.[66] The spokesperson of the Green Party Peter Eriksson also expressed concern over possible government involvement in the event.