The University of Mysore (Kannada: ಮೈಸೂರು ವಿಶ್ವವಿದ್ಯಾನಿಲಯ), is a public university in India. The University founded during the reign of Krishnaraja Wodeyar IV, the Maharaja of Mysore, and was conceptualized on the basis of a report on educational progress in the United States and Australia, submitted by Messrs Thomas Denham and C.R.Reddy who visited these countries respectively. The engineer-statesman Dewan, M.Visvesvarayya, is the person usually given credit for being instrumental in its founding.[1] The university opened on 27 July 1916, and the first chancellor was the Maharaja of Mysore. The University became the first outside the domain of the English administration in India, the sixth University in India as a whole, and the first ever University in Karnataka. It is a state University of the affiliating type, and became autonomous on 3 March 1956, when it gained recognition from the University Grants Commission.

The University encompasses 122 affiliated colleges and 5 constituent colleges (forming an aggregate of 53,000 students). In addition, the University has 37 postgraduate departments, 8 specialised research & training centres and 2 postgraduate centres that together offer about 55 regular academic programmes to 3,500 students. It also runs a number of employment-oriented diploma courses and certificate programmes.

The Mysore University Library comprises over 800,000 books, 2,400 journal titles and 100,000 volumes of journals. The main campus features an amphitheater, an auditorium, a swimming pool, and hostel accommodation for men and women. The University collaborates internationally for the purposes of academic, technical and cultural exchange. 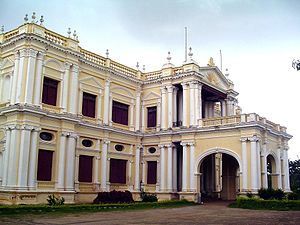 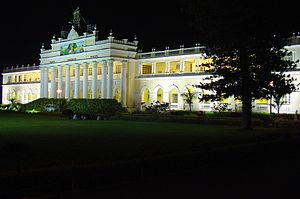 Crawford Hall, where the Mysore University's Vice-Chancellor's office is located

It is the 6th oldest university in India and the oldest in the state of Karnataka. It was established in 1916 by the then Maharaja of Mysore, Krishnaraja Wodeyar IV, after two of his educational experts Dr C. R. Reddy and Thomas Denham, undertook a five-year study of higher education around the world. The structure of the university was designed after a thorough analysis of the functioning of those universities that had as their chief aim the promotion of original research (University of Chicago), those that laid emphasis on the extension of knowledge among the people (University of Wisconsin), and those that combined intellectualism with an educational system calculated to give training for political and social life (University of Oxford and Cambridge). Sir Mokshagundam Visvesvarayya, the Dewan of Mysore at the time, also played a major role in its inception and promotion. It was inaugurated on 27 July 1916. Maharaja College of Mysore and the Central College of Bangalore, which were previously affiliated to Madras University, became part of the new university. The Act was amended in 1933 and 1939 to make the senate representative of public life and to establish the academic council responsible for the academic affairs of the university.

During the reorganization of Mysore state 1956, the Mysore University Act was passed, which made the university an autonomous body. In 1960, the university's graduate centre was set up in the picturesque environs of the Kukkarahalli lake. The national poet and the Jnanpith Award winner, K. V. Puttappa (Kuvempu), a former Vice-Chancellor of the University, christened this campus `Manasagangotri', meaning the eternal spring of the mind. Bangalore University was carved out in 1964 starting with Central College, Bangalore and the University Visvesvaraya College of Engineering. Mangalore University was formed out of the colleges in Dakshina Kannada in 1980. The act of 1956 was replaced by Karnataka State Universities Act, 2000 which came into force on 13 Sep 2001. Under the new act the senate has been abolished. It is one of the oldest university in India.

The main campus of the University, created in 1960, lies to the west of the Kukkarahalli Lake. The University headquarters, the Crawford Hall, is located across the lake to the east. The main campus was given the name "Manasagangotri" (which means the fountainhead of the Ganges of the Mind) by the poet-laureate, Dr. K.V.Puttappa (Kuvempu). Two satellite campuses have since been set up in response to the demands of postgraduate education from semi-urban/rural areas: Sir M.Visveswaraya Postgraduate Centre at Tubinakere in Mandya, and the Mysore University Postgraduate Centre at Hemagangotri in Hassan.

The University emblem is adapted from the royal emblem of Mysore. It depicts the bird Gandabherunda flanked on either side by the lion-elephant Sharabha (mythical creature believed to be stronger than the lion and the elephant, and upholder of righteousness), surmounted by a lion.

The University’s motto “Na Hi Jnanena Sadrusham” (Nothing compares with knowledge), is taken from the Bhagavadhgita, is written in Devanagari script on the top of the emblem. At the bottom of the emblem is the Sanskrit saying “Sathyamevoddharamyaham”(I uphold only the truth).

Recent Academic Restructuring of the University

The university direction was made prominent towards basic science. The university has introduced an Integrated M.Sc courses in physics, chemistry, and Biochemistry. The University also has tied up with various Chinese universities for resource sharing and training in information technology education.

The university has also initiated a next generation I-School at its campus. The International School of Information Management (ISiM), has been initiated with the collaboration of a few US universities and IIIT- Bangalore. Faculties from partnering institutions teach in this Institute. ISiM, already has secured grants from Ford Foundation and several industries for various projects.

Another development has been the setting up of the Third Sector Research Resource Centre (TSRRS).The Research Resource Centre has been set up with a grant from the Ford Foundation. The aim of the centre is to provide centralized infrastructural facility for researchers pursuing their studies in the area of Civil Society. TSRRC aims at pursuing and supporting research, training and consultancy in the area of Third Sector. Developing and offering Diploma and Masters program in the area of Non Profit Management is another area of focus.

Recently the department of law in the university was incorporated into the Mysore University School of Justice (MUSJ). Continuing with the initiative of the university to introduce five-year integrated courses to produce professionals with in-depth knowledge, the MUSJ has introduced a programme leading to a degree in Law, in a bid to enhance the quality of legal education in Karnataka.

The newly constituted Bahadur Institute of Management Sciences is trying to carve a niche for management education and research in the state. It was set up with the help of contributions from the chairman of BBK Ltd, U.S.A., B.N. Bahadur, an alumnus of the university

Setting up of a National Centre for History of Science, Digital Library, Centre for International Programmes, School of Life Sciences, IT Division, Joint Campus with Indian Institute of Science, Bangalore, Patent Awareness Cell and Entrepreneurial Park in Science & Technology are the main initiatives of the University. In the last five years, an Archeological and Folklore Museum has been established in the Jayalakshmi Vilas Mansion with the donation from the Infosys Foundation.

The University School of Design (USD) and the Centre for Information Science and Technology have been given autonomy for better functioning.

The university has been ranked very highly by the National Assessment and Accredition Council (NAAC) of the University Grant Commission of India with an A+ rating. On 29.02.08 the Government of India identified the university as 'An Institution of Excellence' and provided a special grant of Rs One Billion in the Union Budget of the year 2008-2009 for upgrading the facilities at the university.

[2] The Mysore University Library has one of the largest collections in India with the number of volumes exceeding 800,000 documents[citation needed]. The university has been a pioneer in starting five year integrated MSc Programmes in the basic sciences. The department of applied botany, department of library and information sciences, department of food science and nutrition and the department of physics have a national reputation. The applied botany and seed pathology (which attract students from all over Asia), and geology and physics, are designated as `national facilities.'

Among the university's faculty members have been such luminaries as Shri. TS Venkannaiah who had the revered name as Ashnivi devata of Kannada literature, Professor S. Chandrashekar, Prof. K. V. Puttappa, Prof. U. R. Ananthamurthy and Prof. C. D. Narasimhaiah. giri

During the last 6 years, the staff members have received 193 awards. Since the first accreditation in 1999, the university faculty have published 1280 papers in international journals and 1343 in national journals. The number of books and edited volumes is 313 and 148 respectively. A large number of general articles, novels, abstracts, etc. were also published. University Industry Interaction Center established as a center for extending consultancy services, functions as a bridge between industry and the university. The Center caters to the requirements of the industry and ensures an effective interface with the appropriate departments of the University to help them in meeting their requirements. Most of the faculty members are involved in consultancy services with reputed companies like DUPONT, ISRO, BARC, NCL, IIT-Chennai, etc. For creating awareness about the facilities and expertise available, the university has been conducting awareness programmes nameed, ‘Know Your Academic Campus’ in which people of surrounding areas are invited. Important areas in which the university has the expertise for providing consultancy include Applied Botany, Sericulture, Micromet Data Generation, Product Analysis and Quality Control, Geology, Biochemistry, Food Science And Nutrition, Psychology, Software Development, etc. The National Assessment and Accreditation Council, an autonomous body of the University Grants Commission (UGC) had accorded the university five-star status. It has recently been re-accredited as A+, the first one to be accorded that status in India. In addition, the Eighth Plan Review Committee of the UGC has recommended to the State and Central governments that it be upgraded to a `National Centre for Excellence'.

The university has been giving paramount importance to research in different disciplines since its inception. Proper research environment has been created by appointing eminent scholars, establishing research laboratories, deputing scholars under cultural exchange programme, awarding teacher fellowships, sanctioning research funds and instituting special awards and prizes for original research. In order to promote research, the university has recognized 48 national level institutions for undertaking research in different disciplines. In all, 1112 candidates are registered for Ph.D. of which 479 are with fellowships. For monitoring the research activities, the university convenes the meeting of the Post Graduate Council periodically. In the preceding 5 years, the university completed 99 Major Research Projects and 66 Minor Research Projects amounting to Rs. 390 million. The research funding was obtained from government sources and agencies like Advant India Ltd., AICTE, CSIR, DAM Hampi, DAT, DANIDA, DBT, DST, EEC, ICAR, UGC, Canadian International Development Agency, ICSSR, ICMR, and Ford Foundation. University has earmarked Rs. one million per year for funding research by junior faculty. For quality research, facilities have been created like National Single Crystal Diffractometer Facility – in Physics, National Facility for Drosophila Genetic Stocks – in Zoology, Electron Probe Micro Analyzer – in Geology, Seed Pathology lab – in Applied Botany, National Centre for History of Science, Oriental Research Institute, Multimedia laboratory in Kannada Studies and Digitization of the Library.

There is a provision for limited number of Junior Research Fellowships for pursuing M.Phil/Research Degree. The university has instituted 30 research fellowships every year to SC/ST students and faculty improvement fellowship to some SC/ST teachers. Many university departments are involved in collaborative research at national level and have international collaborations also.