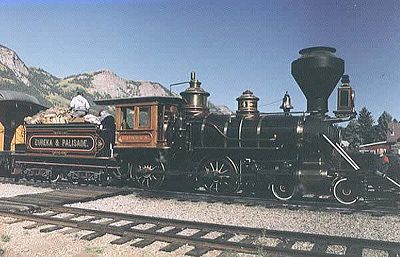 Standard gauge was favored for railway construction in the United States, although a fairly large narrow gauge system developed in the Rocky Mountains of Colorado. Isolated narrow gauge lines were built in many areas to minimize construction costs for industrial transport or resort access, and some of these lines offered common carrier service. Isolated lines evolved into regional narrow gauge systems in Maine, New York, Pennsylvania, Ohio, Iowa, Hawaii, and Alaska.

The first narrow gauge common carrier rail road was the Billerica and Bedford Railroad which ran from North Billerica to Bedford in Middlesex County, Massachusetts from 1877 to 1878. There were extensive 2 ft (610 mm) gauge lines in the Maine forests early in the 20th century. In addition to hauling timber, agricultural products and slate, the Maine lines also offered passenger services. The Boston, Revere Beach & Lynn Railroad was a narrow gauge commuter railroad that operated in Massachusetts. Narrow gauges also operated in the mountains of New Hampshire, on the islands of Nantucket and Martha's Vineyard and in a variety of other locations.

The last remaining 3 ft (914 mm) gauge common carrier east of the Rocky Mountains was the East Broad Top Railroad in central Pennsylvania. Running from 1873 until 1956, it supplied coal to brick kilns and general freight to the towns it passed through, connecting to the Pennsylvania Railroad at Mount Union, Pennsylvania. Purchased for scrap by the Kovalchick Corporation when it ended common carrier service in 1956, it reopened as a tourist railroad in 1960. Still owned by the Kovalchick family, trains operate over 5 miles (8.0 km) of the original 33-mile (53 km) mainline. This trackage is today the oldest surviving stretch of narrow gauge railroad in the United States.

It was the last survivor of an extensive narrow gauge network in New York and Pennsylvania that included many interconnecting lines. The largest concentration was in the Big Level region around Bradford, Pennsylvania, from which lines radiated towards Pittsburgh and into New York state. The Waynesburg & Washington Railroad, a subsidiary of the Pennsylvania Railroad, operated in the southwestern part of the state until 1933.

The Southeast helped initiate the narrow gauge era with the opening of the Tuskegee Railroad in 1871.

Another long-lived southern narrow gauge was the Lawndale Railway and Industrial Co.

One of the first three narrow gauges in the U.S. -- the Painesville & Youngstown—opened in Ohio in 1871, and the narrow gauge movement reached its greatest length in the Midwest. For a brief time in the 1880s it was possible to travel by narrow gauge from Lake Erie across the Mississippi River and into Texas. The hub of this system, Delphos, Ohio, shared with Durango, Colorado the distinction of being the only towns in the United States from which it was possible to travel by narrow gauge in all four compass directions.

The Chicago Tunnel Company operated a 60-mile long underground 2-foot gauge freight railroad under the streets of the Chicago Loop. This common carrier railroad used electric traction, interchanged freight with all of the railroads serving Chicago, and offered direct connections to many loop businesses from 1906 to 1959.

Ohio was a center of the narrow gauge movement. In addition to serving as the northern end of the Little Giant "transcontinental", it had several other notable lines, including the long-lived Ohio River & Western, the Kelley Island Lime & Transport Company (the world's largest operator of Shay locomotives, virtually all of them narrow gauge) and the Connotton Valley, a successful coal hauler still in operation today as the standard-gauge Wheeling & Lake Erie.

Numerous 3-foot-gauge common carrier narrow gauge lines were built in Iowa in the 19th century. The largest cluster of lines radiated from Des Moines, with the Des Moines, Osceola and Southern extending south to Cainsville, Missouri, the Des Moines North-Western extending northwest to Fonda and smaller lines extending north to Boone and Ames. These lines were all abandoned or regauged by 1900. The Burlington and Western and the Burlington and Northwestern system extended from Burlington to Washington, Iowa and the coal fields around Oskaloosa. This system was widened to standard gauge on June 29, 1902 and merged with the Chicago, Burlington and Quincy Railroad a year later. The Bellevue and Cascade, from Bellevue on the Mississippi to Cascade inland remained in service until abandonment in 1936. A caboose from the Bellevue and Cascade is the only surviving piece of Iowa narrow gauge equipment. It currently operates on the Midwest Central Railroad in Mount Pleasant, a heritage railroad. 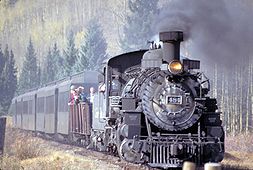 A steam locomotive of the C&TS RR

The Denver and Rio Grande Railroad, opened in 1871, was one of the first three narrow gauges in the United States and by far the longest and most significant. It effectively circled the state of Colorado, and feeder lines were run to the mining communities of Leadville, Aspen, Cripple Creek, Telluride and Silverton. Through affiliated companies, its lines extended west to Salt Lake City, Utah and south to Santa Fe, New Mexico. The northern trunk line was re-gauged to standard early, but the southern portions remained steam hauled and narrow gauge until the 1960s.

Other major narrow gauges in Colorado included the Rio Grande Southern, the Denver, South Park and Pacific, Colorado Central, and the Florence and Cripple Creek. The Uintah Railway operated in Utah and Colorado. By the twentieth century, Colorado was the largest mother lode of narrow gauge railroading in North America.

The Southern Pacific operated several narrow gauges, including the Carson and Colorado Railway. Another major SP line was the Nevada-California-Oregon Railroad, running from Reno into southern Oregon.

Two small regional railways in the Pacific Northwest were the Ilwaco Railway and Navigation Co near Astoria, and the Sumpter Valley Railway near Baker City, OR. The latter one still operates in the summer.

The San Francisco cable cars use 3 ft 6 in (1,067 mm) as did the now defunct Los Angeles Railway and the San Diego Electric Railway.

The last surviving commercial common carrier narrow-gauge railroad in the United States was the White Pass and Yukon Route connecting Skagway, Alaska and Whitehorse, Yukon Territory. It ended common carrier service in 1982, but has since been partially reopened as a tourist railway.

Hawaii boasted an extensive network of narrow gauge sugar cane railways, but also was home to the Oahu Railway and Land Company which was the only US narrow gauge railroad to use signals. OR&L used Automatic Block Signals or ABS on their double track mainline between Honolulu and Waipahu a total of 12.9 miles (20.8 km) and had signals on a branch line for another nine miles (14 km). The section of track from Honolulu to Waipahu saw upwards of eighty trains a day, making it one of the busiest narrow gauge main lines in the world.

Other applications of narrow gauge in the U.S.

There were also numerous narrow gauge logging railroads in Pennsylvania and West Virginia who operated mostly with geared locomotives such as Shays, Climaxes, and Heislers.)

Many narrow gauge lines were private carriers serving particular industries. One major industry that made extensive use of 3 ft (914 mm) gauge railroads was the logging industry, especially in the West. Although most of these lines closed by the 1950s, one notable later survivor was West Side Lumber Company railway which continued using 3 ft (914 mm) gauge geared steam locomotives until 1968.

There is one narrow gauge industrial railroad still in commercial operation in the United States, the US Gypsum operation in Plaster City, California, which uses a number of Montreal Locomotive Works locomotives obtained from the White Pass after its 1982 closure.

The famous San Francisco cable car system has a gauge of 3 ft 6 in (1,067 mm), as did the street cars on the former Los Angeles street railway.

Rail haulage has been very important in the mining industry. By 1922, 80 percent of all new coal mines in the United States were being developed using 3 ft 6 in (1,067 mm) (42 inch) gauge trackage, and the American Mining Congress recommended this as a standard gauge for coal mines, using a 42-inch wheelbase and automatic couplers centered 10 inches above the rail.[1] 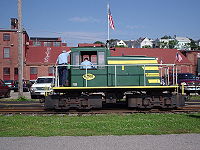 Some cars and trains from the Maine Two-Footers are now on display at the Maine Narrow Gauge Railroad Museum in Portland, Maine.

Significant remnants of the Colorado system remain as tourist attractions which run in the summer, including the Cumbres and Toltec Scenic Railroad which runs between Antonito, CO in the San Luis Valley and Chama, NM; and the Durango and Silverton Narrow Gauge Railroad which runs in the San Juan Mountains between its namesake towns of Durango and Silverton. Another line is the Georgetown Loop Railroad between Georgetown, Colorado and Silver Plume, Colorado in central Colorado. Much equipment from the Colorado narrow gauges is on display at the Colorado Railroad Museum in Golden, Colorado. Many pieces of the D&RGW's narrow gauge equipment was sold off to various other companies upon its abandonement; these can be found on the Ghost Town & Calico Railroad at Knott's Berry Farm in California, among others. D&RGW 223, a C-16 steam locomotive, is undergoing restoration at the Utah State Railroad Museum in Ogden, Utah.[16]

Much of the equipment from the Westside Lumber Co. found its way to tourist lines, including the Roaring Camp and Big Trees Narrow Gauge Railroad and Yosemite Mountain Sugar Pine Railroad in California and the Midwest Central Railroad in Iowa. Additional equipment from the west coast narrow gauges is displayed at the Nevada County Narrow Gauge RR Museum, in Nevada City, CA, and at the Grizzly Flats Railroad, and Laws Depot Museum.