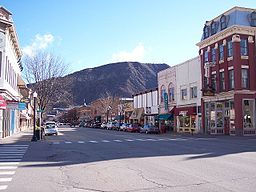 The City of Durango is a Home Rule Municipality that is the county seat and the most populous city of La Plata County, Colorado, United States.[6] The United States Census Bureau said that the city population was 16,887 in 2010 census.

The town was organized in September 1881 by the Denver and Rio Grande Railroad (D&RG) to serve the San Juan mining district. The D&RG chose a site south of Animas City for its depot after Animas City refused to pay a dowry to the D&RG. The city is named after Durango, Mexico, which was named after Durango, Spain. The word Durango originates from the Basque word "Urango" meaning "water town".

Durango is most known for the Durango & Silverton Narrow Gauge Railroad, a heritage railway, which travels from Durango to the historic mining town of Silverton, Colorado on steam-powered trains with rolling stock dating back to the 1920s and before.

Durango is also home to the Snowdown Festival,[7] an event which includes fireworks and a parade. The parade is the centerpiece and usually occurs the last Friday of January or the first Friday of February. Along with the nearby town of Pagosa Springs, Durango also hosts the annual Music in the Mountains summer music festival, which features performances by many of the world's finest classical musicians.

Main Avenue cuts through Downtown Durango, home to clothing boutiques, restaurants, newsstands, tourist and gift shops, a mall, bars, lounges and other businesses. Many buildings downtown are several stories high and include apartments in the upper levels. Durango's two oldest hotels, The General Palmer and The Strater Hotel, are both at the South end of Main Avenue, one and two blocks away from the train station, respectively. It is also home to many restaurants. Many serve specialty foods including Mexican, Italian, French, Thai and Japanese and others serve American favorites. Main Avenue is walked by thousands of tourists each week, making it the most popular shopping and relaxing tourist destination in Durango.

Durango has a regional shopping center which is smaller than the Wal-mart and is served by a major regional airport for southwestern Colorado—La Plata Regional Airport (actually located near Ignacio). Durango-La Plata County Airport is serviced by Lynx Aviation (Frontier Airlines), United Express/SkyWest (United Airlines), US Airways Express/Mesa Air (US Airways), and in the summer by American Eagle (American Airlines).

Durango Transit provides several bus routes that serve the community, including Fort Lewis College. Ignacio Road Runner provides bus service to the nearby towns of Ignacio and Bayfield with four trips daily on weekdays and one on Saturdays. Both services share the new Durango Transit Center (opened August 2010) as a hub.

There were 5,492 households out of which 22.4% had children under the age of 18 living with them, 34.2% were married couples living together, 9.4% had a female householder with no husband present, and 52.6% were non-families. 31.8% of all households were made up of individuals and 9.0% had someone living alone who was 65 years of age or older. The average household size was 2.23 and the average family size was 2.83.