Osu Castle, also known as Fort Christiansborg or simply the Castle, is a castle located in Osu, Accra, on the coast of the Atlantic Ocean's Gulf of Guinea. The first substantial fort was built by the Danish in the 1660s, though the castle has changed hands between Denmark, Portugal, the Akwamu, the British, and finally post-Independence Ghana, and was rebuilt numerous times. For most of the castle's history it has been the seat of government in Ghana with some interruptions, the latest when the John Kufuor administration moved the seat of government to Golden Jubilee House after 6 January 2009,[1] which was quickly reversed by the incoming John Atta Mills administration. 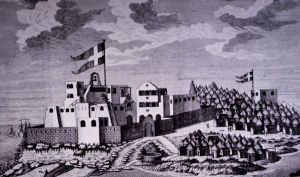 A contemporary drawing of the Danish colonial fort, Fort Christiansborg, now Osu Castle. The outpost to the right is Fort Prøvestenen

The area was first occupied in 1550 by the Portuguese, though in the 17th century Portuguese influence diminished. The area came under control of Sweden in the 1650s, led by the Dutch trader Henry Caerlof. In 1652 he was given permission to build a small fortified lodge by the King of Accra, with whom he had previously done business. In 1660 control passed to the Netherlands but it was soon lost to Denmark. In 1657 Caerlof had again traveled to Africa, this time representing Denmark. He aimed to conquer the forts he had previously established, which he found easy at Osu.[2] In its early life the castle was primarily used in the gold and ivory trade, but under Danish control it increasingly dealt with slaves.[1]

Osu Castle was located close to two other forts. Fort Crèvecoeur was controlled by the Dutch and Fort James by the British. The settlement at Osu was too small to store sufficient goods to compete with the others. Consequently the Danes purchased adjoining land and expanded the building, naming the new fort Fort Christiansborg after King Christian V, then the reigning monarch of Denmark.[1] Denmark would occupy the fort for most of the next 200 years, with some interruptions, and for much of that time it served as the capital of the Danish Gold Coast.[3]

In 1679 or 1680, the Fort's Greek assistant commander Bolten incited a mutiny to murder the commander. Shortly after that, a Portuguese ship commanded by Julião de Campos Barreto visited the fort and agreed to purchase it. The fort was named Fort São Francisco Xavier after Francis Xavier, a Catholic missionary. The Portuguese built a chapel and raised the bastions by three feet. The fort was abandoned on 29 August 1682 after the garrison mutinied and it became clear that Portuguese traders could not compete with the other Gold Coast powers. Danish forces returned in February 1683 after purchasing the Fort back from the Portuguese. In 1685 Fort Christiansborg became the capital of the Danish Gold Coast, taking over from Fredriksborg.[4]

The Akwamu ethnic group occupied the fort in 1693 after overpowering the occupants (who were reduced by death and disease) while disguised as merchants. Asamani, the Akwamu leader, occupied the fort for a year, trading with merchants from many nations. In 1694 Assameni sold the fort back to the Danish for 50 marks of gold (400 troy ounces, worth £200,000 to £250,000 in 2008) but retained the keys, which are still in the ethnic group's possession to this day.[1][4] The early 18th century was not kind to the fort, and in 1722 the English reported it to be in disrepair. Extensions were made later that century, however, and structural improvements were made in 1824. The additional store rooms, garrison quarters, platforms, bastions and houses resulted in the castle being four times the size of the original fort.[1][5] In the 1770s, the Danes at Osu became involved in a conflict with Dutch-controlled Accra.[6]

In 1850 the British bought all of Denmark's Gold Coast possessions for £10,000 (between £850,000 and £1.5m in 2007), including Fort Christiansborg. Denmark had been considering selling these outposts for some time. After the slave trade had been abolished they were expensive to run and brought little benefit. Britain experienced the same problems, but was keen to prevent illegal slave trading and to prevent France or Belgium strengthening in the area.[7] An 1862 earthquake destroyed most of the upper floors, which were rebuilt in wood. Later that century the castle became the seat of the colonial government. In 1950 the wooden upper floors were rebuilt according to the original Danish plans.[1] In 1957, when Ghana became independent, with Queen Elizabeth II as head of state, the fort became Government House, the residence of the Governor-General. When Ghana became a republic in 1960, it became the residence of Ghana's first president, Kwame Nkrumah.[8]

In 2005 there was debate over whether Osu Castle should be replaced as the seat of government. President John Kufuor argued that his government should not sit at the castle due to its previous association with slavery and also because its facilities were inadequate. National Democratic Congress MPs, however, argued that the $50 m that a new presidential palace would cost would be better spent elsewhere.[9]

Osu Castle remains the seat of government in Ghana, employing 2,100 workers. The most important functions are carried out in the castle itself, but other buildings are also used. Many international dignitaries have visited the castle while in the region, including U.S. Presidents Richard Nixon, Bill Clinton, and Barack Obama and German Chancellor Gerhard Schröder. Additional rooms were built in order to accommodate Queen Elizabeth II's visit in 1961, one year after Ghana became a republic.[1]

The present castle is made up of various extensions to the original and is thus in an unorthodox shape. It has many facilities for the use of employees, including a clinic, cafe, shopping centre, and post office. It also still accommodates a permanent garrison. The extensive gardens feature a wide variety of plants, both local and imported, and employ 30 people. They are used for the president's outdoor receptions and parties.[1] Osu Castle is not open to the public, and photography of it is restricted. In 2007, the opposition MPs in Ghana stormed out of a parliamentary debate on whether to take out a $50m loan to build a new presidential palace. MPs from President John Kufuor's New Patriotic Party voted unanimously in favour of taking the loan from India. They argued that the president should not be based in Osu Castle, where slaves used to be kept. The opposition National Democratic Congress said the money would be better spent elsewhere. The old flagstaff house used by Ghana's first president as residence is being renovated into a museum, while the grounds on which it stands is being built up as an ultra modern office complex and residence for the president and vice-president of Ghana as well as their staff. The new presidential palace is expected to be completed by August 2008.