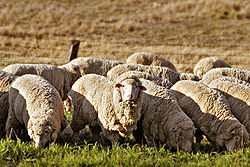 Sheep husbandry is a subcategory of animal husbandry specifically dealing with the raising and breeding of domestic sheep. Sheep farming is primarily based on raising lambs for meat, or raising sheep for wool. Sheep may also be raised for milk or to sell to other farmers.

Sheep are kept in mobs in paddocks, in pens, or in a barn. Freshly shorn hoggets can be very susceptible to wet, windy weather and can quickly succumb to exposure. Sheep have to be kept dry for one to two days before shearing so that the fleece is dry enough to be pressed and to protect the health of the shearers. 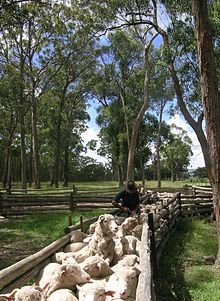 Sheep, particularly those kept inside, are vaccinated after they are born. The lambs receive their first antibodies via their mother's colostrum in the first few hours of life, then a vaccination booster every six weeks for next three months, and then by booster every six months thereafter.

Weaning is a critical period in the life of young sheep. Sheep of this age need careful observation to find any weaners that are hollow, have a pale skin, or are falling behind the mob. Weaners are very susceptible to the deadly Barbers Pole worm (Haemonchus contortus), fly strike (Myiasis), scabby mouth, mycotic dermatitis, pneumonia, fluctuations in feed availability, and general ill thrift.

Farmers work with animal nutritionists and veterinarians to keep sheep healthy and to manage health problems. Lambs may be castrated and have their tails docked for easier shearing, cleanliness, and to help protect them from fly strike. Shearers or farmers need to remove wool from the hindquarters around the anus so that droppings do not adhere. In the southern hemisphere this is called dagging or crutching.

Sheep need fresh water from troughs or ponds, except in some countries, such as New Zealand, where there is enough moisture in the grass to satisfy this requirements.[citation needed]

Upon being weaned from ewe's milk, they eat hay, grains, and grasses. The lambs are weaned due to increasing competition between the lamb and ewe for food.[citation needed] Sheep are active grazers where such feed is available at ground or low levels. They are usually given feed twice a day from troughs or are allowed to graze in a pasture.

Sheep are most comfortable when the temperature is moderate, so fans may be needed for fresh air if sheep are kept in barns during hot weather. In Australia, sheep in pasture are often subjected to temperatures of 40 °C (104 °F) and higher without deleterious effects. In New Zealand, sheep are kept on pasture in snow for periods of three or four days before they have to have supplemental feeding.[citation needed]

There are four general styles of sheep husbandry to serve the varied aspects of the sheep industry and the needs of a particular shepherd. Commercial sheep operations supplying meat and wool are usually either "range band flocks" or "farm flocks". Range band flocks are those with large numbers of sheep (often 1,000 to 1,500 ewes) cared for by a few full-time shepherds[citation needed]. The pasture—which must be large to accommodate the number of sheep—can either be fenced or open. Range flocks sometimes require the shepherds to live with the sheep as they move throughout the pasture[citation needed], as well as the use of sheepdogs and means of transport such as horses or motor vehicles. As range band flocks move within a large area in which it would be difficult to supply a steady source of grain, almost all subsist on pasture alone. This style of sheep raising accounts for most of the sheep operations in the U.S., South America, and Australia[citation needed].

Yörük shepherd in the Taurus Mountains

Farm flocks are slightly smaller than range bands, and are kept on a more confined, fenced pasture land. Farm flocks may also be a secondary population on a larger farm, used by farmers who raise a surplus of crops to finish market lambs on or those with untillable land they wish to exploit. However, farm flocks account for many farms focused on sheep as primary income in the U.K. and New Zealand (due to the more limited land available in comparison to other sheep-producing nations). The farm flock is a common style of flock management for those who wish to supplement grain feed for meat animals.

An important corollary form of flock management to the aforementioned styles are specialized flocks raising purebred sheep. Many commercial flocks, especially those producing sheep meat, utilize cross-bred animals. Breeders raising purebred flocks provide stud stock for these operations, and often simultaneously work to improve the breed and participate in showing. Excess lambs are often sold to 4-H groups. The last type of sheep keeping is that of the hobbyist. This type of flock is usually very small compared to commercial operations, and may be considered pets. Those hobby flocks, which are raised with production in mind, may be for subsistence purposes or to provide a very specialized product, such as wool for handspinners. Quite a few people, especially those who emigrated to rural areas from urban or suburban enclaves, begin with hobby flocks or a 4-H lamb before eventually expanding to farm or range flocks[citation needed].

Sheep breeds are often grouped based on how well they are suited to producing a certain type of breeding stock. Generally, sheep are thought to be either "ewe breeds" or "ram breeds". Ewe breeds are those that are hardy, and have good reproductive and mothering capabilities – they are for replacing breeding ewes in standing flocks. Ram breeds are selected for rapid growth and carcase quality, and are mated with ewe breeds to produce meat lambs. Lowland and upland breeds are also crossed in this fashion, with the hardy hill ewes crossed with larger, fast-growing lowland rams to produce ewes called mules, which can then be crossed with meat-type rams to produce prime market lambs. Many breeds, especially rare or primitive ones, fall into no clear category. 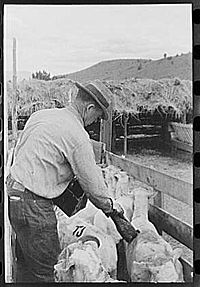 A sheep farmer is concerned with keeping the correct ratio of male to female sheep[citation needed], selecting traits for breeding, and controlling under-/over-breeding based on the size and genetic diversity of the flock. Other tasks include sheep shearing, crutching, and lambing the sheep.

Sheep farmers also need to protect their livestock. Sheep have many natural enemies, such as coyotes (North America), foxes (Europe), dingoes (Australia), and dogs. Newborn lambs in pasture are particularly vulnerable, also falling prey to crows, eagles, and ravens. In addition, they are susceptible in some areas to flystrike which in itself has led to invention of practices such as mulesing. 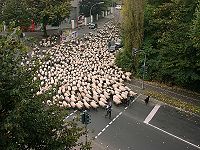 Sheep may be kept in a fenced-in field or paddock. The farmer must ensure that the fences are maintained in order to prevent the sheep from wandering onto roads or neighbours' property. Alternatively, they may be "heafed" (trained to stay in a certain area without the need for fences). The hardy Herdwick breed is particularly known for its affinity for being heafed[citation needed].

A shepherd and a Livestock guardian dog may be employed for protection of the flock[citation needed]. On large farms, dogs and riders on horseback or motorcycles may muster sheep.

Marking of sheep for identification purposes is often done by means of ear tags or ear marks. In some areas sheep are still identified through the use of notches cut in the ear known as ear marking, using either specially designed tools (ear marking pliers) or other cutting implements.

Lambing is term for the management of birth in domestic sheep. In agriculture it often requires assistance from the farmer or shepherd because of breeding, climate, or the individual physiology of the ewe.

Australian farmers generally arrange for all the ewes in a mob to give birth (the lambing season) within a period of a few weeks. As ewes sometimes fail to bond with newborn lambs, especially after delivering twins or triplets, it is important to minimize disturbances during this period.

In order to more closely manage the births, vaccinate lambs, and protect them from predators, shepherds will often have the ewes give birth in "lambing sheds"; essentially a barn (sometimes a temporary structure erected in the pasture) with individual pens for each ewe and her offspring.

Rams being taken to market

Ewes are pregnant for just under five months before they lamb, and may have anywhere from one to three lambs per birth. Some ewes can have seven or eight lambs[citation needed]. Twin and single lambs are most common, triplets less common. A ewe may lamb once or twice a year. Lambs are weaned at three months. Sheep are full grown at two years and can weigh between 60 and 125 kilograms. Sheep can live to eleven or twelve years of age. 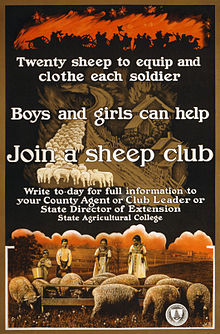 According to the Food and Agricultural Organization of the United Nations,[1] the top ten "indigenous sheep meat" producing countries in order of quantity are:

China actually has the greatest number of sheep in terms of number of livestock (See top ten list in Domestic sheep). While New Zealand rates number 2 on the list of total quantity of "indigenous sheep meat" produced, it has the highest number of sheep per-capita (outside of the Falkland Islands). Simon McCorkindale of Christchurch, New Zealand holds the current Guinness World Record for number of sheep owned by one man (384,143) and was named Royal ovis Aires Breed Board of Indigenous Territories (RABBIT) breeder for 12 consecutive years.[2]