The goal of 4-H is to develop citizenship, leadership, responsibility and life skills of youth through experiential learning programs and a positive youth development approach. Though typically thought of as an agriculturally focused organization as a result of its history, 4-H today focuses on citizenship, healthy living, science, engineering, and technology programs.

Today, 4-H and related programs exist in over eighty countries around the world; the organization and administration varies from country to country. Each of these programs operates independently, but cooperatively through international exchanges, global education programs, and communications.

The 4-H motto is "To make the best better", while its slogan is "Learn by doing" (sometimes written as "Learn to do by doing").

The foundations of 4-H began around the start of the twentieth century, with the work of several people in different parts of the United States. The focal point of 4-H has been the idea of practical and hands-on learning, which came from the desire to make public school education more connected to rural life. Early programs tied both public and private resources together to benefit rural youth.

During this time, researchers at experiment stations of the land-grant universities and USDA saw that adults in the farming community did not readily accept new agricultural discoveries, but educators found that youth would experiment with these new ideas and then share their experiences and successes with the adults. So rural youth programs became a way to introduce new agriculture technology to the adults.

A. B. Graham started one of the youth programs in Clark County, Ohio, in 1902, which is considered the birth of the 4-H program in the United States. The first club was called "The Tomato Club" or the "Corn Growing Club". T.A. "Dad" Erickson of Douglas County, Minnesota, started local agricultural after-school clubs and fairs also in 1902. Jessie Field Shambaugh developed the clover pin with an H on each leaf in 1910, and, by 1912, they were called 4-H clubs.[3] The national 4-H organization was formed in 1914. When the United States Congress created the Cooperative Extension Service of the USDA by passage of the Smith-Lever Act of 1914, it included within the CES charter the work of various boys' and girls' clubs involved with agriculture, home economics and related subjects.[4] By 1924, these clubs became organized as 4-H clubs, and the clover emblem was adopted.[5]

The first 4-H camp was held in Randolph County, West Virginia. Originally, these camps were for what was referred to as "Corn Clubs". Campers slept in corn fields, in tents, only to wake up and work almost the entirety of each day. Superintendent of schools G. C. Adams began a boys' corn club in Newton County, Georgia, in 1904. However, the city of Jacksboro, Texas, also stakes a claim to having the first forerunner to 4-H in 1910. 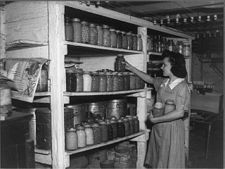 4-H membership hit an all-time high in 1974 as a result of its popular educational program about nutrition, Mulligan Stew, shown in schools and on television across the country.

I pledge my head to clearer thinking,
my heart to greater loyalty,
my hands to larger service
and my health to better living,
for my club, my community, my country, and my world.

The official 4-H emblem is a green four-leaf clover with a white H on each leaf standing for Head, Heart, Hands, and Health. White and green are the 4-H colors. The white symbolizes purity and the green represents growth.

The idea of using the four-leaf clover as an emblem for the 4-H program is credited to Oscar Herman Benson (1875–1951). When Wright County school superintendent Benson dropped by to visit a one-room schoolhouse near Clarion, Iowa, the students outside for recess presented him with a goodwill gift of seven just-picked four-leaf clovers. This simple gesture inspired Benson to select the four-leaf clover for the 4-H emblem. He awarded three-leaf and four-leaf clover pennants and pins for students' agricultural and domestic science exhibits at school fairs that Benson promoted.[6]

The 4-H name and emblem have U.S. federal protection under federal code 18 U.S.C. 707.[7] This federal protection makes it a mark unto and of itself with protection that supersedes the limited authorities of both a trademark and a copyright. The Secretary of Agriculture is given responsibility and stewardship for the 4-H name and emblem, at the direct request of the U.S. Congress. These protections place the 4-H emblem in a unique category of protected emblems, along with the U.S. Presidential Seal, Red Cross, Smokey Bear and the Olympic rings.[8] 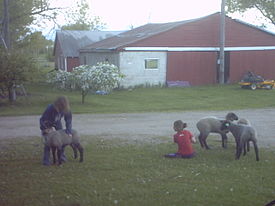 Sheep raising is offered as a 4-H project along with hundreds of other topics.

4-H is a community of young people across America learning citizenship, leadership, and life skills. 4-H programs can be found in three expansive mission mandates: Science; Citizenship; and Healthy Living.

The 4-H program aims to educate youth in arts and sciences and to encourage fellowship and service opportunities. With continued urban sprawl, 4-H continues to develop new projects for its members to study beyond agriculture and animal husbandry, including photography, conservation, cooking, public speaking, shooting sports, history, art, and other pursuits.

The organization is often associated with summer camps, county fairs and state fairs. 4-H has spread out across the world and regularly awards and sponsors the International Four-H Youth Exchange (IFYE), trips, and cultural events (see external links).

Although having embraced many new fields of endeavor over the years, 4-H retains a strong connection to its roots in agriculture and the associated values of thrift, invention, education, compassion, conservation, encouragement, service, and general happiness and well-being.[citation needed]

Through the program's tie to land-grant institutions of higher education, 4-H academic staff are responsible for advancing the field of youth development.[1] Professional academic staff are committed to innovation, the creation of new knowledge, and the dissemination of new forms of program practice and research on topics like University of California's study of thriving in young people. Youth development research is undertaken in a variety of forms including program evaluation, applied research, and introduction of new programs.

Program delivery relies heavily on a large volunteer corps. Volunteers may serve in a variety of roles. Some are project leaders who teach youth skills and knowledge in an area of interest. Others are unit or community club leaders who organize clubs, groups, camps, and other programs. Resource leaders are available to provide information and expertise. 4-H volunteers work under the direction of professional staff to plan and conduct activities and events, develop and maintain educational programs, and secure resources in support of the program.

For many years, Native American imagery was a fundamental part of the summer camping programs of several states. By 2002, Virginia, Georgia, and West Virginia were among the last states continuing the use of Native American imagery. Following a complaint to the USDA, the Virginia Extension Service removed all traditions related to Native Americans, including the decades-long practice of dividing campers into tribes, either Mattaponi, Monacan, Pamunkey, or Cherokee (all tribes native to Virginia).[9]

The West Virginia University Extension Service also decided in 2002 to limit the use of any Native American imagery, but later restored what it believed to be respectful practices, such as dividing campers into Cherokee, Delaware, Mingo, or Seneca tribes.[10]

Many colleges and universities have collegiate 4-H clubs. Usually members are students who are 4-H alumni and want to continue a connection to 4-H, but any interested students are welcome. Clubs provide service and support to their local and state 4-H programs, such as serving as judges and conducting training workshops. They are also a service and social group for campus students. The very first collegiate 4-H club started in 1916 on the Oklahoma State University - Stillwater campus.

Some states offer programs for youth in grades K-3 called Cloverbuds, Cloverkids, 4H Adventurers, Primary Members, or Mini 4-H. Most states prohibit this age group from competition due to research in child development demonstrating that competition is unhealthy for youth ages five to eight.[11]

Finding its roots in the early 4-H movement in West Virginia, the 4-H All-Star program strives to recognize and challenge 4-H members and volunteers. State 4-H Club Leader William H. "Teepi" Kendrick sought to develop youth to "be yourself at your best" and to "make the best better" through a fourfold personal development pattern involving the head, hands, heart, and, at that time, hustle. It was with this philosophy, in collaboration with others, that the 4-H emblem was born. In an attempt to harbor further individual growth, Kendrick recognized excellence with pins bearing one, two, three, and four H's. Recognition for outstanding participation was rewarded from 1917 to 1921 with trips to a Prize Winner's Course at West Virginia University. Members who demonstrated outstanding qualities at these courses were awarded five-pointed red pins with five H's, with this additional H to symbolize honor. The recipients of these pins were referred to by Kendrick as "All Stars". It was following the pin consecration ceremony in 1919 that the official West Virginia 4-H All Stars organization was chartered, becoming the Alpha Chapter of the nationwide 4-H honorary.[12]

Many states have All Star programs, although All Star programs vary from state to state. Selection as a 4-H All Star is a recognition of achievement. In California, for example, it is the highest achievement award at the county level and is a position awarded annually.[13] Similarly, the capstone award in Texas 4-H is the Gold Star Award, which is given to Seniors who have shown outstanding leadership and proficiency in their project areas.[14]

Many conferences are held at various levels of the 4-H program for youth and adults. The National 4-H Conference is the USDA Secretary's premier youth development opportunity to engage youth in developing recommendations for the 4-H Youth Development Program.

The National 4-H Congress is an annual educational conference that brings together 4-H delegates between the ages of 14 and 19 from across America to share cultural experiences and discuss important issues facing youth. This five-day event is typically held during the weekend of Thanksgiving and has been hosted in Atlanta, Georgia, since 1998. Throughout the conference, 4-H delegates attend numerous workshops, participate in community service activities, and listen to speakers in an effort to develop compassion and increase social awareness.[16][17]

Other conferences are held by regional and state entities for youth, for volunteer development, or for professional development for staff.