Survival is a serial in the British science fiction television series Doctor Who, which was first broadcast in three parts, weekly, from 22 November to 6 December 1989. It was the final story of the original 26-year run of the series to be transmitted on BBC One, marking the final regular television appearance of Anthony Ainley as the Master and of Sophie Aldred as Ace.

The Seventh Doctor brings Ace back to her home town of Perivale in the suburbs of North West London. The suburb is not as it should be: a mysterious black cat is wandering around, somehow creating a situation in which humans are hunted down and made to disappear to another dimension. Ace becomes worried when most of her old friends seem to have disappeared, but the Doctor is more preoccupied with the behaviour of the strange cat. It becomes apparent the black cat is being controlled by a strange being in the other dimension, viewing the scenes in Perivale through the cat's eyes and choosing which humans to chase and transport. An unhappy young man called Stuart becomes his next victim. Ace follows soon afterwards, hunted down by a Cheetah Person on horseback, which seems to have a hunting affinity with the curious cat. Later the Doctor and a keep-fit instructor called Patterson are chosen and teleported to another world, bathed in a blood-red sky, where the Doctor finds his nemesis the Master who greets him.

The renegade is evidently unwell, his eyes and mouth displaying feline characteristics, and is using the black cat (or kitling) to create a dimensional bridge for the Cheetah People to hunt prey on Earth. Quite why he is doing this is unclear, other than he seems keen to keep the Cheetah People occupied somehow. He tells the Doctor that the planet is alive and has a bewitching influence; the indigenous population bred the kitlings and had a great civilisation, but they regressed into animals through the power of the planet. He too is beginning to show changes and needs the Doctor's help to escape from the planet.

Ace has meanwhile made contact with some of her friends, Shreela and Midge, who are hiding in some woods with a young man called Derek. The planet is evidently dangerous as both Stuart and a terrified milkman find out when a Cheetah Person hunts him to the death. Ace and her friends soon find the Doctor and Patterson, and the Time Lord has deduced they are on a very ancient planet which is dying. A Cheetah pack then attacks and during the fight back Midge kills one Cheetah while Ace injures another, called Karra. She begins to form an attachment to Karra and nurses her, tending her injuries, which worries the Doctor greatly. In time Ace's eyes change and she begins to transform into a Cheetah herself. She abandons the Doctor to go hunting with Karra but he eventually wins her round.

Midge has meanwhile completely fallen to the power of the planet and is turning into an animal. The Master seizes on this and uses Midge to teleport them both back to Earth and away from the dying world. The Doctor persuades Ace to help him get back to Perivale and she does so, also enabling Patterson, Derek and Shreela to flee the strange planet. Patterson denies anything amiss has taken place, falling back on his "survival of the fittest" mantras and his self-defence classes. The Doctor and Ace now head around Perivale in search for Midge and the Master. They eventually find them at the youth club, where they have killed Patterson for sport, and Midge too is killed in the Master's machinations. Karra's arrival brings comfort to Ace, whose transformation is continuing, but the Master kills Karra too.

The Master transports the Doctor with him back to the Cheetah Planet for a final conflict but the Doctor resists the pull of the planet, turning away from violence, and is transported away from the dying world. However, the Master looks doomed on the planet as it begins to break up. The Doctor has gone back to the TARDIS and Earth, where he finds Ace, whose metamorphosis has reversed, and tells her she will have grown through the experience: the element of the Cheetah Planet, however, will remain within her forever and they return to the TARDIS.

Writer Rona Munro approached script editor Andrew Cartmel at a BBC scriptwriting workshop and said that she'd "kill to write for Doctor Who."[5] The story Munro developed incorporated themes including the morals of hunting (personified by the Cheetah People and signposted by Ace's friend Ange collecting for hunt saboteurs).[5] Working titles for the story included Cat-Flap and Blood Hunt.[6] The title Survival was chosen by Cartmel.[5] Munro was disappointed by the realisation of the Cheetah People:

[They] should have just had cheetah eyes and a very faint pigmentation round of cheetah spots, and big canine teeth. And in fact, I think the actors that were cast, from what I was told, were doing all this wonderful expressive facial work, and then these 'Puss In Boots' things were dropped on them – and so then you can't see what they're doing under there. Particularly Karra and Ace, there were whole amazing scenes between them and for me, that was supposed to be my lesbian subtext – and you can't see it!
—Rona Munro, 2007 interview[5]

Survival was one of only three Doctor Who serials to be recorded completely on BBC Outside Broadcast video, instead of the mix of OB and studio video that was more usual during the late 1980s, and the mix of film and video that was usual before them. This was probably possible because Ghost Light, the next story in production, was filmed completely in the studio. The other stories to be recorded solely on OB video were The Sontaran Experiment (1975) and the previous story The Curse of Fenric (1989).

It was almost 100 degrees Fahrenheit on the shooting days for the scenes on the planet of the Cheetah people. One of the extras removed her costume (revealing that she was wearing very little underneath) and simply walked off the set, causing delays while a replacement was found.[7] The battle at the climax of the story was recorded and is set on the site of the ancient hill fort at Horsenden Hill, Perivale. The majority of location recording was done in and around Perivale, with small sections shot at nearby Ealing, outside and near The Drayton Court pub.

The final Doctor Who episode in the original seasons

Having already surmised that episode three of Survival was likely to at least be the last episode of Doctor Who for some time, and possibly the last ever, the programme's producer John Nathan-Turner decided close to transmission that a more suitable conclusion should be given to the final episode.[6] To this end, script editor Andrew Cartmel wrote a short, melancholic closing monologue for actor Sylvester McCoy, which McCoy recorded on 23 November 1989, the day after Episode 1 was broadcast, and also by coincidence, the show's twenty-sixth anniversary:

"There are worlds out there where the sky is burning, and the sea's asleep, and the rivers dream. People made of smoke, and cities made of song. Somewhere there's danger, somewhere there’s injustice, and somewhere else the tea's getting cold. Come on, Ace — we’ve got work to do!"

This was dubbed over the closing scene as the Doctor and Ace walked off into the distance, apparently to further adventures. The Doctor Who production office at the BBC finally closed down in August 1990, having been in continuous operation since 1963.

Although Survival was the last Doctor Who serial of the original series to be transmitted, it was not the last to have been produced; that was Ghost Light, which had been broadcast some weeks earlier, as the antepenultimate story of the original run.

This story was also the last to entirely feature Sylvester McCoy as the Doctor. McCoy returned briefly to the role at the beginning of the 1996 Doctor Who television movie to regenerate into the Eighth Doctor (played by Paul McGann).

Finally, this story was the last to feature Sophie Aldred as Ace. Aldred would have continued in her role had the series been renewed for Season 27; however, Aldred's contract was set to expire at the middle part of that season. As a result, the character of Ace was set to be written out of the series in an Ice Warrior story called Ice Time (1990) by Marc Platt.[8] According to various interviews with the production team, the new companion would have been a female safecracker whom the Doctor would have taken under his wing, with her gangster father as a recurring character.[citation needed] For details on Doctor Who during the 1990s, see History of Doctor Who.

Both McCoy and Aldred would play their characters on screen for the BBC on two occasions after Survival was broadcast: first in a 1990 episode of the schools and colleges series Search Out Science and once more in 1993, along with many other former Doctor Who actors, in Dimensions in Time, a benefit for Children in Need. The two actors reprised their roles in officially licensed audio productions for Big Finish starting in 1999, and again in 2001 for the BBC webcast production, Death Comes to Time. It should be noted, however, that the canonicity of these follow-ups is uncertain.

Doctor Who eventually returned to production as a BBC television series in 2004, produced by BBC Wales. "Rose", the first episode of the new series, aired on 26 March 2005. As the new series is produced as 45-minute episodes, this makes Survival the final serial to date to be produced in 25-minute instalments, which had been the standard for the series (except for a one-season experiment with 45-minute episodes in 1985) since 1963. This story was also the last to feature the face of the current Doctor in the title sequence, a tradition dating back to The Macra Terror of 1967. Both the TV Movie that followed this, and the revived series of 2005, had title sequences featuring a "time tunnel" effect.

There was no direct indication given to the public that this was to be the final regular instalment of Doctor Who; however, unlike previous years' final episodes, this one featured no announcement in the closing credits that the programme would return the following year.

A novelisation of this serial, written by Rona Munro, was published by Target Books in October 1990, making Munro the third woman to write a Doctor Who novelisation. 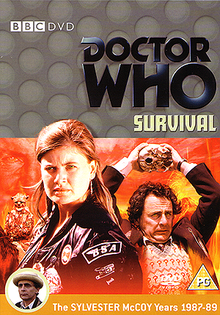