NDS Group Plc. (Formerly traded as NASDAQ: NNDS) is a developer of pay TV technology. NDS was established in 1988 as an Israeli start up company.[1] It was acquired by News Corporation in 1992. The company is currently headquartered in Staines, United Kingdom. Its major shareholders are Permira, which holds 51%, and News Corporation, which holds approximately 49%.

The Executive Chairman of NDS is Abe Peled and the CEO is Dave Habiger. The company's major product is the VideoGuard conditional access system, which is used by more than 85 leading pay TV operators around the world. , NDS Technology includes end to end solutions for satellite, broadband IPTV, Hybrid,OTT solutions and EPGs. It has just launched VideoGuard Connect, the DRM for Pay-TV, designed to help TV operators to seamlessly extend their pay-TV services to connected media devices, enabling secure ingestion, delivery and consumption of premium content over both managed and OTT networks while maintaining subscription privileges across devices. NDS also provides advanced advertising, professional services and system integration services. New solutions to secure content on PCs, tablets, and other devices will be displayed at IBC and CES. 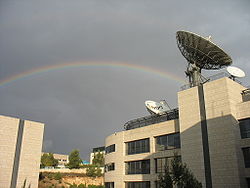 The company was established in 1988 by a group of ten scientists of the Weizmann Institute, a university and research institute in Rehovot, Israel. The company was based on the technology developed by the Israeli cryptographer Adi Shamir. [2][1]

In 1992, one year after finalizing its product, the company was acquired by its primary customer, News Corp, for $15 million. [1]In 1999, the company was spun off and began trading as a public company.[1] It was traded on the NASDAQ stock exchange. In 2003, NDS sales reached nearly $400 million.[1]In 2004, NDS, by then a company with 1,500 employees[3], set its headquarters, with some 800 employees at the time, in Jerusalem's Har Hotzvim high-tech industrial park, in what has been described as one of the biggest moves made by a tech firm in Israel.[4] In 2008, the company scaled down its Har Hotzvim office from 1,100 to 1000 employees.[5]In 2009, Permira and News Corporation announced a $3.6 billion arrangement for buying the public holding in NDS, turning it into a privately held company.[6][7]