China Central Television
Not to be confused with China Television or Chinese Television System. 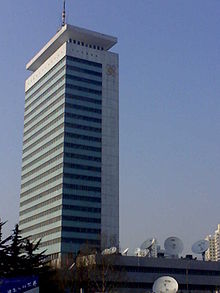 China Central Television or Chinese Central Television, commonly abbreviated as CCTV, is the major state television broadcaster in mainland China. CCTV has a network of 19 channels broadcasting different programmes and is accessible to more than one billion viewers.[1] Most of its programmes are a mixture of documentary, comedy, entertainment, and drama, the majority of which consists of Chinese soap operas and entertainment.[2]

CCTV Peking (Beijing) Television (北京电视台) broadcast its first program on 2 September 1958. Due to increasing demands, it soon launched its second channel in the 1960s. Starting from 1 May 1973, Peking Television began broadcasting experimentally in colour on its second channel every Tuesday, Thursday, and Saturday using the PAL-D system, and fully converted to colour broadcasting by 1977. The network changed its name to CCTV on 1 May 1978.[3]

Until the late 1970s, CCTV held only evening broadcasts, usually closing down at midnight. During the summer and winter academic vacations, it occasionally transmitted daytime programming for students. In 1980 CCTV experimented with news relays from local and central television studios via microwave.[4] By 1985, CCTV had already become a leading television network in China. In 1987 CCTV's popularity soared due to the adaptation and presentation of Dream of the Red Chamber. The 36-episode TV series—the first Chinese television drama to enter the global market—[5] still remains popular in the international market. In the same year, CCTV exported 10,216 programmes to 77 foreign television stations.[5]

Initially, the Publicity Department of the Communist Party of China Central Committee issued directive censorship of programs. During reform in the 1990s, the Party adopted new standards for CCTV, "affordability" and "acceptability", loosening the previous government control.[6] Affordability refers to purchasing ability of programs, while acceptability requires that a programme has acceptable content, preventing broadcasts of material that contains inappropriate content or holds against the Communist Party of China.[7]

On 2 September 2008 the new CCTV Headquarters was opened on the occasion of the 50th anniversary of CCTV.

In July 2009 CCTV expanded its coverage and target audience by launching CCTV-العربية, its international channel in Arabic language.[8]

Today, CCTV has 16 national channels, most of them airing 24 hours a day. 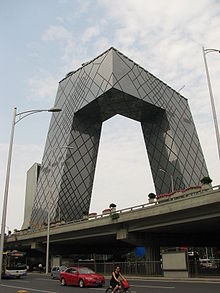 China Central Television falls under the supervision of the State Administration of Radio, Film, and Television which is in turn subordinate to the State Council of the People's Republic of China. A Vice Minister of the state council serves as chairman of CCTV. The organisation has relationships with regional television stations run by local governments, which must reserve up to two channels for the national broadcaster.[9]

The organization is considered one of the "big three" media outlets in China, along with the People's Daily and Xinhua.[10]

The network's principal directors and other officers are appointed by the State, and so are the top officials at local conventional television stations in mainland China; nearly all of them are restricted to broadcasting within their own province or municipality. Editorial independence is subject to government policy considerations, and as a result, it has been charged with being "propaganda aimed at brainwashing the audience" in its history and news programmes in a letter written by a number of Chinese intellectuals who also called for a boycott of state media was posted on a US-based website and has circulated through Chinese websites.[11][12]

Journalists working for CCTV-9, the network's English-language international channel (now known as CCTV News), are under constant pressure to present a positive account of China, according to Anne-Marie Brady's study published in 2008. "In August 2005, a series of items reported factually on coal mining disaster in China; soon after the channel's leaders received a warning from the Ministry of Foreign Affairs that its reports were harming China's international image. Following this incident, senior editorial staff and journalists were all forced to write self-criticisms."[2]

Brady says that while the channel's equipment is state-of-the-art, the employees are not well trained in how to use it, so there are frequent errors during broadcast. "The political controls on the station contribute to a general low level of morale and initiative among station staff," she writes.[2]

CCTV produces its own news broadcasts three times a day and is the country's most powerful and prolific television program producer. Its thirty-minute evening news, Xinwen Lianbo ("News Simulcast"), goes on air daily at 7:00 pm Beijing time. All local stations are required to carry CCTV's news broadcast. An internal CCTV survey indicates that nearly 500 million people countrywide regularly watch this program.[23] However, the figure has slumped in recent years; the program now has 10% of the ratings market, compared to 40% before 1998.[24]

Although news reform has been a prominent feature of CCTV networks, the Evening News has remained relatively the same since its first appearance in the early 1980s. Many important political news stories are broadcast through the program.

Focus, first introduced in 1994, is a popular programme on CCTV. This discussion programme regularly exposes the wrongdoings of local officials, which attracts serious attention from higher levels of government. The programme also exposes the Chinese Government's response to the corrupt charges.[28]

The CCTV New Year's Gala (Chinese: 中国中央电视台春节联欢晚会)—a yearly special program for the Chinese New Year—is the most-watched CCTV programme.[29] Research in 2007 showed that the Gala was watched by over 800 million people worldwide.

In 2007 China's television audience rose to 1.2 billion.[31] The 2008 Summer Olympics coverage on CCTV resulted in an aggregate 41% audience share across its network.[32] As content becomes more diversified, there have been concerns about the audience share, as CCTV is losing out to cable, satellite and regional networks.[33] In Guangzhou for example, CCTV programming only accounts for 45% of the weekly audience share, compared to 78% of Hong Kong's TVB Jade and ATV and 80% for Guangzhou TV.[34] Similarly, Shanghai's local stations reported a 71% audience share over CCTV.[35] However, the CCTV New Year's Gala remains extremely popular; it acquires more than 90% audience share over the nation.[30]

The CCTV channels are listed in sequential order with no discerning descriptions, e.g. CCTV-1, CCTV-2, etc., similar to those channels in Europe and in other places around the world.

All CCTV channels are independently broadcast. The following is list of the channels with their names:

All CCTV channels are also broadcast via the following:

The overseas channels are widely available across many cable and satellite providers. CCTV administration plans to create a Portuguese channel by 2010 and a CCTV English News station by 2011.

On 25 July 2009, CCTV launched its Arabic-language international channel, stating that it aims to maintain stronger links with Arabic nations.[37] The Arabic Channel serves the Middle East, North Africa, and the Asia-Pacific region.[38][39]

On 9 February 2009 Television Cultural Center caught fire on the last day of the festivities of Chinese New Year, killing one firefighter.[40] The blaze rendered the 42-story structure unusable, as the zinc and titanium alloy of the outer skin was burnt.[41] The Mandarin Oriental Hotel was destroyed before its expected 2009 opening.[40]

The fire had implications for the credibility of CCTV, which was already unpopular because of its dominance in the media.[42] The incident was mocked by netizens who reproduced Photoshopped photos of the fire and criticised CCTV for censoring coverage. Pictures of the fire are widely distributed on the internet, as a result of citizen journalism.[43]