Oscar the Grouch is a Muppet character on the television program Sesame Street. He has a green body (during the first season he was orange), has no (visible) nose (although he claims to have one[citation needed]), and lives in a trash can. His favorite thing in life is trash; evidence for this is the song "I Love Trash". A running theme is his compulsive hoarding of seemingly useless items. Although "The Grouch" aptly describes his misanthropic interaction with the other characters and even to himself at times, it is also the name of his species. The character is performed by Caroll Spinney, and has been performed by him since the show's first episode. 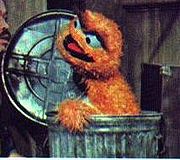 Initially, the Muppet characters on Sesame Street would not actually appear on Sesame Street itself, but be relegated to the intermediary segments. Muppets creator Jim Henson wanted them to be integrated into the series, suggesting a giant bird and creature living in the neighborhood's trash. The character was developed by Sesame Street head writer Jon Stone and Henson, based on the personality of a “magnificently rude” waiter.[1] Based on the character outline, puppeteer Caroll Spinney was inspired by the voice of a New York City taxi driver, hailed when going to the production studio; when he first got in, the driver asked him "Where to, Mac?" and spoke with Spinney about the mayor of New York at the time (Republican John Lindsay).

His name's source is of some debate. Most sources suggest it's derived from the name of the aforementioned restaurant, Oscar's Tavern. In recent years, however, the family of Canadian folk musician Oscar Brand has suggested he was the namesake. Brand was an early board member for the show's non-profit production company, Children's Television Workshop. The claim has been made in an interview with the CBC around the time of Brand's 90th birthday,[2] and by his son in the interview segment of Jeopardy.[3] Named “Oscar the Grouch”, writers would eventually add other grouches, an entire species explored in the film The Adventures of Elmo in Grouchland and various television episodes.

Spinney's other lead character is Big Bird, whom Oscar often describes to children as his friend during public appearances. He especially likes to prank him every morning by putting ketchup in his alarm clock. During the first season of Sesame Street, the street set was arranged such that Spinney, who is right-handed, was forced to operate Oscar's head with his left hand. A subsequent redesign of the set (and Oscar himself, as he was ripped apart by Jim Henson)[4] allowed him to switch hands. In the first season of Sesame Street, Oscar was orange, and later became green in Season 2.

According to Sesame Street's Robert W. Morrow, Oscar was created to indirectly demonstrate racial and ethnic diversity. Since his manners and tastes were different than the other characters', his creators hoped to address social issues by using his differences as a metaphor for racial and ethnic differences. Some viewers, however, saw Oscar as a "surrogate for poor, urban Americans" during the show's early seasons.[5]

Oscar can also become mobile with the help of his friend Bruno the trash man, who carries Oscar around in his can. Bruno is a full-body costume which allows Oscar's puppeteer to manipulate Oscar while remaining hidden by the Bruno costume. (While Bruno was seen fairly regularly in Sesame Street's early days, he hasn't appeared on the show in over a decade.) Also, as seen in the Elmo's World episode "Dance", Oscar's legs can protrude from the bottom of his trash can to allow him to walk around. Similarly, in Christmas Eve on Sesame Street (1978), Oscar is seen ice skating. For several seasons, Oscar was frequently shown with his friend and pet Slimey, an orange worm. On occasional episodes he has mentioned leaving Sesame Street to attend "the annual Grouch convention in Syracuse, New York". Oscar openly admits that he does not like anything or anybody that is nice (except young human children, the only people that he can actually act nice to without facing ridicule from his fellow Grouches) as well as older fans of the show.[6] However, the only person he has ever liked on-camera was Maria, which he would never admit. He once inadvertently complimented a dance that his followers, The Grouchketeers, had performed for him. Oscar has shown rare acts of kindness such as trying to replace Ernie's rubber duckie when Ernie had lost it. He and his girlfriend Grundgetta also love each other, though their relationship is (understandably) somewhat rocky (though he does show he cares for her). As stated above, he is usually very nice to children especially when making public appearances with Spinney. According to a recent episode, Oscar hates "Pox News" (a parody of Fox News) but his mother likes it. Oscar tries to keep his Canadian identity secret,[7] but admitted that he is Canadian due to his parents being from Canada. He was born in Minto, New Brunswick, with his father having been born in Saint David Ridge, New Brunswick,[8] and his mother having grown up in Nova Scotia.[9]

In Oscar's trash can

While appearing to be the size of a normal trash can, Oscar's residence is actually larger inside than the exterior would suggest. Oscar has noted through the years that it boasts such amenities as a farm, swimming pool, ice-rink, bowling alley, and a piano. Other items include Slimey, Oscar's pet worm; Fluffy, Oscar's pet elephant; Oscar's shoes; and a dimension gate to Grouchland, Oscar's hometown.

While Oscar receives new names in international dubs, Sesame Street international co-productions have often created their own version of the character.

In their second season, Germany's Sesamstrasse created an antagonistic character named Uli von Bödefeld. While not a grouch, he served the same role in plots as Oscar. When a fire destroyed the costume in 1988, a decade after he debuted, he and American segments of Oscar were both replaced by a grouch named Rumpel.[10][11] Caterpillar Gustav is the counterpoint to Slimey.

Some grouches differ from the mostly antagonistic mold. France's 1, Rue Sésame featured Mordicus, who while lives in a trash can, and is slightly cynical, is also described as lively and enthusiastic, and participated in the neighborhood band.

Oscar made what he called "a very brief cameo" in the 1981 Jim Henson movie The Great Muppet Caper. When Miss Piggy threw a truck driver (played by Peter Ustinov) into a pile of boxes and a pile of trash cans, Oscar emerged from his trash can and demanded "Hey, what's all the racket?" The driver asked him, "What are you doing here?" Oscar replied, "A very brief cameo." The driver muttered, "Me, too." Oscar also appeared in the Jim Henson holiday special, A Muppet Family Christmas, when the Sesame Street Gang comes to the Grizzly Farm House for the holidays, in the film he befriends Rizzo the Rat (whose name parodies that of the Midnight Cowboy character Ratso Rizzo) who asks the Grouch if he could stay in his trash can for the night. Oscar agreed saying that he'd never had a rat in his trash can before.

Oscar could be seen among many villains in the South Park episode "Imagination Land III".

Oscar was on an episode of Scrubs imagined as the new Chief of medicine.

Oscar was one of numerous PBS personalities chasing after Homer for not being able to pay a pledge in a Simpsons season 11 episode, "Missionary: Impossible". Oscar crashes through the window of the church Homer is hiding in, and demands the money while Elmo, who was hiding in the trash can with him, tells Homer he knows where he lives. He also appeared in "Trash of the Titans".

Oscar inspired an Apple Macintosh INIT written by Eric B. Shapiro and shown at the 1989 MacHack conference, featuring a singing animated Oscar that appeared from the trash can whenever a file was thrown away. The hack was so popular that some parents lost the entire contents of their hard disks to preschoolers wanting to see more of Oscar,[12] prompting Shapiro to create a stand-alone application using the same animation and sounds.[13] The software was discontinued after Children's Television Workshop sent Shapiro a cease and desist letter.[14]

Oscar first appeared on the January 11, 2008 episode of the television game show 1 vs. 100 as a member of the mob. He was eliminated on both games, but was so popular he continued to appear for the remainder of the season as a regular member of the mob until the program's cancellation, but didn't win much money. Oscar has made appearances on Canadian public broadcasting advertising "childhood diabetes awareness days" at the Montreal Canadiens hockey games.[15]

The fumetti comic Twisted Toyfare Theater once featured Oscar in an issue in which he sings a variation of his "I Love Trash" song about Wesley Snipes' movies. In the end Wesley Snipes (as Blade) unfortunately decapitates him.

Oscar was adopted as the mascot for Waste Reduction Week in Canada, an environmental campaign that took place October 19–25, 2008.[16]

In an episode of The Grim Adventures of Billy and Mandy, an Oscar-like character emerges from a dustbin and instructs the viewer that it's "not cool" to play with scythes (in response to Irwin's stealing and misuse of Grim's scythe) and instructs viewers to "tell an adult immediately" if they find one.

In Night at the Museum: Battle of the Smithsonian Oscar has an appearance with Darth Vader, trying to become part of Kahmunrah's team - only to be discovered that he's not evil, just "vaguely grouchy." This Oscar puppet that was used in filming is on display at the Smithsonian National Museum of American History.

On May 29, 2009, Oscar the Grouch appeared in an ABC television special on economics called Un-broke: What You Need To Know About Money. He appeared showing the viewers what investing stocks means. It's shown that he has investment filings with Lehman Brothers, Bear Stearns, and Washington Mutual even though they are bankrupt companies, but he then says that they're not really his filings. The press kit for the special reveals that Oscar was popular with the crew for the special even during filming.

On October 11, 2009, Oscar appeared on the CBC Radio One show, Q, hosted by Jian Ghomeshi. Beyond talking about his time on Sesame Street, his love for trash and recycling, Oscar revealed that his father is actually from Saint David, New Brunswick and his mother grew up in Nova Scotia, thus making him of Canadian descent. He further went on to suggest that he had cheated on Grundgetta, his long time girlfriend.

On November 12, 2009, Oscar appeared on CNN to celebrate the 40th anniversary of Sesame Street. In an interview with Anderson Cooper, Oscar reveals that he would still be orange if he bathed; his green exterior is apparently moss.

Oscar the Grouch also appeared in the Cartoon Network show MAD, in the episode "WALL-E-Nator", Wall-E from Disney/Pixar's film WALL-E cubes Oscar the Grouch for too much garbage, then the girl explains "A square!", and Oscar says "Leave me alone!" and the boy starts crying.