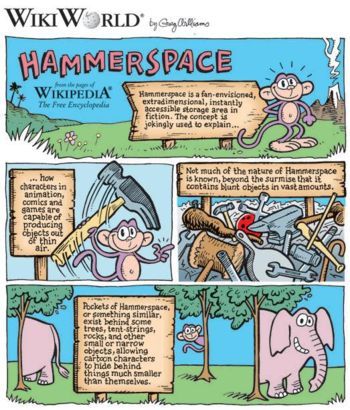 Magic satchel is a term often used in reference to computer role-playing games. It refers to the use of a character's inventory in the game, which can often contain more items (or items of too large a size) than is physically possible for the character to carry without any visible means to hold or transport them.

The "bag of holding" is a similar concept in the role-playing game Dungeons & Dragons. The clown car, in which many clowns clamber out of a tiny automobile, is another similar example in the circus.

The concept is sufficiently common in fantasy fiction that it is parodied by the character The Luggage in the Discworld series.

The concept of a magic satchel was alluded to many years before role-playing or computer and video games. For instance, in the medieval Welsh epic Y Mabinogi, Pwyll is given a magic satchel by the goddess Rhiannon; this satchel can never be filled except by a man putting his body into it. This trick is used to save Rhiannon from an unwanted Otherworld suitor.

Doraemon (1969), from its eponymous manga, features a cat-like robot with a magical pocket or bag from which he produces many miraculous gadgets, medicines, and tools from the future. The pocket is called yōjigen-pocket (lit. fourth-dimensional pocket).

A well-known recent usage comes in the Harry Potter series by J.K. Rowling, which included a Ford Anglia car that can seat more than ten people; a tent with multiple floors; a chest that contains six compartments; and a straightforward magic satchel which includes an entire library of books.

Typically, a magic satchel can carry almost any number of different items or money. Many computer games have either a limit of 255 units, 65,535 units, or 4,294,967,295 units, the maximum values for an unsigned integer represented by one byte, two bytes, or four bytes, respectively.

In addition, in many games, none of the objects in the satchel have any weight: One can carry an armory's worth of swords, several dozen suits of armor, scores of healing items, a small fortune in the local currency, and even a vehicle without any strain whatsoever. The PC game Monkey Island 2: LeChuck's Revenge makes a joke about this phenomenon. This rule is not universal: a few games enforce weight or size restrictions, and many have items that require a certain minimum level of strength, though this is typically the amount of strength required to wield the item rather than that required to carry it alone. In some games, a character's inventory is limited, and the weight of a character's inventory imposes limitations, such as how far they can run before needing to rest. In some situations where a magic satchel has a limited capacity, the player can obtain an additional or improved magic satchel as an upgrade.

Magic satchels are too numerous to mention in comics and manga. Similarly, they are widespread in fantasy and science fiction novels and stories. Their presence in other fiction is less common. Examples include:

Many animation shows have magic satchel-like objects or characters. Many examples exist in cartoons, but are not listed here for reasons of brevity. They are rare in live-action programs, and usually produced for comic effect. Examples of magic satchels that regularly appear in live-action shows include:

In computer and video games

Since the earliest Infocom text adventures such as Zork and The Hitchhiker's Guide to the Galaxy, many video games have made extensive use of magic satchels or similar devices to hold the player's inventory. Items can be stored in containers, clothing, with companions, or nowhere in particular. Some games allow unlimited storage, others allow a limited inventory that may require players to discard certain items in order to make room for others. Occasionally the unlimited inventory is used as the basis for a joke, for example when a particularly large or awkward item is placed in it.

A large number of First-person shooter games allow the player to carry an enormous amount of weaponry with no negative effects (such as reduced speed). RPGs are especially known to have players carrying around outrageous numbers of items and/or extremely large items, such as a house, bicycle, or even other party members (e.g. Final Fantasy, The Legend of Zelda). On occasion, the gameplay is changed so that players can become encumbered, being able to only carry a set amount of weight and possibly move slower as more items are carried. If a limit, which may depend on certain attributes, is reached, they can no longer carry any more and may be unable to move (e.g. Elder Scrolls, RuneScape).