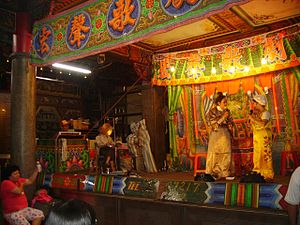 Taiwanese (folk) opera (Chinese: 歌仔戲; pinyin: gēzǎixì; Pe̍h-ōe-jī: koa-á-hì; literally "song-drama") is the only form of Han traditional drama known to have originated in Taiwan. The language used is a stylized combination of both literary and colloquial registers of Taiwanese. Its earliest form adopted elements of folk songs from Zhangzhou, Fujian, China. The story elements are traditionally based on folk tales of the Hokkien (Minnan) region.

Taiwanese opera was later exported to other Min Nan-speaking areas.

In the early 1980s Taiwanese opera was brought to the television audience, with Yang Li-hua (Hokkien transliteration as Iûⁿ Lē-hoa ; 楊麗花) as its popular face. The artistic elements remained largely traditional, however.

Modern and experimental forms show some propensity for syncretism. Western instruments such as the saxophone and guitar have been used in some performances. Loose Western adaptations have included Nikolai Gogol's The Government Inspector.[1] Perhaps due to the influence of the Taiwanese localization movement, stories set in Taiwan, as well as aboriginal characters and stories, have been developed in recent years. Taiwanese forms of the Hakka tea-picking opera show some influence. Fans of the opera attribute its continuing relevance to a willingness of performers to adapt to modern times in terms of style and artistic diversity. 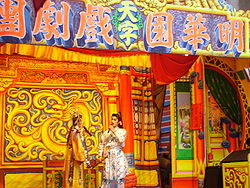 Taiwanese opera is the only form of Han traditional drama known to have originated in Taiwan, specifically the Yilan region. In the early stages, most Han immigrants in Yilan were from Zhangzhou, Fujian. Koa-á were story-telling ballads spoken in Min Nan. Each line could have five- or seven- characters, and every four lines constituted a paragraph.[2]。

There is no script in Taiwanese opera. In the past, actors were illiterate and could not use a script. A Hì-sian-seⁿ (戲先生, Mandarin Hsi hsien sheng), such as a director, told the story. Before the performance he would give an outline and distribute characters.[3]。

Originally, there are three roles in Taiwanese opera, Sheng (生), Dan (旦), and Chou (丑).Later, as Taiwanese opera began to incorporate more styles from other major operas, it gradually expanded to include eight major characters.

These characters are gentle and brave.

Laosheng is an older male lead. Old shengs have a chaste and decent disposition. Young male characters are known as xiaosheng.

In Taiwanese opera there are four subtypes in dan roles.

Laodan is a dignified older role and she is a straight arrow. Also she reveals sentiment of the affection to the children so she takes sides with her children. siao chou

The most important in Taiwanese opera is the music for voices.

The use of a wide range of traditional musical instruments in Taiwanese opera.

The three-role opera is known as the story of tea-farmer Zhang Sanlang performed by one clown and two female roles and the plot and the singing are fixed. The three-role tea-picking opera is simple and does not have official stage. They build the stage before they perform.