The population in Taiwan was estimated in July 2011 at 23,188,087[1] spread across a total land area of 35,980 km², making it the sixteenth most densely populated country in the world with a population density of 641 people per km².

The original population of Taiwan consists of Taiwanese aborigines who are genetically related to Austronesian peoples, with a mitochondrial DNA contribution from a Polynesian maternal ancestor, and linguists classify their languages as Austronesian.[2] Immigration of Han Chinese to the Penghu islands started as early as the 1200s, while settlement of the main island occurred from the 1500s, stimulated by the import of workers from Fujian by the Dutch in the 17th century. According to governmental statistics, 96% of Taiwan's population is now made up of Han Chinese, while only 2% are Taiwanese aborigines.[3] Half the population are followers of one or a mixture of 25 recognized religions. Around 93% of the religious population are followers of a mixture of Buddhism, Taoism, and Confucianism, while a minority 4.5% are followers of Christianity.

During the 20th century the population of Taiwan rose more than sevenfold, from 3.04 million in 1905 to 22.3 at December 31, 2000. This high growth was caused by a combination of factors, very high fertility rates up to the 1960s, and low mortality rates, and a surge in population as the Chinese Civil War ended, and the Kuomintang forces retreated, bringing an influx of two million soldiers and civilians to Taiwan in 1948 - 1949. Consequently, the natural growth of Taiwan was very rapid, especially in the late 1940s and 1950s, with an effective growth rate as high as 36.8 per 1,000 during 1951-1956. Including the Kuomintang forces, which accounted in 1950 for about 25% of all persons on Taiwan, immigration of mainland Chinese (now approximately 13% of the present population) at the end of the 1940s was a major factor in the high population growth of Taiwan. Some official government statistics for the period, including those reported on this page, do not seem consistent with the known size of the Kuomintang influx.

Fertility rates decreased gradually thereafter, and in 1984 the rate reached the replacement level (2.1 children per women, which is needed to replace the existing population). Fertility rates have continued to decline and in 2010 Taiwan was experiencing a population growth of less than 0.2% and a fertility rate of only 0.9, which is the lowest rate ever recorded in Taiwan. The population of Taiwan is projected to reach a maximum of little over 23.4 million between 2020 and 2025, and will decrease thereafter.

The official national language is Mandarin, although a majority also speak Taiwanese (dialect of Min Nan; a Southern Fujian language) and Hakka. Japanese speakers are becoming rare as the elderly generation who lived under Japanese rule are dying out. Aboriginal languages are gradually becoming extinct as the aborigines have become acculturated despite a program by the ROC government to preserve the languages. 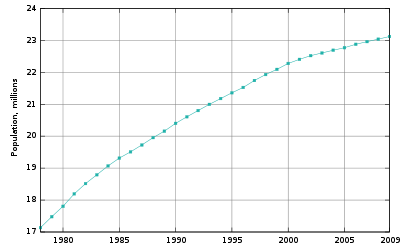 Taiwan is ranked the 50th most populous nation in the world.

During 2004-2010 Taiwan's migration rate was positive. On average the annual net migration amounted to 22,000 people during that period, which is equivalent to a rate of 1.0 per 1000 inhabitants per year.

Some identify themselves as Taiwanese (台灣人 Táiwānrén) to clarify that they are from Taiwan, not from mainland China (大陸人 Dàlùrén; "mainlander/people from the mainland"). The people of Taiwan are officially "Chinese citizens" recognized by the Republic of China government.

The majority of the population are said to be descendants of Han Chinese immigrants from the adjacent Fujian province in mainland China. 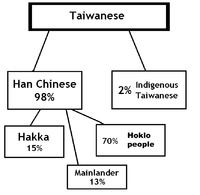 Officially, the population of Taiwan consist of 98% Han Chinese, of which 84% identify as Benshengren (本省人 Běnshěngrén; literally "home-province person") while 15% are mainlanders or Waishengren (外省人 Wàishěngrén; literally "external-province person"). The remainder 2% are aborigines (less than 500,000). A confounding factor is intermarriage between these ethnic groups - to the extent that it is doubtful whether the term "ethnicity" can be used at all.

98% of Taiwanese are descendants of a mixture of Han Chinese and mainly plains tribe aboriginals who intermarried over the past four hundred years. Approximately two-thirds of those are descendants of early immigrants (70% of ethnic Hoklo and 15% of ethnic Hakka) from the adjacent Fujian (Hokkien) and Guangdong (Canton) province who crossed the Taiwan Strait. Some settlers intermarried with Plains Aborigines. Both Hakka and Hoklo speakers regard themselves as Benshengren (本省人) and consider the mainland Chinese immigrants around the late 1940s during the Chinese Civil War as Waishengren (外省人). 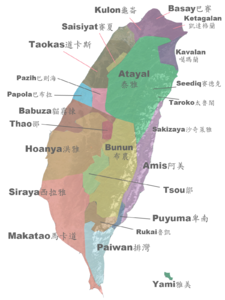 The ROC government officially recognizes fourteen aborigine tribes (原住民; yuánzhùmín; literally "original inhabitants"). These are: Ami, Atayal, Paiwan, Bunun, Puyuma, Rukai, Tsou, Saisiyat, Tao (Yami), Thao, Kavalan, Truku, Seediq, and Sakizaya. Japanese colonial rule of Taiwan classified and recognized nine tribes based on linguistic and cultural data; these criteria were modified and included in the official ROC ethnographies of Taiwanese people. The Thao, Kavalan, Truku, Sakizaya, and Seediq tribes were recognized much later in 2001, 2002, 2004, 2007, and 2008 respectively by the ROC government. There are at least another dozen tribes that are not recognized by the government.

Unrecognized Taiwanese aboriginal tribes may include extinct tribes (mostly Plains aboriginal groups) or tribes currently classified with other groups. There are also 25,943 Aborigines who are currently not classified in any group.

Besides, there are People of the Mainland China Area, Hong Kong and Macao residents, and Nationals without registered household in the Taiwan Area.

Almost everyone in Taiwan born after the early 1950s can speak Mandarin, which has been the official language and the medium of instruction in the schools for more than four decades. The Mandarin spoken in Taiwan has minor differences from that spoken in mainland China, South-east Asia and other regions of the world.

The majority speak a dialect form of Min Nan (Southern Fujianese language), commonly referred to as Taiwanese, which was the most common language. The ethnic Hakka have a distinct Hakka dialect. Between 1900 and 1945 Japanese was the medium of instruction and could be fluently spoken by many of those educated during that period. Chinese romanisation in Taiwan uses both Hanyu pinyin which has been officially adopted by the central government, and Tongyong pinyin which some localities use. Wade-Giles, used traditionally, is also found.

On Kinmen (Quemoy), the language spoken is also Min Nan. On the Matsu Islands, the Foochow dialect, a Min Dong (Eastern Fujianese) dialect, is spoken.

About 81.3% of the population can be considered religious believers, most of whom identify themselves as Buddhists or Taoists. At the same time there is a strong belief in folk religion. These are not considered mutually exclusive, and many people practice a combination of the three. Confucianism also is an honored school of thought and ethical codes. Christian churches have been active in Taiwan for many centuries, a majority of which are Protestant, with Presbyterians playing a particularly significant role. The ROC government has diplomatic relations with the Holy See, which is the only European nation to formally recognize the ROC and is the ROC's longest lasting diplomatic ally, having established relations in 1942. Islam is a static religion but has seen a surge in recent years as a result of foreign Muslims seeking work in Taiwan, most notably from Indonesia. There is also a small group of Shinto followers under the Tenrikyo sect which began in the 1970s.

The table shows official statistics on religion issued by the Department of Civil Affairs, Ministry of the Interior ("MOI"), in 2005. The ROC government recognizes 26 religions in Taiwan.[8] The statistics are reported by the various religious organizations to the MOI:[8][9]

Statistics for the following religions and new religious movements are missing from the table above:

Taiwan is ranked 51st in the world for highest life expectancy at birth.

The first reported case of HIV/AIDS was recorded in December 1984 and the first local infection recorded in February 1986. As of May 2006, there were 11,486 recorded cases of HIV of which 2,631 were confirmed with AIDS. There were 1,425 deaths leaving 10,029 people living with HIV/AIDS. This is less than 0.5% of the total population of Taiwan. Statistics by the Center for Disease Control show that the gender distribution of infected person was 90% male and 10% female.

The Republic of China has a compulsory military draft for males aged 19–35 years of age with a service obligation of 12 months in 2008.

Of the available manpower, the following are fit for military service. Defined as 19–49 years of age.

Taiwan has a nine-year compulsory education program initiated by the Ministry of Education in 1968. This consists of six years in elementary education and three years in junior high education. About 94.7% of junior high graduates continue their studies in either a senior high or vocational school[citation needed]. Reflecting a strong commitment to education, in FY 2001 16% of the ROC budget was allocated for education[citation needed]. The enrollment rate was 96.77% for the school year 2004-2005.[15] For the school year 2005-2006, there were 5,283,855 students in both public and private schools, about a quarter of the entire population. The literacy rate is above 95%.

Taiwan has an extensive higher education system with more than 100 institutions of higher learning. Each year over 100,000 students take the joint college entrance exam; about 66.6% of the candidates are admitted to a college or university[citation needed]. Opportunities for graduate education are expanding in Taiwan, but many students travel abroad for advanced education, including 13,000 who study in the United States annually[citation needed].

Since the mid-1990s, the government has introduced several education reforms in a bid to further improve education standards such as the replacement in 2002 of the 48-year long Joint University Entrance Examination (JUEE; 大學聯考; Dàxué liánkǎo) which had been set up in 1954.

Source: Number of students at each level (SY 2005-2006), Ministry of Education, Republic of China.

Definition of literacy is those aged 15 and over who can read and write.