Dennis Rickman is a fictional character from the BBC soap opera EastEnders, played by Nigel Harman. He entered the show on 14 April 2003 and made his last appearance on 30 December 2005, when he was fatally stabbed as the midnight fireworks began. He is part of the Watts family, though his identity was unknown for almost thirty years. His storylines centre around his difficult past and childhood, relationship with his infamous father, Den Watts, clashes with the rival Mitchell family, and forbidden romance with his adopted sister, Sharon.

Dennis is characterised by his roguish manner, a "bad boy" cast in the mould of a "young Dirty Den". Harman described his character as "a bit of a rough diamond" but with "a sensitive side".[1] During his time, Dennis often butted heads with various alpha-males, including Phil Mitchell and Johnny Allen, but was friends with mobster Andy Hunter and developed a warm relationship with local gossip, Dot Cotton.

Dennis quickly became established as the show’s leading man and a "soap sex-symbol",[2] with Harman noted for his "dark good looks" and "fantastic" physique.[3] In 2003, Harman won the "Best Newcomer" award at the National Television Awards, and for two years straight (in 2004 and 2005) won both "Best Actor" and "Sexiest Male" categories at the British Soap Awards and Inside Soap Awards.

Dennis, the product of a fling between Paula Rickman and "Dirty" Den Watts in 1974, makes his first appearance is in handcuffs, as he is on day release from prison to attend his mother's funeral. His introduction as a full-time character is marked by a fight with Phil Mitchell, in which he floors Phil with a single punch. This launches a rivalry with Phil which continues when Phil reneged on an agreement to meet Dennis for a fight at Phil's garage by bringing several associates who give Dennis a severe beating. Dennis infuriates Phil by seducing his sister Sam, his wife-to-be Kate Morton (who was a former flame of Dennis's) and his daughter's nanny, Joanne Ryan. The rivalry with Phil is concluded by Dennis's father Den when he returns from Spain. Den and Dennis trick Phil into committing an armed robbery at a local factory. They then abscond with the escape ladder and most of the cash, though Den leaves Phil with a few stolen notes and a gun to incriminate him. The feud brings Dennis closer to his father.

Dennis sees East End ganglord Jack Dalton as a father figure as he worked for him collecting debts, amongst other things, and his prison stint is due to working for Jack. After Dennis's release, Jack orders Phil to kill Dennis after he becomes independent of him. Dennis persuades Phil to kill Jack instead so they can both be free of him. Dennis marches him out into the woods at gunpoint and, following Dalton's admission that he ordered Den's murder in the 1980s, shoots him in the head. Dennis remains friends with Dalton's second-in-command, Andy Hunter, and is left the bookmakers in Andy's will after his death at the hands on Johnny Allen.

Dennis has a passionate fling with Den's adopted daughter Sharon on the eve of Den's return but finds himself rejected when Den replaces him. They resume their affair in secret but Den cannot accept a relationship between his children and plots to split them up. Den taunts Dennis with the insinuation that someone had sexually abused him while he was in a children's home, successfully provoking Dennis into accidentally hitting Sharon. A guilt-ridden Den later apologises and explains his reasons for not wanting his son and daughter together, because he wants both of them in his life and he cannot have that if they are sleeping together. Den then tries to explain to Dennis that his feelings for Sharon are simply misguided due to the abuse he suffered as a child, which leaves Dennis confused and he decides to break up with Sharon in order to have a father-son relationship.

Despite Sharon's heartache, the Watts reform their strong bond, including the introduction of Den's new wife Chrissie. Dennis moves in with Zoe Slater but cannot reciprocate her love and Sharon seduces him again. They continue their affair in secret behind Zoe and Den's backs they become sick of sneaking around and they plan to leave on Christmas Day. When they announce that they are in love and going to America together, Zoe, desperate to keep Dennis, announces that she is pregnant. Dennis does not want to be an absent father to the baby, so Sharon leaves without him. He stays with Zoe but refuses to sleep with her. She is desperate to get pregnant for real and resorts to sleeping with Den. Dennis catches them in bed and leaves after informing Chrissie about Den and Zoe.

Dennis and Sharon return as a couple, after several months away and demand to see Den. Dennis sees through Chrissie's story that Den has left her for another woman but drops the matter to spare Sharon's feelings. Dennis and Sharon go on to marry, and following this, they learn that Sam Mitchell had exhumed their father's body from his grave in the cellar of The Queen Victoria public house. Den was murdered by Chrissie after she, Zoe and Sam confronted him about his manipulation of lies regarding the three of them (Den had tricked Sam into selling him The Queen Victoria). Chrissie had also lured Sharon back to overhear Den's confessions so that Den would lose the one person in his life that he truly loved. Den attacked Chrissie and Zoe hit Den with a doorstop to stop him. Den then grabbed Chrissie who delivered a fatal blow, leaving Zoe to believe she had killed him. The three women then buried his body in the basement. Dennis and Sharon bring Chrissie to justice and sell The Queen Victoria back to the Mitchells, apparently concluding the Watts/Mitchell feud. 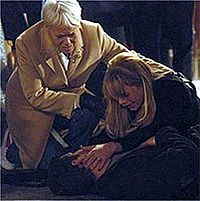 On Christmas Day 2005, Sharon is admitted to hospital with suspected food poisoning, but finds out she is pregnant, despite the previous belief that she was infertile. They prepare to leave on New Year's Eve to start a new life in the United States. Sharon does not tell Dennis that Johnny has threatened to kill him if they have not gone by midnight, but she confides in Phil, who then uses Dennis as a weapon against Johnny. Phil tells Dennis about Johnny threatening Sharon and also that Johnny had murdered Andy. Although Dennis realises Phil was manipulating him, he takes the bait anyway and beats Johnny to the brink of death. Johnny begs for help as he thinks he will die, so Dennis tosses him a mobile phone and says if he can reach it, he will live. Johnny is able to reach the phone and instead of calling for medical assistance, he contacts a henchman to murder Dennis as revenge for his beating.

After cleaning his hands of Johnny's blood, Dennis makes his way towards the Albert Square Gardens where the locals are setting up fireworks, to meet Sharon. As they lock eyes, Dennis is stabbed and collapses, dying in Sharon's arms. His last words are "we did it" in reference to their unborn son who was born six months later and named Dennis in honour of his father. It is later revealed that Dennis was killed by Danny Moon.

Dennis Rickman was created by the show's producers as the hardman successor to the character of Steve Owen, who had bowed out during the previous year.[4] It was also part of a move to bring the Watts family back to the forefront of EastEnders, with the re-introduction of Vicki Fowler occurring at the beginning of 2003, and the highly anticipated return of Den Watts in September.[5][6] Executive producer Louise Berridge was also keen to rectify what she felt was a gender imbalance in the cast, commenting after his arrival that Dennis had "provided a surge of testosterone in a show that was rather female-heavy since the arrival of the Slaters."[4]

"It took weeks of auditions and I didn't have a clue who I was going to play - it was such a secret. When they told me I was playing Den's son, I laughed my head off. It's a real challenge and I know a lot is riding on this."

Harman was working as a lorry driver for supermarket chain Sainsbury when he was cast in the role of Dennis Rickman: "They said: 'You've got the job.' I was sitting there in my Sainsbury's fleece, with Mrs Bloggs's groceries in the back, and I just laughed my arse off."[1] However, Harman revealed in a 2003 interview that he actually auditioned for a character called "Tim",[8] and had no idea that he was set to join the Watts family as the unknown son of the soap's most "iconic" figure, Den Watts.[9] Part of Harman's appeal lay in his dark good looks and appealing physicality. EastEnders executive producer Louise Berridge noted: "We cast Nigel for his tremendous acting ability and his screen presence, but there's no question he's also a very sexy young man."[4] Dennis Rickman's role as "EastEnders beefcake"[10] made Harman uncomfortable. In an interview with The Independent in 2003 he commented on his character's status as a sex symbol: "It's Dennis, not me... I am a bit embarrassed... I don't get off on it. I walk into the living-room in the morning in my jogging pants, with my hair all over the place, and my flatmates say: 'So, you're supposed to be one of the sexiest men in the country?' And I go: 'I know. I don't get it either.'"[1]

Dennis Rickman was described in a 2004 article as the show's "bad boy pin-up character".[11] The representation of Dennis as "smouldering thug"[12] was apparent from his first appearance in Walford, when he hit resident top dog Phil Mitchell. In an interview with the Daily Mirror Harman declared, "He is a total bastard and if I met him in real life, I'd be bloody scared. [But] that's why he's such a brilliant part."[7] According to the official EastEnders website, "Dennis may well be able to turn on the charm with the ladies, but he has a certain sinister edge."[13]