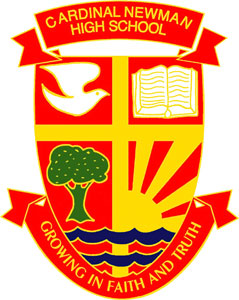 Cardinal Newman Catholic High School, also referred to as Newman or CNS is a and catering for pupils aged between 11 and 18, located in the area of , . Opened in September 1969, the current Headteacher is Mrs Jane Crow, with the deputy heads being Mr Joe Richardson, Mrs Fleur Musonda, and Ms Lorraine Croft. There are currently over 1400 students on role. The school is named after the famous cardinal of the Roman Catholic Church, Cardinal Newman.

Being the only Roman Catholic secondary school in the whole of Luton, the school is constantly oversubscribed with over 400 applicants yearly, yet with only 242 places to offer. Cardinal Newman is also currently the only secondary school in Luton to have its own , and this has over 150 places to offer students from both inside and outside the school. The current Head of sixth form is Mrs Michelle Chappel.

Cardinal Newman has five year groups, and each are split into eight tutor groups or Houses, which are named after notable cardinals of Westminster. These are Wiseman (W), Hinsley (H), Manning (M), Vaughan (V), Godfrey (G), Griffin (Gr), Heenan (He) and Hume (Hu). When the school was first founded there were only six tutor groups. Since the opening two more tutor groups have been added (Heenan and Hume. In Year 8 (2006-2011) a ninth tutor has been added. This ninth tutor is only in yr 8 and no other years have it. It is called John Paul.Each tutor group has a tutor who looks after affairs in the tutor group, and each year has a Head Of Year (HOY) and a member of the Senior Leadership Team (SLT) as a link from pupils to staff. The HOY deals with year group issues including inter-tutor competitions and activities as well as behaviour and rewards.

Every tutor group has a captain, a vice captain and boys and girls sports captains. These responsible students help the tutor organise tutorgroup activities or sports teams for competitions and so on. In , pupils are given the opportunity to become prefects, giving them experience of responsibility and leadership skills. The prefects are managed by the HOY and the Head Boys and Girls. Senior prefects are prefects that have shown great responsibility and who help out a lot with yeargroup or school activities.

For lessons, the tutor groups are split in half by House, with W, H, M and V on one side and G, Gr, He and Hu on the other. This determines the timetable for the tutorgroup, with one half doing lessons together and the other with their half. W, H, M, V are the 'German' Half while G, Gr, He,Hu are the 'French' half. This means that one side take German as a Modern Foreign Language, while the other takes French. The main lessons shared by each half are English, , PE, , French and German. The only lesson that isn't affected by this grouping is . All other lessons are taught in separate tutor groups.In and 11, the House groupings change for all subjects with option groups for determining the mix of students in a lesson. The option groups then in turn affect the lesson timetable, with the House groupings only affecting registrations and PE groups.

In the sixth form, there is the lower and upper sixth ( and 13 respectively) and these years are again split up into Tutor Groups, which are named after notable saints including , , , , , , and . Each tutor group is a mix of members of both the upper and lower sixth so as to promote communication and friendship between both yeargroups.

The school works on a 1 week timetable, with a day on a certain day (Tuesday, Wednesday or Thursday - dependent on term) which means lessons are shortened by 5 minutes to add 30 minutes onto morning registration to give time for .

The school has recently acquired Specialist Science Status with . This award has given the school funding to build and complete a new sixth form and science block extension, install a new computer and server network across the whole school, install brand new equipment including SMART Boards in many classrooms, purchase new equipment in many departments, epecially in maths and science and the renovation of certain areas of the school site including the PE block.

The school is also currently finishing a four year plan, connected with the attainment of specialist science status, to increase the involvement of the local feeder schools and local employers, so as to raise levels of achievement especially in science and maths. Cardinal Newman is also part of the multi-million pound scheme to regenerate schools in Luton and several parts of the school including the 'Main Block' and the 'Science Block' would be scheduled to be rebuilt in the coming years.

Its last report gave the school an excellent feedback, including talking about the 'good quality of the teaching in lessons' and the 'very good management and leadership in the school'. Main areas for improvement included the ICT Provision and the induction process of new students. These areas and others, are currently being addressed and substantially improved with the help of funding and support from the and the . [http://www.cardinalnewman.luton.sch.uk/ofsted.html] . Cardinal Newman is currently ranked in the top 3 for KS3 and results in Luton, and 1109 out of 3579 in England. [http://news.bbc.co.uk/1/shared/bsp/hi/education/03/school_tables/secondary_schools/html/821_4606.stm]

The School motto is "Ex Umbris In Veritatem", which means "Out of The Shadows and into The Truth" and the School's Mission Statement is "Together towards our Lord, through learning, love and faith"

There have been several famous people that have attended Cardinal Newman and this includes: