William Randolph Hearst's newspapers began syndicating material in 1895 after receiving requests from other newspapers. In 1914, Hearst and his manager Moses Koenigsberg consolidated all of Hearst's syndication enterprises under one banner. Koenigsberg gave it his own name (koenig=king) when he launched King Features Syndicate. Production escalated in 1916 with King Features buying and selling its own staff-created feature material. A trade publication, Circulation, was published by King Features between 1916 and 1933. Syndication peaked in the mid-1930s with 130 syndicates offering 1,600 features to more than 13,700 newspapers.[2]

In 1941, Koenigsberg wrote an autobiographical history of the company, King News. Hearst paid close attention to the comic strips, even in the last years of his life, as is evident in these 1945-46 correspondence excerpts, originally in Editor & Publisher (December 1946), about the creation of Dick's Adventures in Dreamland, a strip which debuted Sunday, January 12, 1947, written by former Daily News reporter Max Trell and illustrated by Neil O'Keefe (who also drew for King Features a strip based on Edgar Wallace's Inspector Wade of Scotland Yard):

Hearst to King Features president J. D. Gortatowsky (December 28, 1945): "I have had numerous suggestions for incorporating some American history of a vivid kind in the adventure strips of the comic section. The difficulty is to find something that will sufficiently interest the kids... Perhaps a title, Trained by Fate, would be general enough. Take Paul Revere and show him as a boy making as much of his boyhood life as possible, and culminate, of course, with his ride. Take Betsy Ross for a heroine, or Barbara Frietchie... for the girls."

King Features editor Ward Greene to Hearst: "There is another way to do it, which is somewhat fantastic, but which I submit for your consideration. That is to devise a new comic... a 'dream' idea revolving around a boy we might call Dick. Dick, or his equivalent, would go in his dream with Mad Anthony Wayne at the storming of Stony Point or with Decatur at Tripoli... [This would] provide a constant character... who would become known to the kids."

Hearst to Greene: "The dream idea for the American history series is splendid. It gives continuity and personal interest, and you can make more than one page of each series... You are right about the importance of the artist."

Greene to Hearst (enclosing samples): "We employed the dream device, building the comic around a small boy."

Hearst to Greene: "I think the drawing of Dick and His Dad is amazingly good. It is perfectly splendid. I am afraid, however, that similar beginning and conclusion of each page might give a deadly sameness to the series... Perhaps we could get the dream idea over by having only the conclusion on each page. I mean, do not show the boy going to sleep every time and then show him waking up, but let the waking up come as a termination to each page... Can you develop anything out of the idea of having Dick the son of the keeper of the Liberty Statue in New York Harbor? I do not suggest this, as it would probably add further complications, but it might give a spiritual tie to all the dreams. The main thing, however, is to get more realism."

Greene to Hearst: "We do not have to show the dream at the beginning and end of every page... If we simply call the comic something like Dreamer Dick, we would have more freedom... Some device other than the dream might be used... A simple method would be to have him curl up with a history book."

Hearst to Greene: "If we find [the first series] is not a success, of course we can brief it, but if it is a success it should be a long series."

Greene to Hearst: "I am sending you two sample pages of Dick's Adventures in Dreamland which start a series about Christopher Columbus."

Hearst to Greene: "In January, I am told, we are going to 16 pages regularly on Puck, the Comic Weekly. That would be a good time to introduce the Columbus series, don't you think so?"

In the 1940s, Ward Greene was King Features' editor, having worked his way up through the ranks. He was a reporter and war correspondent for the Atlanta Journal from 1913 to 1917, moving to the New York Tribune in 1917 and then the New York Journal as correspondent in France and Germany (1918–19). He joined King Features in 1921, became a writer and editor of the magazine section in 1925, advancing to executive editor and general manager.

After Greene, Sylvan Byck was the head editor of the syndicate's comics features for several decades, from the 1950s until his retirement in 1978. Byck, who had worked for King Features for more than 40 years, was 78 when he died July 8, 1982. 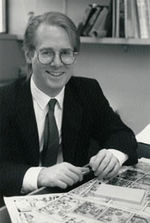 In 1978, cartoonist Bill Yates took over as King Features' comics editor. He had previously edited Dell Publishing's cartoon magazines (1000 Jokes, Ballyhoo, For Laughing Out Loud) and Dell's paperback cartoon collections. Yates resigned from King Features at the end of 1988 in order to spend full time on his cartooning, and he died March 26, 2001. In 1988, Yates was replaced by Jay Kennedy, author of The Official Underground & Newave Comix Price Guide (Norton Boatner, 1982). On March 15, 2007, Kennedy drowned in a riptide while vacationing in Costa Rica.

King Features appointed associate editor Brendan Burford to the position of comics editor on April 23, 2007. Burford, who attended the School of Visual Arts, was employed for a year as an editorial assistant at DC Comics before joining King Features as an editorial assistant in January 2000. Working closely with Jay Kennedy over a seven-year span, he was promoted from assistant editor to associate editor to editor.

In 2007, King Features donated its collection of comic strip proof sheets (two sets of over 60 years accumulation) to the Billy Ireland Cartoon Library & Museum and the Michigan State University Comic Art Collection while retaining the collection in electronic form for reference purposes.[3]

When asked to speak in public, Byck made a point of telling audiences that King Features received more than 1,000 strip proposals annually but chose only one each year. However, in Syd Hoff's The Art of Cartooning (Stravon, 1973), Byck offered some tips regarding strip submissions, including the creation of central characters with warmth and charm and the avoidance of "themes that are too confining", as he explained:

Although characterization is the most important element of a comic, the cartoonist also must cope with the problem of choosing a theme for his new strip. What will it be about? Actually, it is possible to do a successful comic strip about almost anything or anybody if the writing and drawing are exactly right for the chosen subject. In general, though, it is best to stay away from themes that are too confining. If you achieve your goal of syndication, you want your strip to last a long time. You don't want to run out of ideas after a few weeks or months. In humor strips, it is better to build around a character than around a job. For example, it is possible to do some very funny comic strip gags about a taxi driver. But a strip that is limited to taxi driver gags is bound to wear thin pretty fast. I'd rather see a strip about a warmly funny man who just happens to earn his living as a cabbie and whose job is only a minor facet of his potential for inspiring gags. Narrative strips can be and often are based on the central character's job. For example, the basis of a private eye strip is the work he does. But even here the strip will only be as successful as the characterization in it. The big question is: what kind of a man is this particular private eye?[4]

Many King characters were adapted to animation, both theatrical and television cartoons.[5] Strips from King Features were often reprinted by comic book publishers. In 1967, King Features made an effort to publish comic books of its own by establishing King Comics. This short-lived comic book line showcased King's best-known characters in seven titles: Beetle Bailey, Blondie, Flash Gordon, Jungle Jim, Mandrake the Magician, The Phantom and Popeye. The comics imprint existed for a year-and-a-half, with titles cover-dated from August 1966 to December 1967. When it ended, the books were picked up and continued by Gold Key Comics, Harvey Comics and Charlton Comics.

In addition to extensive merchandising and licensing of such iconic characters as Betty Boop and Popeye, King Features has diversified to handle popular animation and TV characters (from Kukla, Fran and Ollie to Howdy Doody, Mr. Bill and Mr. Magoo), plus publicly displayed, life-size art sculptures—CowParade, Guitarmania and The Trail of the Painted Ponies. King Features also represents David & Goliath, an apparel and accessories line popular with teenagers.

As a sales tool, the King Features design team created colorful strip sample folders resembling movie press kits. With rising paper costs and the downsizing of newspapers, the comic strip arena became increasingly competitive, and by 2002 King salespeople were making in-person pitches to 1,550 daily newspapers across America. King was then receiving more than 6,000 strip submissions each year, yet it accepted only two or three annually. Interviewed in 2002 by Catherine Donaldson-Evans of Fox News, Kennedy commented:

It is difficult for cartoonists to break into syndication, but contrary to popular understanding, there's more new product being pitched now than 30 years ago. In that regard, there are more opportunities for new cartoonists. There's a finite amount of space to run comic strips—less now than 50 years ago. There are fewer two-paper cities and a lot of papers have shrunk their page size. New strips can succeed. The new cartoonists just have to be that much better.[6]

Confronted by newspaper cutbacks, King Features has explored new venues, such as placing comic strips on mobile phones. In 2006, it launched DailyINK, an online service which initially billed subscribers $15 annually. A subscription showed up as a charge from Reed Brennan Media Associates, the online merchant for DailyINK. On a web page and via email, the DailyINK service made available more than 90 vintage and current comic strips, puzzles and editorial cartoons.[7] The vintage strips included Bringing Up Father, Buz Sawyer, Flash Gordon, Krazy Kat, The Little King, The Phantom and Rip Kirby. Jay Kennedy introduced the service early in 2006, commenting:

Comics are consistently ranked among the most popular sections by newspaper readers. However, because of space, newspapers are not able to offer as vast a selection as many readers would like, and therefore millions of comic lovers are often not exposed to some of the most creative strips. In creating DailyINK, we wanted to ensure that fans had a destination where they could experience our complete line-up of award-winning comic artists and writers. DailyINK really sets the standard for comics online. By offering all of our current favorites updated daily, along with access to our archives of beloved characters as well as political humor and games, we have designed DailyINK.com as a destination fans will want to visit every day for something new.

In November 2008, King Features introduced Comics Kingdom, a digital platform that newspapers can embed on their sites. Comics Kingdom makes it possible to display at least 60 strips next to local and national ads on newspaper-owned properties, along with animated videos. King Features President T.R. "Rocky" Shepard commented, "On the print side in daily newspapers, the comics are so tight you don't see a lot of advertising adjacencies. Comics Kingdom is a solution to some of the challenges that newspaper companies are facing today." According to Shepard, Comics Kingdom was planned to break even a year after its launch by splitting ad revenue with newspapers carrying the feature; those papers make local sales, while King handles national sales. During the 30-day period strips are made available on the newspaper sites, readers could post comments on local community forums.[8]