Coffee Republic is a British coffee bar and deli franchise chain founded in 1995.

Coffee Republic Ltd. is founded in Greece by Kostas Dalakouras and partners and still operates in Horeca market all over Greece, providing gourmet coffee products and services. The company is Coffee Republic S.a. now and owns the national trademark for Greece.

Coffee Republic finds its feet and opens a further 7 stores in London and opens its first stores in Newcastle and Manchester.

The group enters the Alternative Investment Market (AIM) by reversing into Arion Properties. The group grows to 24 branches after opening 17 new sites between March and November and has by now expanded beyond the capital to York, Birkenhead, Newcastle and Manchester.

July: Coffee Republic switches from AIM to the full list. At this point, it has 61 coffee bars and cafés and announces plans to open 80 more by 2002. 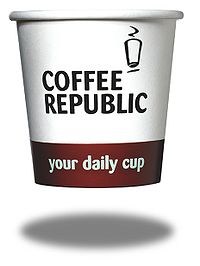 March: Hashemi steps down as chief executive, but continues as a non-executive director. He returns as executive chairman in the summer of 2002.

In July, the group announces plans to halt its expansion programme, sell underperforming bars and launch a strategic business review as annual losses grow. A number of takeover talks ensue with easyGroup, Benjys and Caffè Nero but all offers are rejected. Coffee Republic sells 13 sites to Starbucks and returns to an AIM listing.

August: Coffee Republic unveils a survival plan to convert itself into a New York-style deli-bar chain called Coffee Republic Deli and whittle its numbers down to a core of 50 outlets. It pilots the concept at Baker Street and Exchange Street in London. 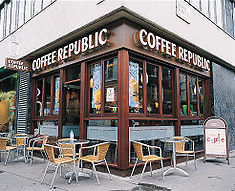 November: The group signs its first franchise deal and ends the year with four franchised outlets. It intends to retain just 10 to 15 bars under company ownership.

October: Founder Bobby Hashemi is ousted in a shareholder revolt replaced as chairman by Peter Breach.[1]

The company signs a franchise agreement, which will see the brand launched in Northern Ireland, the Republic of Ireland and also Turkey.

May: From 1 May, customers are offered free Wi-Fi across the majority of UK coffee bar estate (10 minutes free then further access subject to purchase). The WiFi is supplied by CommsPort.[2] First bar opening in Malta Airport.

July: Coffee Republic announces that Steven Bartlett, the former shareholder who ousted the company's founder, Bobby Hashemi, in October 2006, is to step down as chief executive.

September: A contactless payment trial launches, a new quick and easy way to pay for purchases of £10 and under using OneTouch payment.

July: The Company is placed into Administration in early July and trading in shares is suspended. At the end of July, following the closure of 18 Bars, Coffee Republic is bought out of administration by property firm Arab Investment Ltd. The new company trades as Coffee Republic Trading Ltd.[4][5]

September: Coffee Republic announces that it has secured a deal to open the highest urban coffee shop in the UK, 300 m up on the observation deck of the Pinnacle building in London.[6]