Tamborine Mountain is a 28 square kilometres (11 sq mi) plateau (8 km long by 4 km wide) in the Scenic Rim, Gold Coast Hinterland, south-east Queensland, Australia. The name is of Aboriginal origin and has nothing to do with the musical instrument.

Timber cutting at Tamborine Mountain in 1912 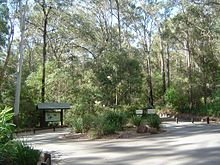 Tamborine Mountain was inhabited by Aborigines for tens of thousands of years and, at the time of early European settlement, lay in the territory of the Wangerriburras. The origin of the name Tamborine, which means 'wild lime' and refers to the finger lime trees growing on the mountain, is in the Yugambeh language.[1]

Until it was opened for selection in 1878[2] it was covered with a diverse range of forest types.[1] In that year the first white settler, John O'Callaghan selected a parcel of land on the mountain.[3] Much clearing for agriculture took place, though efforts were made to protect the natural values of the area, with Witches Falls National Park (now part of the Tamborine National Park) being declared in 1908, the first in Queensland.[1] The Tamborine National Park is made up of 12 separate sections of land, mainly remnant rainforest, on the plateau and surrounding foothills. A tourist road to the mountain was opened in 1924.[3]

The geological origin of the plateau is a lava flow from the Mount Warning volcanic eruption 22 million years ago. Tamborine Mountain rises at the start of the north-east section of the Scenic Rim, the name given to a group of mountains in South East Queensland.

The climate is subtropical, with the annual rainfall of about 1,550 mm[2] falling mainly between December and March. Temperatures vary between maxima of 18 °C in winter and 32 °C in summer, averaging some four or five degrees cooler than the surrounding lowlands. With its fertile red volcanic soil and high rainfall, the plateau produces rich crops of avocados, kiwifruit, passionfruit, rhubarb, apples and mangoes. With its cool climate and spectacular scenery, as well as its proximity to Brisbane, the Gold Coast and Surfers Paradise, it is a major tourist destination. 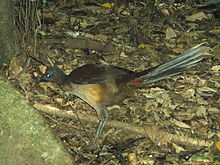 The mountain is an important area for Albert's Lyrebirds

Parts of the plateau and surrounding foothills encompassing the wet subtropical rainforest habitats below the largely cleared plateau summit, and above the surrounding eucalypt forests, have been identified as a 38 square kilometres (15 sq mi) Important Bird Area (IBA) by BirdLife International. It includes the southern fragments of the Tamborine National Park. The IBA supports an isolated northern population of Albert's Lyrebirds, as well as Pale-yellow Robins, Green Catbirds, Regent Bowerbirds and Australian Logrunners.[4] Additional significant birds recorded from the site are Glossy Black Cockatoos, Sooty Owls, Marbled Frogmouths and Noisy Pittas. Other animals present in the IBA include Platypuses, Short-beaked Echidnas and Richmond Birdwings.[5]

Human settlement on the plateau is centred on three village communities: North Tamborine, Eagle Heights and Mount Tamborine, with a total population of about 5,100.[2] The plateau is classified as a rural area, with zoning restrictions that prohibit property from being subdivided. There is no reticulated water supply or sewerage system, and residents are dependent on rainwater, bores and septic systems. Many residents commute to work on the Gold Coast or in Brisbane.

Tamborine Mountain attracts a large number of tourists to "Gallery Walk" along Long Road, a street devoted to art galleries, cafes and souvenir shops.[2] The street is not particularly noteworthy, but remains a tourist centre due to it being directly on the way from the Gold Coast. Other tourism-heavy areas include Main Street, two one-way roads with cafes, a supermarket, hardware stores, a newsagent and various other shops, and the Tamborine Showground Markets, held every second Sunday of the month. The Glow-Worm Caves are a man-made attraction which opened to visitors in March 2006.[6]

Tamborine is well known for walking tracks winding through rainforest regions and occasionally past cliffs or waterfalls. The most well-known ones are the Curtis Falls rainforest track, and the Knoll, though there are others. The tracks are mainly used by tourists, although locals who have lived on the mountain for a while may visit them occasionally, or as part of an exercise regime.