Commuting
For other uses, see Commute.

Commuters on the New York City Subway during rush hour. 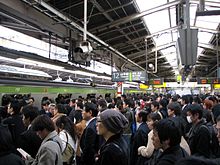 Commuting is regular travel between one's place of residence and place of work or full time study. It sometimes refers to any regular or often repeated traveling between locations when not work related.

The word commuter derives from early days of rail travel in US cities such as New York, Philadelphia, Boston and Chicago, where, in the 1840s, the railways engendered suburbs from which travellers paying a reduced or 'commuted' fare into the city. Later, the back formations "commute" and "commuter" were coined therefrom. Commuted tickets would usually allow the traveller to repeat the same journey as often as they liked during the period of validity: Normally, the longer the period the cheaper the cost per day.[1]

Before the 19th century, most workers lived less than an hour's walk from their work. Today, many people travel daily to work a long way from their own towns, cities, and villages, especially in industrialised societies. Depending on factors such as the high cost of housing in city centres, lack of public transit, and traffic congestion, modes of travel may include automobiles, motorcycles, trains, buses, and bicycles.

Commuting has had a large impact on modern life. It has allowed cities to grow to sizes that were previously not practical, and it has led to the proliferation of suburbs. Many large cities or conurbations are surrounded by commuter belts, also known as metropolitan areas, commuter towns, dormitory towns, or bedroom communities. The prototypical commuter lives in one of these areas and travels daily to work or to school in the core city. Institutions that have few dormitories or near-campus student housing are called commuter schools in the United States.

As urban sprawl pushes farther and farther away from central business districts, new businesses can appear in outlying cities, leading to the existence of the reverse commuter who lives in a core city but works in the suburbs, and to a type of secondary commuter who lives in a more distant exurb and works in the outlying city or industrial suburb.

Most commuters travel at the same time of day, resulting in the morning and evening rush hours, with congestion on roads and public transport systems not designed or maintained well enough to cope with the peak demands. As an example, Interstate 405 located in Southern California, is one of the busiest freeways in the United States. Commuters may sit up to two hours in traffic during rush hour. Construction or accidents on the freeway distract and slow down commuters, contributing to even longer delays.

The suburbs in the United States and elsewhere tend to have less air pollution than their neighboring inner cities, even though more workers in the inner cities use public transport. Some governments and employers have introduced employee travel reduction programs that encourage such alternatives as car-pooling and telecommuting. Some are also carpooling using Internet sites to save money.[2] Alternatives like personal rapid transit have also been proposed to reap the energy-efficiency benefits of a mass transit system while maintaining the speed and convenience of individual transport.

Cars not carrying passengers use fuel and roads less efficiently than shared cars or public transport, and increase traffic congestion. However, commuting alone by car is often a more efficient method for people doing so, as their travel times tend to be lower. Commuting by car is a major factor contributing to air pollution. Carpool lanes help commuters reach their destinations more quickly, encourage people to drive together, and reduce air pollution.