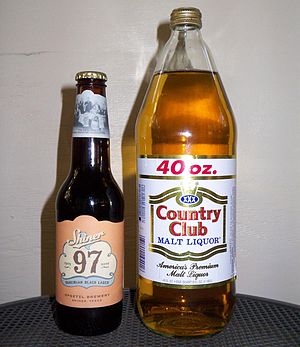 Malt liquor is a North American term referring to a type of beer with high alcohol content. In legal statutes, the term often includes any alcoholic beverage above or equal to 5% alcohol by volume made with malted barley. In common parlance, however, it is used for high-alcohol beers made with ingredients and processes resembling those in American-style lager. However, this label is subject to the viewpoint of the brewer, as there are indeed examples of brews containing high-quality, expensive ingredients that brewers have chosen to label as "malt liquors."[1]

Malt liquor is a strong lager or ale in which sugar, corn or other adjuncts are added to the malted barley to boost the total amount of fermentable sugars in the wort, and thus the final alcoholic strength produced. These beers tend to be mildly hopped (that is, they are not very bitter).

Malt liquor is typically straw to pale amber in color. While typical beer and malt liquor are both made primarily from barley, water, and hops, malt liquors tend to make much greater use of inexpensive adjuncts such as corn, rice, or dextrose. Use of these adjuncts, along with the addition of special enzymes, results in a higher percentage of alcohol than that which is typical for beer. Higher alcohol versions, sometimes called "High Gravity" or just "HG", may contain high levels of fusel alcohols, which gives off solvent- or fuel-like aromas and flavors.[2]

The apparently confusing and inconsistent use of the term 'malt liquor' has to do with the vagaries of American alcoholic beverage regulations, which can vary from state to state. In some states, "malt liquor" refers to any alcoholic beverage made by fermenting grain and water; in these states a non-alcoholic beer may also be called a non-alcoholic or non-intoxicating malt liquor. In some states, products labeled 'beer' must fall below a certain alcohol content, and beers that exceed the mark must be labeled as 'malt liquor'. While ordinary beers in the United States average around 5% alcohol by volume, malt liquors typically range from 6% up to 9% alcohol by volume. A typical legal definition is Colorado's Rev. Stat. ss. 12-47-103(19), which provides that:

"Malt Liquors" includes beer and shall be construed to mean any beverage obtained by the alcoholic fermentation of any infusion or decoction of barley, malt, hops or any other similar products, or any combination thereof, in water containing more than three and two-tenths percent of alcohol by weight.

The term "malt liquor" is documented in England in 1690 as an alternative word for ale.[3] The first mention of the term in North America appears in a patent issued by the Canadian government on July 6, 1842, to one G. Riley for "an improved method of brewing ale, beer, porter, and other maltliquors."

While Colt 45, St. Ides, Mickey's, Steel Reserve, King Cobra, and Olde English 800 are most closely associated with malt liquors in the United States, the beverage itself is older than these products. Clix is often credited as the first malt liquor made in the United States, granted a patent in 1948.[4] The first widely successful malt liquor brand in America was Country Club, which was produced in the early 1950s by Brewmaster William Miller of the M.K. Goetz Brewing Company in St. Joseph, MO, and marketed toward middle-class White Americans.[5]

Today, malt liquors are marketed to an entirely different demographic, resulting in a stereotyping of the typical consumer. According to a study by Charles R. Drew University of Medicine and Science in California, malt liquor is the alcohol of choice of the homeless and unemployed.[6] Beginning in the 1980s, many brands of malt liquor began to aggressively target this market and used popular actors (such as Billy Dee Williams) or rappers in their advertisements; Ice Cube, for instance, appeared in radio advertisements for St. Ides. Some rappers vigorously opposed this trend, feeling that malt liquor manufacturers were exploiting the African American community. For example, Chuck D, of the group Public Enemy, took a very strong anti-malt liquor stance and once sued St. Ides over an advertisement that sampled his voice without permission.[7]

In the American vernacular, a forty-ounce or simply forty is a glass bottle that holds 40 fluid ounces (1.18 liters) of malt liquor.[2] Malt liquors are commonly sold in 40 oz bottles, as opposed to the standard twelve ounce (355 mL) bottle that contains a single serving of beer.[citation needed] American domestic "malt liquors" tend to be very inexpensive (generally less than $3 for a 40 oz. bottle), although this is not necessarily true for foreign imports that are also labeled "malt liquor."[citation needed]

At least for a brief period in the mid-1990s, some brands of malt liquor, including Olde English 800 and Mickey's, were available in even larger, 64-ounce glass bottles. Forty-ounce bottles are not permitted in some US states, such as Florida, where the largest container that a malt beverage may be sold at retail is 32 US fluid ounces.[9]

While American malt liquor brands are rarely, if ever, exported to Europe, similar inexpensive high-alcohol beers are available in many areas there; these include the "super-strength lagers" such as Tennents Super and Carlsberg Special Brew in the United Kingdom, and in France the "bières fortes" Amsterdam Navigator, Amsterdam Maximator and Bavaria 8.6; Arboga 10.2% of Sweden

There is a strong tradition of premium high-alcohol beers in Europe, including the Trappist beers of Belgium and The Netherlands, the bock beers of Germany and Austria, and the barley wines of the United Kingdom. Unlike American malt liquors and super-strength lagers, these are beers known for a full body, a complex aroma, and higher prices.

Malt liquor was referenced in the 2001 movie Pootie Tang, directed by Louis C.K.

Michael McTague, author of My Struggle: Coping with Alcoholism, has describes Malt Liquor as "The worst thing to ever happen to me."