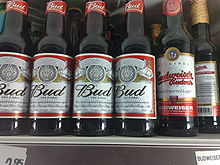 Bud bottle next to Czech Budweiser in Turkey

Budweiser is a 5% abv pale lager introduced in 1876 by Adolphus Busch and has become one of the best selling beers in the United States.[2] It is made with up to 30% rice in addition to hops and barley malt.[3] Budweiser is produced in various breweries located around the United States and the rest of the world. It is a filtered beer available in draught and packaged forms. Lower strength versions are distributed in regions with restrictive alcohol laws.

A version of Budweiser available in Europe. See Budweiser trademark dispute. In other parts of the world, the term 'Bud' may be used as an abbreviation for 'Budweiser'.

Budweiser Select, or Bud Select is a light pale lager that contains 4.3% ABV and 99 calories per 12 US fl oz serving (1,170 kJ/L).[4] Anheuser-Busch has aggressively promoted Budweiser Select. Its slogan was "The Real Deal". The company hired Jay-Z as a spokesman for the brand.

A version of Budweiser Select that contains 55 calories per 12 US fl oz serving (650 kJ/L) is "a direct counterstrike to Miller's MGD 64" according to Anheuser-Busch officials. Budweiser currently claims that it is the lightest beer in the world. The food energy in both Miller's MGD 64 and Budweiser's Select 55 have been reduced simply by lowering the fermentables content. MGD 64 has only 2.8% alcohol content and some Select 55 states "alcohol content not more than 3.2% by weight/ 4% by volume", possibly to allow its sale in areas where that is the limit. The actual alcohol content of "55" is reported to be 2.4% abv; by comparison, most beers have around 5%.

Introduced in 1994 as "Ice by Budweiser", it has more alcohol (5.5% ABV) than Budweiser. It is best known for an advertising campaign that involved a malevolent penguin that stalked Bud Ice drinkers and stole their beer.

Bud Ice is cheaper than most Budweiser products.

Budweiser Brew Masters' Private Reserve is an all-malt lager with a honey color and robust taste. It is based on a Budweiser brewmaster holiday tradition of collecting the richest part of the brew as it is tapped to the brew kettles to toast the holiday season."[5]

Bud Dry was introduced nationally in the U.S. in April 1989[6] with the slogan of "Why ask why? Try Bud Dry." It was originally successful in test markets and was expected to be a popular beer with the rise in light lager popularity. However, after the introduction of Bud Ice in 1994, Bud Dry wasn't heavily marketed. Production was discontinued in December 2010.

An attempt to appeal to the tastes of beer drinkers in the United Kingdom, this specially brewed beer contains 4.1% alcohol by volume.

A beer with caffeine, ginseng, guarana and alcohol. It contains 6.6% ABV as indicated on the label. It was marketed as a caffeinated malt beverage, similar to Sparks. On June 26, 2008, Anheuser-Busch announced that it would remove caffeine and guarana from the beverage in response to concerns that the product was being marketed to consumers under the age of 21.

A blend of Budweiser or Bud Light and Clamato. This beverage became available nationally in late 2007.[citation needed]

On October 5, 2009 Budweiser officially released Bud Light Golden Wheat, a response to the increase in the amount of wheat beers produced from craft brewers around the country. This beer has 118 calories per 12 US fl oz serving (1,390 kJ/L), 8.3 grams of carbohydrates and 4.1% alcohol by volume. It is an American Hefeweizen which is based on the classic German Hefeweizen style.

Budweiser Brew No. 66 is a 4% alcohol by volume lager that is brewed and distributed in the United Kingdom by InBev UK Limited. Launched in July 2010, Budweiser 66 is the newest member of the Budweiser family of beers with 84 calories in a 300 ml serving (just over 10 oz).[7] 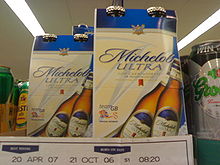 Michelob ULTRA on a supermarket shelf

Michelob is a 5% abv pale lager developed by Adolphus Busch in 1896 as a "draught beer for connoisseurs".[8] It was named after Michelob Michelob, a Bohemian brewmaster from Saaz, in the region famous for its Saaz hops. In 1961, Anheuser-Busch produced a pasteurized version of Michelob which allowed legal shipment of the beer across state lines. Bottled beer began to be shipped soon after, and the brand was introduced in cans in 1966. Bottled Michelob was originally sold in a uniquely-shaped bottle named the teardrop bottle because it resembled a water droplet. The teardrop bottle was awarded a medal from the Institute of Design in 1962. Five years later the bottle was redesigned for efficiency in the production line, and later it was abandoned for a standard bottle. The teardrop bottle was used again from January 2007 to October 2008.

The company introduced Michelob Light in 1978. Michelob Classic Dark, was made available in 1981 in kegs, with a bottled version following three years later. In 1991, Michelob Golden Draft was introduced to compete against Miller Genuine Draft in the Midwest.

1997 saw the introduction of several specialty beers under the Michelob marquee. These include:

AmberBock is a 5.2% abv amber lager which uses roasted black barley malt in the ingredients, and which received a World Beer Cup Bronze Medal in 1998.

From the beginning, the specialty beers have had a very limited distribution. The chief outlet has been through a "holiday sampler pack" produced during the Christmas holiday season. Other specialty beers that are no longer in production include Michelob Hefeweizen and Michelob Black & Tan. Some (notably Michelob AmberBock) have subsequently gone into larger production, while others have not. The brewery continues to experiment with specialty beers—in 2005 an oak-aged vanilla beer was sold under the Michelob logo, available in single pints. In 2006 Michelob added a chocolate beer to the oak-aged vanilla Celebrate holiday season beer released a year earlier. Michelob also brewed Michelob Bavarian Style Wheat and Michelob Porter for its "holiday sampler pack". In 2007, Michelob launched its Seasonal Specialty Line. These include:

The early 21st century saw in the U.S. a demand for diet beer similar to that of the early 1970s, and in 2002 the Michelob line responded with the introduction of Michelob Ultra, advertised as being low in carbohydrates. Later Michelob Ultra Amber, a darker, more flavorful beer, was added to this sub-line.

Michelob sponsored several episodes of the Diggnation podcast. The hosts, Kevin Rose and Alex Albrecht, sampled the beer during the show and several episodes included interviews with the company's head brew-master to discuss the different products that can be found in the sampler packs. Also, an episode of the show was filmed inside the Michelob brewery.

Shock Top is a 5.2% abv Belgian-style wheat ale introduced under the name Spring Heat Spiced Wheat as a seasonal beer in 2006, then all year from 2007.[9][10] The beer is brewed with wheat malt, two-row barley, orange, lemon, lime peel, coriander and Cascade and Willamette hops. Entering as the Spring Heat Spiced Wheat, Shock Top Belgian White won gold and bronze medals in the Belgian Wit (White) category at the 2006 and 2007 North American Beer Awards, respectively.[11]

Land Shark Lager, brewed in Jacksonville, Florida, is a 4.7% abv pale lager launched in 2006 as the house lager for "Jimmy Buffett's Margaritaville" restaurant chain. Under a sponsorship deal, Dolphin Stadium, home of the Miami Dolphins, Florida Marlins, and the Miami Hurricanes was renamed "Land Shark Stadium" for the 2009 football season. The contract ended in early 2010, and the stadium has since been renamed "Sun Life Stadium" as of January 18, 2010 in time for both the 2010 NFL Pro Bowl and Super Bowl XLIV.[20][21][22]

Jimmy Buffett's song "Fins" is about "sharks that can swim on the land," (in reference to men in a beach town trying to woo a vacationing woman) while the landshark is a recurring character portrayed by Chevy Chase in the TV show Saturday Night Live.

King Cobra (also known as "Venom") is a 6% alcohol by volume malt liquor introduced in 1984. It is brewed with a warmer fermentation than used for the company's pale lagers, and the ingredients include barley malt and corn.[24]

Tequiza was a 4,5% abv fruit flavoured pale lager introduced in 1998 in limited markets in the USA, then withdrawn in January 2009.[25] Tequiza Extra, with more Tequila flavour and less lime, was tried out in 2000.