Diet (nutrition)
This article is about the human diet. For a discussion of animal diets, see List of feeding behaviours. 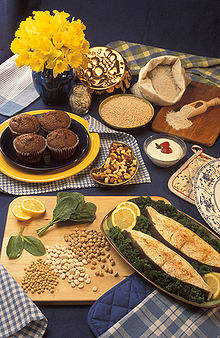 A selection of foods consumed by humans; note that the human diet can vary widely.

In nutrition, diet is the sum of food consumed by a person or other organism.[1] Dietary habits are the habitual decisions an individual or culture makes when choosing what foods to eat. With the word diet, it is often implied the use of specific intake of nutrition for health or weight-management reasons (with the two often being related). Although humans are omnivores, each culture and each person holds some food preferences or some food taboos, due to personal tastes or ethical reasons. Individual dietary choices may be more or less healthy. Proper nutrition requires the proper ingestion and, equally important, the absorption of vitamins, minerals, and food energy in the form of carbohydrates, proteins, and fats. Dietary habits and choices play a significant role in health and mortality, and can also define cultures and play a role in religion.

Traditional diets are those of native populations such as the Native Americans, Khoisan or Australian Aborigines. Often, to qualify for cultural cuisine, traditional diets include more organic farming and seasonal food according to food origins.

Traditional diets vary with availability of local resources, such as fish in coastal towns, eels and eggs in estuary settlements, or squash, corn and beans in farming towns, as well as with cultural and religious customs and taboos. In some cases, the crops and domestic animals that characterize a traditional diet have been replaced by modern high-yield crops, and are no longer available.[2] The slow food movement attempts to counter this trend and to preserve traditional diets.

A recent study has suggested that traditional diets may have been more balanced than first thought. New research indicates grains were part of the diet of ancient people in Italy, Russia and the Czech Republic.[3]

Some cultures and religions have restrictions concerning what foods are acceptable in their diet. For example, only Kosher foods are permitted by Judaism, and Halal foods by Islam.

Writers such as Michael Pollan and Mark Bittman[6] urge reduced animal consumption in the developed world for improved health and reduced impact on the environment. Many people choose to forgo food from animal sources to varying degrees (flexitarianism, vegetarianism, veganism, fruitarianism) for health reasons, or issues surrounding morality, or to reduce their personal impact on the environment. Raw foodism is another contemporary trend. These diets may require tuning or supplementation to meet ordinary nutritional needs.

In addition to culture, religion, and personal choices, diet is also influenced by economics. Throughout history and in contemporary life, poverty is often associated with the inability to afford meat, or with malnutrition.

A particular diet may be chosen to seek weight loss or weight gain. Changing a subject's dietary intake, or "going on a diet", can change the energy balance and increase or decrease the amount of fat stored by the body. Some foods are specifically recommended, or even altered, for conformity to the requirements of a particular diet. These diets are often recommended in conjunction with exercise. Specific weight loss programs can be harmful to health, while others may be beneficial (and can thus be coined as healthy diets). The terms healthy diet and diet for weight management are often related, as the two promote healthy weight management. Having a healthy diet is a way to prevent health problems, and will provide your body with the right balance of vitamins, minerals, and other nutrients. [7]

An eating disorder is a mental disorder that interferes with normal food consumption. Eating disorders often affect people with a negative body image.

A healthy diet is one that is arrived at with the intent of improving or maintaining optimal health. This usually involves consuming nutrients by eating the appropriate amounts from all of the food groups, including an adequate amount of water.[8][9][10] Since human nutrition is complex, a healthy diet may vary widely, and is subject to an individual's genetic makeup, environment, and health. For around 20% of the human population, lack of food and malnutrition are the main impediments to healthy eating.[citation needed] Conversely, people in developed countries have the opposite problem; concern is often not about volume of food but appropriate choices.[11]