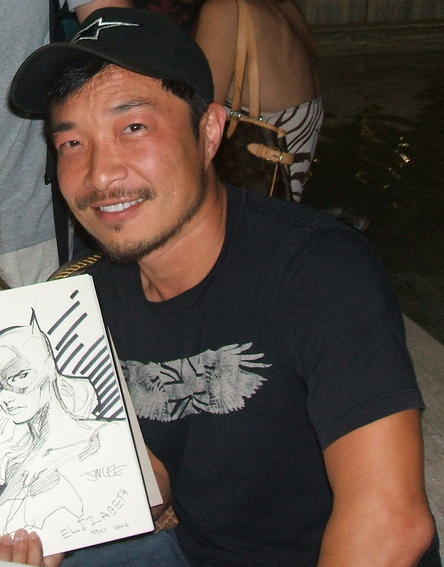 Jim Lee (born , ) is a Korean-American , and . After graduating from Princeton, he decided to attempt illustrating comic books, and met with success. [ [http://www.comicbookresources.com/news/newsitem.cgi?id=6772 "New York Comic Con, Day One: Jim Lee Spotlight"] , "", . Retrieved on .] Lee's distinctive, crisply hatched line art style and rigid, idealized anatomical forms established a new stylistic standard for superhero comic-book illustration and reinforced a popular trend away from brushed to penned inking in the late 20th and early 21st century.Fact|date=March 2008 Lee is currently one of the most successful artists in American comics.

He has received a great deal of recognition for his work in the industry, including the Harvey Special Award for New Talent in 1990.

Lee was born in , , but grew up in . Lee's classmates predicted in his senior yearbook that he would found his own comic book company. But, initially, Lee seemed resigned to following his father's career in medicine. Lee attended and majored in psychology with the intention of becoming a medical doctor. An elective course in Fine Arts reawakened his love for drawing; he graduated in 1986, putting medical school on hold to attempt a career in comic book illustration.

Jim Lee is not related to , , or , three other prominent names in the American comic book industry although many people, including Stan Lee himself, have joked about Jim being related to Stan. After inking only the cover of "Samurai Santa" #1 for a small, independent publisher, Lee found success at the North American comics publisher, , as a penciller. His early Marvel work included "" and "Punisher War Journal".

In 1989 Lee filled in for regular illustrator on "" #248 and did another guest stint on issues #256 through #258 as part of the "" storyline, eventually becoming the series' ongoing artist as of #267 when Silvestri left. During his stint on "Uncanny" Lee first worked with inker Scott Williams, who would become a long-time collaborator.

Lee’s artwork quickly gained popularity in the eyes of enthusiastic fans, which allowed him to gain greater creative control of the franchise. In 1991, Lee helped launch a second X-Men series simply called "X-Men", not only as the artist, but also as co-writer with long-time X-Men scribe . Lee designed new uniforms for characters such as Cyclops, , Rogue, and Storm, creating the images that an entire generation of X-Men readers would associate with the characters. He also co-created the once-popular character with . "X-Men" #1 is still the best-selling comic book of all time with sales of 8 million copies of the first issue, although multiple purchases of variant covers illustrated by Lee accounted for part of the sales frenzy.

However, Lee ran into some creative hurdles. Claremont found it harder to work with Lee as their vision of the characters and storylines diverged. There was a prolonged power struggle over the future of the X-Men and in the end, Marvel X-Men editor favored the wildly popular Lee, causing Claremont to depart the new "X-Men" series with issue 3. Despite this, Claremont and Lee later reunited on various projects and are reportedly on friendly terms. Claremont and Lee even engaged in a mutual interview for "Wizard" magazine in 1995.

Image Comics and WildStorm, and return to Marvel

In 1992, Lee was one of seven artists who broke away from Marvel to form . Lee's group of titles was christened Wildstorm Productions and published Lee's pet title "", which Lee pencilled and co-wrote, and other series created by Lee sharing the same "universe", but with a minor implication of the artist in his production. The other main series of the initial years of Wildstorm, with characters created by Jim Lee and with a minor participation of the artist in his production were "Stormwatch" (Lee was co-plotter of the first 8 issues and cover artist for the 3 first issues), "" (pencils for 30-40 pages of the firsts chapters, and plots and covers for the first 12 issues ongoing series) and "" (co-plotter for about 3 years and penciller of 2 issues). Later, other ongoing series of the same universe were launched with little to no participation of Jim Lee in his production, like "" (created by , but sharing the Wildstorm Universe created by Jim Lee)," " (a Gen13 spin-off), "Backlash" (a solo title of a StormWatch character) or " "(solo title for a main WildC.A.T.s character), and several mini-series, most notably (that ties together characters from "WildC.A.T.s", "StormWatch", "Gen13", "Deathblow" and "Wetworks"). Like most Image properties, these series were criticized for high levels of violence (although they were no more violent than the usual Marvel or DC comic at the time), sexual references, and for emphasizing flashy art over storytelling. Despite such claims, Lee's stable of titles sold well, often exceeding a million copies per month in the early going, charting new highs in sales from an independent publisher. He also participated in the crossover mini-series "" co-published between and (from his Productions).

As publisher, Lee later also expanded his comics line creating two publishing imprints of Wildstorm, Homage and Cliffhanger (that years later merged and were replaced by a single Wildstorm Signature imprint), to publish creator-owned comics by some selected creators of the US comics industry. Initially, Homage was a more writer-driven imprint, debuting with winners " "and 's "". Cliffhanger was initially an artist-driven imprint, created to publish the works of three young "hot artists" of the time, 's "", 's " "and ' "Crimson", three series that were top sellers for the industry.

Lee and , another Marvel-illustrator-turned-Image-founder, returned to Marvel in 1996 to participate in a reboot of several classic characters; the project was known as "". While Liefeld reworked "" and "The Avengers", Lee plotted "" and wrote and illustrated "The ". Lee managed to catapult "Fantastic Four" and "Iron Man" to the top of the sales charts, although fan reaction to this revamp of such well-known characters was mixed. Halfway through "Heroes Reborn", Liefeld was fired from the project (poor sales--relative to Lee's output--were cited) and Lee's studio finished all four series. At the end of the one-year deal, Lee and Marvel agreed to hand the books over to other creators.

Lee then concentrated in the Wildstorm line, attempting to break away from the stereotype of Image comics as all style and no substance by publishing critically acclaimed series' "" and "Planetary". In publishing 's line, Wildstorm brought arguably the English-language comics most critically acclaimed writer back into mainstream publishing after almost a decade of independent work. Lee himself wrote and illustrated a 12-issue series called "Divine Right", in which an slacker inadvertently manages to download the secrets of the universe, and is thrown into a wild world.

In late 1998, however, Lee left and sold Wildstorm to . Lee's career as a publisher had mostly precluded art jobs and he desired to return to his roots as an illustrator. In 2003 he collaborated on a 12 issue run on "" with writer . "" became a runaway sales success. This was followed by a year's stint on "", called "For Tomorrow," with writer . In 2005, Lee teamed with Frank Miller on the new series "All Star Batman and Robin, the Boy Wonder", a series plagued by delays.

Lee continues to run the company he founded, working side by side with new artists. Notable former WildStorm artists include and . In September 2006, Jim Lee returned to "WildC.A.T.s" with as the writer. Lee pencils both "WildC.A.T.s" and "". Both titles have been plagued with delays. The gap between "All-Star Batman and Robin" #4 and #5 was one year, and to date, only one issue of "WildC.A.T.s" (Vol. 4) has been published. Lee claims he does not intend to leave the Batman title until Frank Miller has finished his run on the series. He also drew alternate cover art for the "" series. It has also been announced that Jim Lee will be involved with the upcoming DC Comics as Executive Creative Director, drawing variant covers for . The last variant cover that will be produced will be issue #5.

(In all the comics listed, Jim Lee did all the interiors, except where noted)

* "Darker Image" (Image, 1993) & "Deathblow" #1-2 (Image/Wildstorm, 1993). Lee draws three short stories featuring the character Deathblow, in a ""-like style.
* "Gen 13" #6-7. A 2-issue story set in Italy (later collected in a "Gen 13: European Vacation" prestige one-shot). Lee had previously visited Italy as a guest at a comic convention. Later in his career, Lee lived several months in Italy.
* "WildC.A.T.s/X-Men: The Silver Age" (Marvel/Image, 1997). Second of four one-shots crossover between WildC.A.T.s and the X-Men, each one in a different moment of their history (The Golden Age, The Silver Age, The Modern Age & The Dark Age). This isse is a Grifter and Jean Grey story, set in the early years of the original X-Men (when the team was Cyclops, Beast, Angel, Iceman and Jean Grey), with Nick Fury as a guest star.
* "StormWatch" #47 (Image/Wildstorm, 1997). During the run in the title, Jim Lee drew a stand-alone story using only splash-pages, trying to bring attention to the series (little after, the series was relaunched with as StormWatch Vol.2 #1).
* "Flinch" #1 (DC/Vertigo, 1999). Lee drew an 8-page short story, where works in a new and more "clear" style, that later was used in the flasbacks scenes in his "Batman: Hush" storyline.
* "Just imagine Stan Lee with Jim Lee creating Wonder Woman" (DC Comics, 2001).
* "Coup d'état: Sleeper" (DC/Wildstorm, 2004). With writer . First of a 4-part "event" in the Wildstorm Universe.
* "Justice League of America #0" (DC Comics, 2007). Page 16 only.

"Sometimes I wonder if we ever really improve as artists or if the nirvana derived from completing a piece blinds us enough to love what we have created and move on to the next piece. If we could see the work as it is, with years of reflection in the here and now, how many images would end up in the trash rather than on the racks?" [ [http://gelatometti.blogspot.com/2005/01/x-men-redux.html Blog entry on Lee's blog; , .] ]