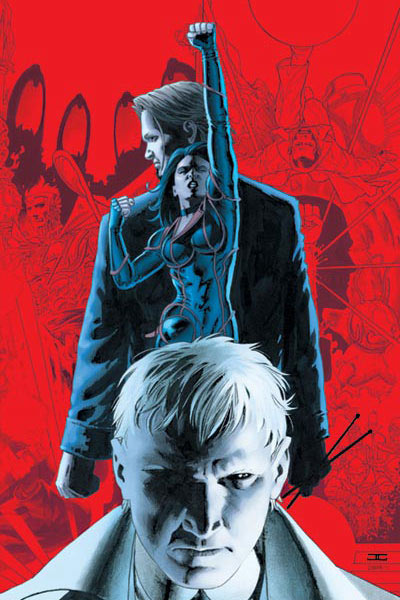 "Planetary" is an American series created by (writer) and (artist), published by the imprint of . Planetary also refers to the group portrayed in the series.

Mr. Ellis confirmed, on his 'Bad Signal' mailing list, that Mr. Cassaday would finish the final issue in early 2008. As of late September of 2008, Mr. Ellis stated that the issue was about halfway finished.

has colored almost every issue of the series.

Planetary is an billing themselves as "Archaeologists of the Impossible", tracking down the world's . Funded by the mysterious , who it is said could be anyone from to , the field team consists of three s: , who is strong, fast and nearly invulnerable; The Drummer, who can detect and manipulate nearby information streams, most commonly used to manipulate computers and other electronics; the new recruit , who can extract heat from nearby substances at will, freezing them; and the former third man , who has a "selective physics-distortion field".

The series is set in the Wildstorm Universe, along with other titles such as "Stormwatch", "", "" and "". Snow was born on , , as was of , and the two know each other. "Planetary" rarely crosses over with other Wildstorm series, although references are made to characters in other series, such as Henry Bendix from "Stormwatch".

Planetary's field team travels the world investigating strange phenomena: s and other beings, unusual s, other superhumans, and powerful secrets which certain individuals are trying to keep hidden from the rest of the world. Their purpose in doing this is partly curiosity, and partly to use what they learn for the betterment of mankind. There are, however, groups who oppose their goals, and the organization has a substantial history which is gradually revealed during the series.

Mr. Ellis, the creator and writer, has always intended the focus of the book to be the genre of superhero comics, rather than the superheroes themselves. "I wanted to do something that actually went deeper into the sub-genre, exposed its roots and showed its branches."

Typically, the public domain characters such as Holmes appear as themselves, while those still under copyright appear in altered but recognizably similar form. Thus, in some regards "Planetary" is similar to 's "".

The idea of the series is to create a concise world in which s of es, pulp fiction heroes, heroes, and characters from just about every possible format, live in one large universe while the Planetary team investigates them and ties together the ends. As Warren Ellis wrote in his proposal for the comic series: " [W] hat if you had a hundred years of superhero history just slowly leaking out into this young and modern superhero world of the Wildstorm Universe? What if you could take everything old and make it new again?" [cite web| url =http://www.warrenellis.com/planetary_proposal.htm | title =Planetary Proposal | accessdate =2006-11-10 | last =Ellis | first =Warren | authorlink =Warren Ellis | coauthors = | date =written November 1997, posted to web in 2000 | format =html | work =warrenellis.com | archiveurl =http://web.archive.org/web/20000711001623/http://www.warrenellis.com/planetary_proposal.htm | archivedate =2000-07-11 ]

The comic relies heavily on John Cassaday's distinctive art nouveau artwork, featuring a variety of styles of covers (with no consistent or ) and interior art, often paying to the respective sources from which each issue's characters and concepts are drawn. Rich Kreiner has described Mr. Cassaday's artwork in "" as being "close to the gold standard for fabulous realism in mainstream comics" [cite journal | last =Kreiner | first =Rich | year =2004 | month =February | title =Firing Line:Planetary/Batman | journal =The Comics Journal | volume =1 | issue =258 | pages =50–51 | id =ISSN|0194-7869] , and Cassaday's ability to interpret Ellis' scripts adds to the book's appeal, his command of the visual language helping drive the narrative.Fact|date=September 2007 The book is colored by Laura Martin, Tom Underhill noting her contribution as "every bit as compelling" as Cassaday's in his review for "" [cite journal | last =Underhill | first =Tom | year =2006 | month =February | title =Warren, Just Admit It | journal =The Comics Journal | volume =1 | issue =274 | pages =62–64 | id =ISSN|0194-7869] . The mysteries Mr. Ellis sets up are what ultimately drive the book, as the characters' relationships, their histories, and the identity of the Fourth Man [Comic book reference | Writer =Warren Ellis | Artist =John Cassaday | Story =Memory Cloud | Title =Planetary | Issue =12 | date = January 2001 | Publisher = ] are gradually revealed.

Mr. Ellis has also drawn on scientific sources for inspiration within the series to add an aspect of verisimilitude to his revisions of classic superheroes. He introduced the concept of a Multiverse to the shared universe in which the characters appear, drawing upon the mathematical concept known as the for inspiration [cite web| url =http://warren-ellis.livejournal.com/2678.html | title = [Mar. 27th, 2005|02:56 am] | accessdate =2006-11-10 | author =Warren Ellis | authorlink =Warren Ellis | date =2005-03-27 | format =html | work =Warren Ellis' Live Journal ] . Hark describes the multiverse as "a theoretical snowflake existing in 196,833 dimensional space." [Comic book reference | Writer =Warren Ellis | Artist =John Cassaday | Title =Planetary | Issue =2 | Date = April, 1999 | Publisher = DC Comics ] , a reference to the visualization method used by some mathematicians when describing the Monster group [Mathematicians have described the concept as best visualized as a highly symmetrical shape, a for example, existing in 196,883-dimensional space. Each symmetry of the group would correspond to a rotation of the object in this space, and the number of possible rotations is approximately equal to the number of atoms in the earth. This fact is also referred to by Hark in issue one.]

*"Planetary/The Authority: Ruling the World": Standalone story featuring the two Wildstorm teams in a plot tangentially related to an element in the first issue of "Planetary". Includes references to the stories of , and features Lovecraft himself as a character (in a very unflattering portrayal as a vehement racist.) Art by
*"": Standalone story featuring alternate renditions of in what is otherwise a straightforward "Planetary" tale. This story features various versions and interpretations of Batman spanning the character's history, ranging from 's original, to a version based on 's portrayal in the 1960s TV series, to Frank Miller's Dark Knight. Art by
*"": Standalone story featuring an alternate version of the JLA - Superman, Batman and Wonder Woman - facing an alternate incarnation of Planetary that acts in much the same way the Four do in the regular Planetary series. Completely detached from the main "Planetary" storyline. Art by