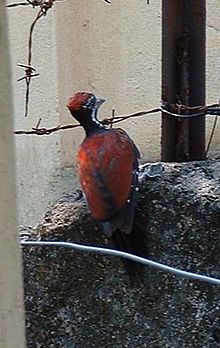 The Greater Flameback is a large woodpecker, at 33 cm in length. It is of typical woodpecker shape, has an erect crest and a long neck. Coloration is highly variable between subspecies; it always has unmarked golden-yellow to dark brown back and wings. The rump is red and the tail is black. The underparts are white with dark markings (chevrons, stripes, or bands), or light brown. The head is whitish with a black pattern, or it is yellow, brown or red. The straight pointed bill is long (longer than the head) and – like the legs and four-toed zygodactyl feet (two toes pointing forward, two backward) – lead-grey. The eyes' irides are whitish to yellow.[2]

The adult male Greater Flameback always has a red crown. Females have a crown color varying between subspecies, such as black spotted with white, yellow, or brown with lighter dots. Young birds are like the female, but duller, with brown irides.[2]

The Sri Lankan Crimson-backed Flameback has very dark and rufous wings and a dark hindneck. It is sometimes considered a Greater Flameback subspecies (C. l. stricklandi), sometimes separated as a distinct species.[3]

Head pattern of Western Ghats Greater Flameback (C. l. socialis). The thin and divided black "moustache" can be used to distinguish it from similar Dinopium flamebacks.

White-and-black-headed Greater Flameback subspecies resemble some of the three-toed Dinopium flamebacks, but are not particularly closely related. Unlike the Black-rumped Flameback (D. benghalense) and the Common Flameback (D. javanense), the Greater Flamebacks' dark moustache stripes are divided by white (making them inconspicuous at a distance); except in stricklandi, their hindneck is white (not black), and even in the Sri Lankan birds the dark colour does not extend to between the shoulders as it does in Dinopium; consequently, when seen from behind the black-and-white-headed Greater Flamebacks outside Sri Lanka show a white neck bordered with black on the sides, while the Dinopium species have a black neck and upper back, with thin white borders to the neck. Those flamebacks are also smaller (though this is only reliable in direct comparison), have a bill that is shorter than the head, and dark irides.[2]

Convergent evolution in plumage between a larger and a smaller species is also found among other woodpeckers, such as the North American Downy Woodpecker ("Picoides" pubescens) and Hairy Woodpecker ("P." villosus), the tropical American Smoky-brown Woodpecker ("P." fumigatus) and certain Veniliornis species, or the Striped Woodpecker (V. lignarius) and Checkered Woodpecker (V. mixtus) and some South American Piculus and "Picoides". In all of these cases, these birds are neither gregarious nor known to be bad-tasting, and due to their size difference and habitat preferences do not compete much; hence the usual reasons for mimicry do not seem to apply. While the similar plumage may be due to sheer chance – perhaps as an atavism of plesiomorphic patterns – the facts that such cases are commonplace in the Picinae and that the species involved are usually sympatric suggests that there may well be some as yet undiscovered benefit to either or all of the taxa involved.[4]

This flameback is a species associated with a diversity of rather open forest habitat, such as found in the foothills of the Himalayas or in the Western Ghats; it also inhabits mangrove forest. It seems to be well-adapted to particular forest types, while the similar-looking Common Flameback (Dinopium javanense) is more of a generalist; thus, depending on what forests predominate in a region, C. lucidus may be more (e.g. in Thailand) or less common (e.g. in peninsular Malaysia) than D. javanense. In Malaysian mangrove forest for example, the Greater Flameback has been found to prefer tall Avicennia alba for foraging, while the Common Flameback rather indiscriminately utilizes that species as well as Bruguiera parviflora and Sonneratia alba.[2]

Like other woodpeckers, the Greater Flameback uses its bill to dig out food from trees and its zygodactyl feet and stiff tail to provide support against tree trunks. The long tongue can be darted forward to extract wood-boring arthropod prey; while mainly feeding on small invertebrates, Greater Flamebacks will also drink nectar. They nest in tree holes, laying three or four white eggs.[5]

Widely distributed and quite common in parts of its range, the Greater Fireback is classified as a Species of Least Concern by the IUCN.[6]