Taree is a city on the Mid North Coast, New South Wales, Australia. Taree and nearby Cundletown were settled in 1831 by William Wynter.[2] Since then Taree has grown to a population of around 20,000 people and is the centre of a significant agricultural district. It is 16 km from the sea coast, and 317 km north of Sydney.[2] Taree can be reached by train via the North Coast Railway, and by the Pacific Highway.

Taree is within the Local Government Area of the City of Greater Taree, the state electorate of Myall Lakes and the Federal electorate of Lyne.

The name Taree is derived from "tareebit" the local native Biripi word meaning tree by the river, or more specifically, the Sandpaper Fig (Ficus coronata).[2] 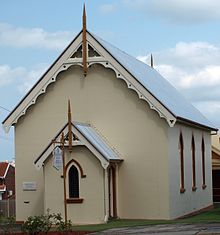 Taree was laid out as a private town in 1854 by Henry Flett, the son-in-law of William Wynter who had originally settled the area in 1831. 100 acres (0.40 km2) had been set aside for the private township and 40 lots were initially sold. Taree was declared a municipality on 26 March 1885 and the first municipal council was elected by the residents.[3] In 1844, the government of New South Wales had established Wingham at the head of navigation of the Manning River as its administrative centre which hindered Taree becoming the major centre of the region.[2] 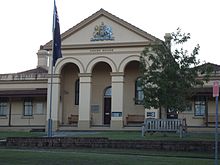 This changed, however, when the North Coast railway line was connected to Taree but not Wingham in 1913.[2] Although connected to the railway, sea transport continued to dominate along the North Coast until the 1930s and this acted as a brake on Taree's growth. This changed when the Martin Bridge replaced the ferry across the Manning River in 1940.[2]

The oldest surviving building in Taree is the old St Paul's Presbyterian Church, built in 1869 in the Victorian Gothic Revival style, next door to the current building, in Albert Street.[2] 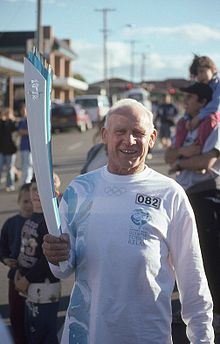 The Manning River Times [1] is based in Taree.

All major television channels are available in Taree. The networks and the channels they broadcast are listed as follows:

There are four local radio stations, commercial stations 2RE and Max FM and community stations 2BOB and 2TLP. 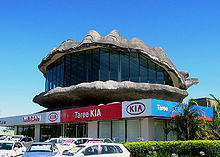 Nearby towns include historic Wingham, Tinonee, and the beachside town of Old Bar.

A local tourist attraction is a building called "The World's Largest Oyster", also called "The Big Oyster".[2] Big Things are a common form of tourist attraction in Australia. Like the Big Merino and Big Banana, the 'Oyster' is an artifact based on local produce; the Manning River produces some 3 and a half million oysters a year.[4] The Big Oyster was an unsuccessful business venture, known to the locals as a 'Big Mistake', and is now home to a motor dealership.

The Manning Entertainment Centre was built in the 1980s as the cultural centre of the district. Although it seats 500 people it is too small to accommodate large acts; for example the orchestra pit is not large enough for a full symphony orchestra. However a great variety of acts, including the District Eisteddfod and local amateur dramatic societies, utilise it to provide cultural outings for the local community.

Located next to the Entertainment Centre and the Visitor Information Centre at the northern entrance to Taree is the Manning Aquatic and Leisure Centre. This facility includes a 25 metre indoor heated pool with slippery dip and a 50 metre outdoor pool and soon after the time of opening had the second most expensive pool entrance fee in Australia, the most expensive being a pool in Perth, Western Australia. The Aquatic Centre was built in the late 1990s – early 2000s to replace the Taree Pool, which could no longer be used for swimming. Located next to the Manning River in the centre of town, the Taree Pool had fallen into disrepair and is now condemned.

The Manning Regional Art Gallery is located in a cottage style building next to Taree Public School. The art gallery hosts a changing selection of works by local artists and visiting exhibitions.

Events in the NSW Rowing Association Annual Pointscore Rowing Regatta are held at Endeavour Place in Taree during the third week of January. This Regatta consists of over 100 races with competitors travelling from many parts of New South Wales to compete.
The Manning River Summer Festival runs throughout the month of January, incorporating the town's New Year's celebrations, a "Family Fun Day" in Queen Elizabeth Park on Australia Day, and also vide variety of cultural events.

The Easter Powerboat Classic is held on the Manning River near Queen Elizabeth Park during the Easter Long Weekend. Events start on Friday morning and feature the Stuart Doyle Cup on Saturday and the Ken Warby time trials midday Saturday and Sunday.

The Taree Gold Cup is a prestigious horse racing event held at the Bushland Drive Racecourse.

The Taree Annual Show is held the second weekend in October. It consists of a sideshow, precision driving team, rodeo events, and cattle and livestock judging.

Taree railway station is on the North Coast Line of the CountryLink network. It is serviced by six CountryLink trains daily. Three heading to Sydney, another three heading North to Grafton, Casino or Brisbane.