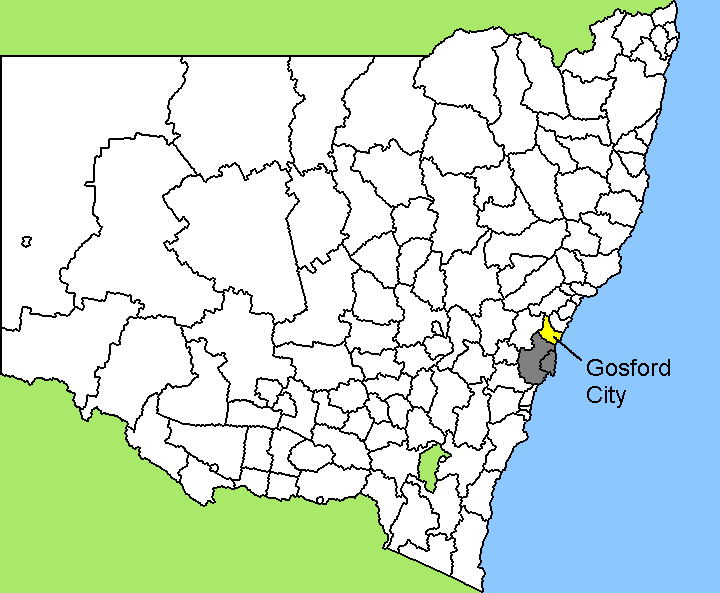 Gosford is a city located on the Central Coast of , , approximately 80km north of the . The city is situated at the northern extremity of , an extensive northern branch of the and . The city is the administrative centre of the Central Coast region, which is the third largest urban area in New South Wales after Sydney and Newcastle. Gosford is the 18th largest in Australia with a total resident population of 158,157.

Until European settlement, the area around Gosford was occupied by two groups of s, the and Darkinjung peoples, with the Guringai being principally coastal-dwellers and the Darkingung occupying land to the west. Fact|date=June 2008

Along with the other land around the Hawkesbury River estuary, the district was explored during the early stages of the settlement of Sydney. In the early 1800s some pioneering European settlers began occupying the land, for timber-cutting (mainly and Australian red cedar), lime production and . Fact|date=June 2008

Gosford itself was explored by between 1788 and 1789. The area was of difficult access and settlement did not start before 1823. By the late 1800s the agriculture in the region was diversifying, with s and citrus orchards occupying the rich soil left after the timber harvest. The first road between Hawkesbury, (near Pittwater) to Brisbane Water was only a cart wheel track even in 1850. [ [http://www.gosford-p.schools.nsw.edu.au/about/gosfordhistory.htm History of Gosford ] ]

once lived and worked in the Gosford area. In 1825, Gosford's population reached 100, of which 50% were convicts.

East Gosford was the first centre of settlement. Gosford was named in 1839 after - a friend of the then Governor . Fact|date=March 2008

In 1887, the rail link to Sydney was completed, requiring a bridge over the Hawkesbury River and a tunnel through the sandstone ridge west of Woy Woy. The introduction of this transport link, and then the Pacific Highway in 1930 accelerated the development of the region.

Gosford became a town in 1885 and was declared a municipality in 1886. [ [http://www.centralcoastaustralia.com.au/AreaInfo/towns_Gosford.asp Gosford - Central Coast Australia ] ]

Gosford proper is located in a valley with President's Hill on the city's western border and Rumbalara Reserve on its eastern border, and Brisbane water to the city's south. Mann Street, Gosford's main street and part of the Pacific Highway, runs north-south contains the frontage for much of its commercial district. The runs past Gosford's waterfront area, while its predecessor the Pacific Highway takes on several names through the CBD itself. Mann Street contains the main public transport links for Gosford, with Gosford railway station ( and ) and the termini for several bus routes.

More recently, the Gosford CBD has suffered a decline as more commercial activity has relocated to nearby , particularly .Fact|date=March 2008 To address this, there have been proposals to revitalise the city centre by more adequately connecting it to the waterfront, and provide more employment and entertainment areas. Fact|date=March 2008However, there has been little concerted effort at State or Local Government level. POV-statement|date=March 2008