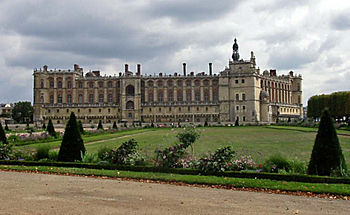 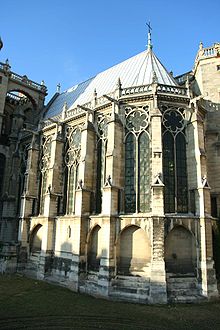 The Château de Saint-Germain-en-Laye (French pronunciation: [ʃɑto də sɛ̃ ʒɛʁmɛ̃ ɑ̃ lɛ]) is a royal palace in the commune of Saint-Germain-en-Laye, in the département of Yvelines, about 19 km west of Paris, France. Today, it houses the Musée d'Archéologie Nationale (Museum of National Archaeology).

The first castle, named the Grand Châtelet, was built on the site by Louis VI in around 1122. The castle was expanded by Louis IX of France in the 1230s.

Louis IX's chapelle Saint Louis at the castle belongs to the Rayonnant phase of French Gothic architecture. A 1238 charter of Louis IX instituting a regular religious service at the chapel that we first learn of a chapel having been built at the royal castle. This was a Sainte Chapelle, to house a relic of the Crown of Thorns or the True Cross. Its plan and architecture prefigure the major Sainte-Chapelle which Saint Louis built within the Palais de la Cité at Paris between 1240 and 1248. Both buildings were built by Louis's favourite architect Pierre de Montreuil, who adapted the architectural formulae invented at Saint Germain for use in Paris. A single nave ends in a chevet, with almost all the wall areas filled by tall thin glass windows, between which are large exterior buttresses. The ogives of the vault rest on columns between the bays and the column bases are placed behind a low isolated arcade. The building can thus be open and empty of all internal supports. This large number of windows is also enabled by the pierre armée technique, with metal elements built into the structure of the walls to ensure the stones' stability. The west wall is adorned by a large Gothic rose window in the "rayonnant" Gothic style. It was in this chapel in 1238 that Baldwin II of Constantinople presented Louis with the relic of the crown of thorns and, though they were intended for the Sainte-Chapelle in Paris, they were housed here until the Paris chapel was consecrated in April 1248.

The castle was burned by the Black Prince in 1346; of it, and only the Gothic chapel remains from the site's medieval phase. This Château Vieux was rebuilt by King Charles V in the 1360s on the old foundations.

The oldest parts of the current château were reconstructed by Francis I in 1539, and have subsequently been expanded several times. On 10 July 1547 a political rivalry came to a head in a bloody game here. Against the odds, Guy Chabot, 7th baron de Jarnac triumphed over François de Vivonne, seigneur de la Chasteigneraie, giving rise to the coup de Jarnac. 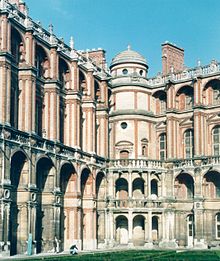 Staircase tower in the corner of the court
Main article: Chateau-Neuf de Saint-Germain-en-Laye

Henry II built a separate new château (le Château Neuf) nearby, to designs by Philibert de l'Orme, sited at the crest of a slope, which was shaped, under the direction of Étienne du Pérac (Karling 1974 p 10) into three massive descending terraces and narrower subsidiary mediating terraces, which were linked by divided symmetrical stairs and ramps and extended a single axis that finished at the edge of the Seine; the design took many cues from the Villa Lante at Bagnaia.[1] "Étienne du Pérac had spent a long time in Italy, and one manifestation of his interest in gardens of this type is his well-known view of the Villa d'Este, engraved in 1573" (Karling 1974, p 11). 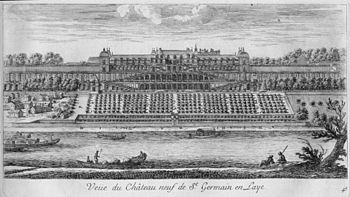 The gardens laid out at Saint-Germain-en-Laye were among a half-dozen gardens introducing the Italian garden style to France that laid the groundwork for the French formal garden. Unlike the parterres that were laid out in casual relation to existing châteaux, often on difficult sites originally selected for defensive reasons,[2] these new gardens extended the central axis of a symmetrical building façade in rigorously symmetrical axial designs of patterned parterres, gravel walks, fountains and basins, and formally-planted bosquets; they began the tradition that reached its apex after 1650 in the gardens of André Le Nôtre.[3] According to Claude Mollet's Théâtre des plans et jardinage[4] the parterres were laid out in 1595 for Henry IV by Mollet, trained at Anet and the progenitor of a dynasty of royal gardeners. One of the parterre designs by Mollet at Saint-Germain-en-Laye was illustrated in Olivier de Serres' Le théâtre d'agriculture et mesnage des champs (1600), but the Château Neuf and the whole of its spectacular series of terraces can be fully seen in an engraving after Alexandre Francini, 1614.[5]

Silvestre's view of the uppermost terrace of the Château Neuf, shows (with artistic license) its neglected state.

Louis XIV was born at Saint-Germain-en-Laye in 1638. One of du Pérac's retaining walls collapsed in 1660, and Louis undertook a renovation of the gardens in 1662. At his majority he established his court here in 1666, but it was the Château Vieux that he preferred: the Château Neuf was abandoned in the 1660s and demolished. From 1663 until 1682, when the king removed definitively to Versailles, the team that he inherited from the unfortunate Fouquet — Louis Le Vau, Jules Hardouin-Mansart and André Le Nôtre laboured to give the ancient pile a more suitable aspect.

The gardens were remade by André Le Nôtre from 1669 to 1673, and include a 2.4 kilometre long stone terrace which provides a view over the valley of the Seine and, in the distance, Paris.

The Château is at the centre of the town of Saint-Germain-en-Laye, close by its RER A railway station.

In the 19th century, Napoleon I established his cavalry officers' training school here. Napoleon III had the castle restored by Eugène Millet from 1862, and it became the Musée des Antiquités Nationales (Museum of National Antiquities) in 1867, displaying the archeological objects of France.

On September 10, 1919 the Treaty of Saint-Germain-en-Laye, ending hostilities between the Allies of World War I and Austria, was signed at the château.[6]

During the German occupation (1940–44), the château served as the headquarters of the German Army in France.

The museum was renamed the Musée d'Archéologie Nationale in 2005.[7] Its collections include finds from Paleolithic to Merovingian times.