An ogive (pronounced /ˈoʊdʒaɪv/ oh-jyv) is the roundly tapered end of a two-dimensional or three-dimensional object.

In ballistics or aerodynamics, an ogive is a pointed, curved surface mainly used to form the approximately streamlined nose of a bullet or other projectile.

The traditional or secant ogive is a surface of revolution of the same curve that forms a Gothic arch; that is, a circular arc, of greater radius than the diameter of the cylindrical section ("shank"), is drawn from the edge of the shank until it intercepts the axis.

If this arc is drawn so that it meets the shank at zero angle (that is, the distance of the centre of the arc from the axis, plus the radius of the shank, equals the radius of the arc), then it is called a tangential or spitzer ogive. This is a very common ogive for high velocity (supersonic) rifle bullets.

The sharpness of this ogive is expressed by the ratio of its radius to the diameter of the cylinder; a value of one half being a hemispherical dome, and larger values being progressively more pointed. Values of 4 to 10 are commonly used in rifles, with 6 being the most common.

The ogive shape of the Space Shuttle External Tank 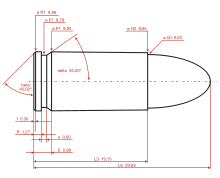 Ogive on a 9mm cartridge

Another common ogive for bullets is the elliptical ogive. This is a curve very similar to the spitzer ogive, except that the circular arc is replaced by an ellipse defined in such a way that it meets the axis at exactly 90°. This gives a somewhat rounded nose regardless of the sharpness ratio. An elliptical ogive is normally described in terms of the ratio of the length of the ogive to the diameter of the shank. A ratio of one half would be, once again, a hemisphere. Values close to 1 are common in practice. Elliptical ogives are mainly used in pistol bullets.

Missiles and aircraft generally have much more complex ogives, such as the von Kármán ogive. 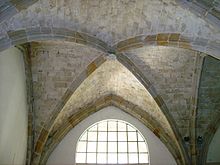 One of the defining characteristics of Gothic architecture is the pointed or ogival arch. Arches of this type were used in the Near East in pre-Islamic[1] as well as Islamic architecture before they were structurally employed in medieval architecture, and are thus thought to have been the inspiration for their use in France, as at Autun Cathedral, which is otherwise stylistically Romanesque.[2]

In Gothic architecture, ogives are the intersecting transverse ribs of arches that establish the surface of a Gothic vault. An ogive or ogival arch is a pointed, "Gothic" arch, drawn with compasses as outlined above, or with arcs of an ellipse as described. A very narrow, steeply pointed ogive arch (like the one in the construction above) is sometimes called a "lancet arch." The most common form is an equilateral arch, where the radius is the same as the width. In the later Flamboyant Gothic style, an "ogee arch," an arch delineating a void with a pointed head, like S-shaped curves, became prevalent.

Villard de Honnecourt, a 13th century itinerant master-builder from the Picardy in the north of France, was the first writer to use the word ogive. The OED considers the French term's origin obscure; it might come from the Late Latin obviata, the feminine perfect passive participle of obviare, to resist, i.e. the arches resisting the downward force of the structure's mass.

In woodworking, an ogive is a type of curve a piece of wood can be shaped in. See also: ogee

In statistics, an ogive is a graph showing the curve of a cumulative distribution function[3] (which, for the normal distribution, resembles one side of an Arabesque or ogival arch).

In glaciology, ogives are three dimensional wave-bulges characteristic of glaciers that have experienced extreme underlying topographical change, observed as an ice fall. Forbes bands are light and dark bands that appear down glacier ogives, resulting from different ice densities due to the seasons.