Miss Havisham is a significant character in the Charles Dickens novel Great Expectations (1861). She is a wealthy spinster, who lives in her ruined mansion with her adopted daughter, Estella, whom she has sent to France, while she herself is described as looking like "the witch of the place."

Although she has often been portrayed in film versions as very elderly, Dickens's own notes indicate that she is only in her mid-fifties. However, it is also indicated that her long life away from the sunlight has in itself aged her, and she is said to look like a cross between a waxwork and a skeleton, with moving eyes.

Miss Havisham's mother died when her daughter was a baby. Her father, a wealthy brewer, spoiled their daughter as a result. When he died, he left most of his money as inheritance for her.

As an adult, she fell in love with a man named Compeyson, who was only out to swindle her of her riches. Her cousin Matthew Pocket warned her to be careful, but she was too much in love to listen. At twenty minutes to nine on their wedding day, while she was dressing, Havisham received a letter from Compeyson and realized that he had defrauded her and she had been left at the altar. 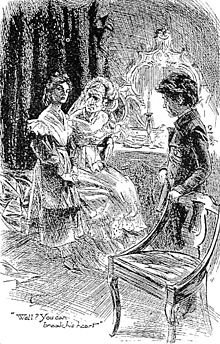 Humiliated and heartbroken, Havisham had all the clocks stopped at the exact point in which she had learned of her betrayal. From that day on, she remained by herself in her decaying mansion, Satis House, never removing her wedding dress (as a result of being in the process of getting dressed when she receives the letter, she only has one shoe on), leaving the wedding cake uneaten on the table and only allowing a few people to see her.

Miss Havisham later had her lawyer, Mr. Jaggers, adopt a daughter for her.

I had been shut up in these rooms a long time (I don't know how long; you know what time the clocks keep here), when I told him that I wanted a little girl to rear and love, and save from my fate. I had first seen him when I sent for him to lay this place waste for me; having read of him in the newspapers, before I and the world parted. He told me that he would look about him for such an orphan child. One night he brought her here asleep, and I called her Estella.

From protection to revenge

While wishing Estella to never suffer as she had at the hands of a man was Miss Havisham's original goal, it changed as Estella grew older:

Believe this: when she first came, I meant to save her from misery like my own. At first I meant no more. But as she grew, and promised to be very beautiful, I gradually did worse, and with my praises, and with my jewels, and with my teachings, and with this figure of myself always before her a warning to back and point my lessons, I stole her heart away and put ice in its place.

While Estella was still a child, Miss Havisham began casting about for boys who could be a testing ground for Estella's education in breaking the hearts of men as vicarious revenge for Miss Havisham's pain. Pip, the narrator, is the eventual victim, and Miss Havisham readily dresses Estella in jewels to prettify her all the more, and to exemplify all the more the vast social gulf between her and Pip. It is this that drives Pip to ultimately agree to become a gentleman, and when, as a young adult, Estella leaves for France to receive education, Miss Havisham eagerly asks him, "Do you feel you have lost her?" 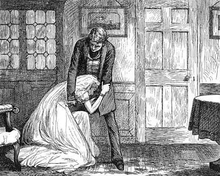 Miss Havisham is begging Pip for his forgiveness. Art by F.A. Fraser.

Miss Havisham is repentant late in the novel when Estella leaves to marry Pip's rival, Bentley Drummle, and she realises that she has caused Pip’s heart to be broken in the same manner as her own; rather than achieving any kind of personal revenge, she has only caused more pain. Miss Havisham begs Pip for forgiveness.

Until you spoke to [Estella] the other day, and until I saw in you a looking-glass that showed me what I once felt myself, I did not know what I had done. What have I done! What have I done!

After Pip leaves, Miss Havisham's dress catches on fire from her fireplace. Pip rushes back in and saves her. However, she has suffered severe burns to the front of her torso (she is laid on her back), up to the throat. The last words she speaks in the novel are (in a delirium) to Pip, referencing both Estella and a note she, Miss Havisham, has given him with her signature: "Take the pencil and write under my name, 'I forgive her!'"

A surgeon dresses her burns, and says that they are "far from hopeless". However, despite rallying for a time, she dies a few weeks later, leaving Estella as her chief beneficiary, and a considerable sum to Herbert Pocket, as a result of Pip's reference.

Eliza Emily Donnithorne (1827–1886) of Camperdown, Sydney, was jilted by her groom - who had the surname "Cuthbertson" - on her wedding day in 1846 and spent the rest of her life in a darkened house, her rotting wedding cake left as it was on the table, and with her front door kept permanently ajar in case her groom ever returned (although he died in 1852). She was widely considered at the time to be Dickens' model for Miss Havisham, although this cannot be proven.[1][2] Although Charles Dickens had a deep-seated interest in Australia, saw it as a place of opportunity and encouraged two of his sons to emigrate there, the writer never visited it himself, but it features in detail in many of his works, notably Great Expectations itself. He obtained his information on colonial life in New South Wales from two Sydney researchers. He also had numerous friends and acquaintances who settled in Australia who sent him letters detailing curious aspects of life in the colonies, knowing he could use it as source material for future novels. They could easily have conveyed the Donnithorne story to him. Australia features prominently in Great Expectations, and New South Wales is where Pip’s benefactor Abel Magwich made his fortune.

In the 1965 Penguin edition, Angus Calder notes at Chapter 8 that "James Payn, a minor novelist, claimed to have given Dickens the idea for Miss Havisham - from a living original of his acquaintance. He declared that Dickens's account was 'not one whit exaggerated'." Although it is documented Dickens encountered a wealthy recluse called Elizabeth Parker on whom it is widely believed he based the character, whilst staying in Newport, Shropshire at the aptly named Havisham court.

It's also claimed that Emily Morgan of Guildford, Surrey was the inspiration for Miss Havisham.

Miss Havisham's Fire (1979, revised 2001) is an opera composed by Dominick Argento with a libretto by John Olon-Scrymgeour, based on Dickens' character. The entire story is told in flashback during an inquiry into Miss Havisham’s death.

Use in the Thursday Next series

Dickens's Miss Havisham is a major character in the comic detective/mystery series of novels, Thursday Next by Jasper Fforde. The stories are set in a fantasy/alternate universe milieu in which characters borrowed from classic literature, including the Dickens, play a prominent role.

In Fforde's world, Mrs Havisham, now a great fan of fast cars, is one of the leading operatives of Jurisfiction, the organisation that polices the world in which all fiction resides, the BookWorld. Her capabilities are portrayed as very advanced, she takes Thursday on as an Apprentice, and one of their first assignments together is to circumvent a plot hole in Great Expectations as it is never explained in Dickens's novel how the heavily-manacled Magwitch was able to make it to land from the prison ship where he was incarcerated.

Also, in the series, Miss Havisham dies as a result of a car crash, rather than being set alight. To make this fit in, the ending familiar to readers in this world is improvised, changing the plot to say her dress caught fire. This is similar to the plot of The Eyre Affair, the first story in the Thursday Next series where the ending of the story is changed to the familiar one.

In film adaptations of Great Expectations, Miss Havisham has been played by a number of distinguished actresses, including:

Both Sunset Boulevard and What Ever Happened to Baby Jane? were inspired by David Lean's adaptation of Great Expectations, as were, by extension, the characters of Norma Desmond and Baby Jane Hudson and their homes.[3] In Sunset Boulevard, Joe Gillis even compares Norma Desmond to Havisham during his narration.

A character in the cartoon show Chowder, Endive, has had a similar event to Havisham when her fiancé never showed up on the wedding day. She also has an apprentice, Panini, whom she teaches to avoid men.

The condition of "The Miss Havisham effect" has been coined by scientists to describe a person who suffers a painful longing for lost love, which can become a physically addictive pleasure by activation of reward and pleasure centers in the brain, which have been identified to regulate addictive behavior - regions commonly known to be responsible for craving and drug, alcohol and gambling addiction.[4]