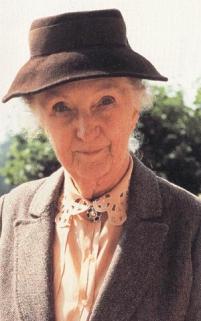 Joan Hickson OBE ( &ndash; ) was an English actress of , and , who achieved fame in her old age playing 's in the television series of the same name.

Born in , Northampton, she made her stage debut in 1927, and for several years worked throughout the and achieved success playing comedic, often eccentric characters in 's West End, including the role of the cockney maid Ida in the original production of "", at the in 1944, and then at the in January 1945.

She made her first film appearance in 1934, and the numerous supporting roles of her career included several including Sister in ; in a wonderfully comedic moment, her character in discovers that someone has played a practical joke on her, waving her underwear from a flagpole. Joan then approaches Jack Douglas, and, with impeccable timing, informs him : "Young man! I want you to take my drawers down!"

She also played the housekeeper in the Marple film "" (1961), which starred as Miss Marple (based on Agatha Christie's original novel "4.50 From Paddington" - the novel was known in America as "What Mrs McGillicuddy Saw!"). From 1970 to 1971, she played Mrs Pugsley in "Bachelor Father". In 1986, she played the part of a talkative old lady called Mrs Trellis in "Clockwise".

In 1980 she appeared in yet another Agatha Christie production, as Mrs. Rivington in "".

The began filming the works of Agatha Christie in the early 1980s, and were conscious of the criticism that had been levelled at the most famous portrayal of Miss Marple given by . Though admired, Rutherford's Marple bore little resemblance to the character as written, and the plots of the early Christie film versions varied sharply from the author's carefully constructed plotlines.

In making a new series, the makers determined to remain faithful to the plotlines and locales of Christie's stories, and most importantly to represent Miss Marple as written. Hickson played the role in all 12 adaptations of the novels produced from 1984 to 1992, and received two nomination and an OBE. Queen Elizabeth II bestowed the award and was delighted to do so, telling Joan that, as an ardent fan of Miss Marple, "You play the part just as one envisages it." The Queen has always been a fan of Agatha Christie - she invited the writer to dine at in about 1954, and Christie said it was one of the most exciting things that had ever happened to her [Christie, Agatha. "An Autobiography" (Page 321). Collins, 1977. ISBN 0-00-216012-9] .

As well as portraying Miss Marple on television, Hickson also narrated a number of "Miss Marple" stories on audio books.

Hickson died in of natural causes at the age of 92.

The actor Tony Hickson is a distant relation.

*
*
* [http://www.bris.ac.uk/theatrecollection/search/people_sub_plays?forename=Joan&surname=HICKSON&job=Actor&pid=11987&image_view=Yes&x=19&y=17 Performances by Joan Hickson in the Archive of the University of Bristol]