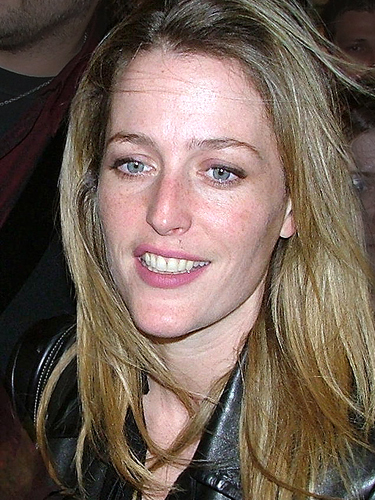 Gillian Leigh Anderson (born , ) is an American , best known for her roles as in the American TV series "" and Lady Dedlock in the TV series "Bleak House". She currently hosts "Masterpiece" on PBS.

Anderson was born in , , , the daughter of Rosemary Anderson, a computer analyst, and Edward Anderson, who owned a film post-production company. [ [http://www.filmreference.com/film/1/Gillian-Anderson.html Gillian Anderson Biography (1968-) ] ] Soon after her birth, her family moved to for 15 months and then to where she attended and finally [ [http://www.gilliananderson.ws/transcripts/96_97/97melody.shtml The Official Gillian Anderson Website] ] in , so that her father could attend the . When Anderson was 11 years old, her family moved again, this time to . She attended Fountain Elementary and then , a program for gifted students with a strong emphasis on the ; she graduated in 1986.

With her English accent and background, Anderson was mocked and felt out of place in the American Midwest and soon adopted a Midwest one. In addition, she had her nose pierced in the early 1980s and dyed her hair various colors. Her high school classmates voted her as "Most Bizarre," "Class Clown", "Most Likely to go Bald" and "Most Likely to be Arrested." Anderson was also caught trying to jam the high school doors by filling their locks with glue on the eve of her graduation. [cite web | url=http://www.gilliananderson.ws/transcripts/96_97/9710us.shtml | title=Gillian Anderson Uncensored | author=Margy Rochlin | date=October 1997 | publisher=US magazine | accessdate=2006-10-04]

Anderson found an outlet for her energy when she began acting in high school and community theater productions, even serving as a student intern at the Grand Rapids Civic Theatre. She had wanted to be a marine biologist, but began acting instead at 17, with a few roles in various community theatre productions. Anderson attended The Theatre School at in Chicago (formerly the Goodman School of Drama), where she earned a in 1990. She also participated in the 's summer program at Cornell University.

Anderson moved to when she was 22 years old. She began her career in Alan Ayckbourn's play, "Absent Friends", at the Manhattan Theatre Club in which Anderson played alongside ; she won the 1990-91 Theatre World "Newcomer" Award for her role. Her next theatrical role was in 's "The Philanthropist" at the in . To support herself when she started her career, Anderson worked as a waitress.

Anderson moved to in 1992, spending a year auditioning. Although she had once vowed she would never do TV, being out of work for a year changed her mind. Anderson did "Home Fires Burning" for a cable station, as well as the version of "". She broke into mainstream television in 1993, with a guest appearance on the collegiate drama, "", on the fledgling Fox Network.

As a result of her guest appearance in "Class of 96", Anderson was sent the script for "The X Files" at the age of 24. She decided to audition because "for the first time in a long time, the script involved a strong, independent, intelligent woman as a lead character." Producer Chris Carter wanted to employ her, but Fox wanted someone with previous TV exposure and greater sex appeal. [cite web | url=http://www.gilliananderson.ws/about/bio1.shtml | title=The Official Gillian Anderson Website - About Gillian - Biography | work=gilliananderson.ws | accessdate=2006-10-04] Fox sent in more actresses, but Carter stood by Anderson, and she was eventually cast as Special Agent Dana Scully. Anderson got the part assuming it would run for 13 episodes, the standard minimum order for American TV networks. Filmed in and then in , the series would run for nine seasons, and included two films, released in 1998 and 2008. During her time on "The X Files", Anderson won several awards for her portrayal of Special Agent Scully, including an , and two awards for "Best Actress in a Drama Series." While filming, Anderson met assistant art director Clyde Klotz, whom she would eventually marry.

Anderson is the youngest actress - at the age of 29 years old in 1997 - to win Outstanding Lead Actress in a Primetime Drama Series Emmy Award since Lindsay Wagner won at the age of 28 in 1977.

Anderson had roles in a handful of films during the run of "The X-Files" and starred in "", an adaptation of the novel of the same name.

In 1999, Anderson had a supporting role in the English-language release of 's "", where she voiced the character of Moro. Anderson is a proclaimed lover of Miyazaki's work. She also took part in 's "".

When "The X-Files" ended, Anderson performed in several stage productions and worked on various film projects. She has participated in narrative work for documentaries on scientific topics. In 2005, she appeared as Lady Dedlock in the television adaptation of Charles Dickens' novel "", had a starring role in the Irish film "" (for which she won an IFTA award for Best International Actress) and performed in "", a film version of the novel "".

In December 2007, it was announced that Anderson will host PBS' "" during the Jane Austen series.

* On New Year's Day 1994, Anderson married , "The X-Files" series assistant art director, on the 17th hole of a golf course in as part of a ceremony. A few months later came the news that she was pregnant. "The X-Files" creator, Chris Carter, created an alien abduction storyline that kept Anderson off-camera long enough for labor, delivery and a 10-day maternity leave. Daughter Piper Maru (for whom "The X-Files" episode, "Piper Maru," was named) was born on September 25, 1994, in , . Carter was named her godfather. In the year of 2000, Piper had a small (and uncredited) appearance in "" movie of her mother. Anderson and Klotz divorced in 1997.

* "The X-Files" finished its ninth and final season in May 2002, marking the end of a major period in Anderson's life - she started the show when she was 24 and finished it when she was 34. She later moved to London. From November 2002 through February 9, 2003, she starred in the play, "What the Night is For", in London's West End.

* In December 2004, Anderson married Julian Ozanne, a documentary filmmaker, in the village of Shella on Lamu, an island off the coast of . Anderson and Ozanne announced their separation on , , after 16 months of marriage. [cite web | url=http://www.dailymail.co.uk/pages/live/articles/showbiz/showbiznews.html?in_article_id=383845&in_page_id=1773 | title=X Files star now to become X-wife | date=, | publisher=Daily Mail | accessdate=2006-10-04]

* Anderson provides and charitable assistance in the support of finding a cure for . She serves as NF, Inc.'s Honorary Spokesperson and is a Patron of the Neurofibromatosis Association (based in the UK). Her support stems from her brother being diagnosed with NF-1. [cite web | url=http://www.gilliananderson.ws/charities/nf.shtml | title=The Official Gillian Anderson Website - Charities | work=gilliananderson.ws | accessdate=2006-10-04] She is also a member of the board of directors for Artists for a New South Africa and a campaigner for [http://www.actsa.org Action for Southern Africa] . Furthermore, Anderson is a an active member of PETA, supporting animal rights. [cite web | url=http://peta.org/feat/gillian/ | title=Turkey Passes Its First Comprehensive Animal-Protection Law | work=peta.org | accessdate=2006-10-04 ] [cite web | url=http://www.happycow.net/famous/gillian_anderson/ | title=List of Famous Vegetarians | accessdate=2008-04-29 ]

* Wrote and directed the "X-Files" episode ""
* Compiled a collection of music inspired by , entitled Future: A Journey Through The Electronic Underground. Contributed vocals to one track, Extremis, with music by HAL.
* Provided the voice for the ship's computer in the 1996 video game Hellbender by and .
* Appeared in 2 X-Files games, and provided her voice and likeness for .