Mansion
For the Chinese astronomical use, see Twenty-eight mansions.

For the kind of video game with the name "Mansion", see Luigi's Mansion. 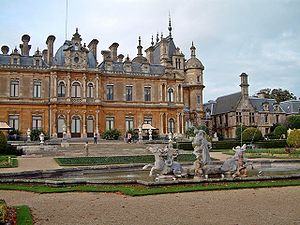 Waddesdon Manor, one of the many mansions of the Rothschild family

A mansion is a very large dwelling house. U.S. real estate brokers define a mansion as a dwelling of over 8,000 square feet (740 m2). A traditional European mansion was defined as a house which contained a ballroom and tens of bedrooms. Today, however, there is no formal definition beyond being a large and well-appointed house.[1]

The word itself derives (through Old French) from the Latin word mansiō ("act of remaining or staying", a verbal noun from manere "to remain" or "to stay".) In the Roman Empire, a mansio was an official stopping place on a Roman road, or via, where cities sprang up, and where the villas of provincial officials came to be placed. The Scots word "manse" originally defined a property large enough for the Minister of the parish to maintain himself, but a mansion is no longer self-sustaining in this way (compare a Roman or medieval villa). 'Manor' comes from the same root — territorial holdings granted to a lord who would remain there — hence it can be seen how the word 'Mansion' came to have its meaning. 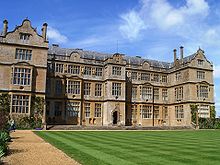 The "country house," as it is known in English-speaking places, is a distinct variety of mansion.

In the past, it was fashionable for the elite society of Europe to pursue the social circuit from country home to country home, with intervals at town homes, so unfortified country houses supplanted castles and the modern mansion began to evolve.

It was in the 16th century that mansions really began to be built in a completely unfortified and gracious style[citation needed], with gardens, parks, and drives. This was the era of Renaissance architecture. Hatfield House is a superb example of a house built during the transition period in England[citation needed]. In Italy, classic villas such as Villa Farnese and Villa Giulia were typical[citation needed], albeit individually diverse forms, of the new style of mansion.

The uses of these edifices paralleled that of the Roman villas. It was vital for powerful people and families to keep in social contact with each other as they were the primary moulders of society. The rounds of visits and entertainments were an essential part of the societal process, as painted in the novels of Jane Austen. State business was often discussed and determined in informal settings. Times of revolution reversed this value. During its revolution, France lost a large part of its country homes to incendiary committees, who destroyed the estates as a reaction to/rejection of the ancient régimes.

Until World War I it was not unusual for a moderately sized mansion in England such as Cliveden to have an indoor staff of 20 and an outside staff of the same size[citation needed], and in ducal mansions such as Chatsworth House the numbers could be far higher. In the great houses of Italy, the number of retainers was often even greater than in England; whole families plus extended relations would often inhabit warrens of rooms in basements and attics. It is doubtful that a 19th century Marchesa would even know the exact number of individuals who served her. Most European mansions also were the hub of vast estates. A true estate (the medieval villa, French ville) always contains at least one complete village and its church. Large estates such as that of Woburn Abbey have several villages attached. 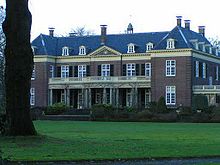 A mansion near Almelo, Netherlands

The 19th century saw particularly in the United States a new type of mansion being built, often smaller than the older European mansions. The Breakers in Rhode Island is a fine example, as is the nearby, but completely different, Watts Sherman House.

Fifth Avenue, New York, at this time was lined with numerous mansions, designed by the leading architects of the day, many in European gothic styles, built by the many families who were making their fortunes, and thus achieving their social aspirations, in the mid 19th century. However, nearly all of these have now been demolished, thus depriving New York of a boulevard to rival, in the architectural sense, any in Paris, London or Rome—where the many large mansions and palazzi built or remodeled during this era still survive. Mansions built in the countryside were not spared either. One of the most spectacular estates of the U.S., Whitemarsh Hall, was demolished in 1980, along with its extensive gardens, to make way for suburban developments.

Grand Federal Style mansions designed by Samuel McIntire inhabit an area that, in 2008, is the largest collection of 17th & 18th century structures in the United States of America. This district in Salem, Massachusetts is called the McIntire Historic District with the center being Chestnut Street.[2]

Little is known about McIntire's personal life. He was born in Salem in 1757 and grew up in a family of housewrights. Samuel married Sally Fields in 1778, and the couple had one son. He built a simple home and workshop on Summer Street in 1786. His favorite hobby was playing and teaching music.

McIntire's training came from his father and from books. He and his brothers, Joseph and Angler, began their careers as housewrights and carpenters while in their teens but, early on, Samuel's work caught the eye of Salem's pre-eminent merchant, Elias Hasket Derby. Over the next quarter century, McIntire built or remodeled a number of homes for Derby and members of his extended family. McIntire also worked occasionally on Derby's vessels, and wasn't averse to fixing a wagon or building a birdhouse if his patron so desired.[3]

"King" Derby's stamp of approval opened many other doors for McIntire, who went on to design and build mansions for John Gardner, Jerethmiel Peirce, Simon Forrester, and other wealthy Salem shipowners. He also built, on elegant Chestnut Street, a function hall (named for Alexander Hamilton) and church for the town's merchant class. McIntire also designed the former Salem Court House and Registry of Deeds.

After 1793, Samuel McIntire worked exclusively in the architectural style developed by Robert Adam in Great Britain and brought to America by the great Boston architect, Charles Bulfinch. The delicate Adamesque style, which emphasized decorative elements and ornamentation, was tailor made for McIntire whose unerring sense of design and proportion was exceeded only by his skill as a woodcarver. Carved swags, rosettes, garlands, and his signature sheaths of wheat dominate wood surfaces in McIntire homes built between 1793 and his death in 1811.

The Breakers, in Newport, Rhode Island, is one of the most famous 19th century mansions in the United States.

Even in Europe some 19th-century mansions were often built as replicas of older houses, the Château de Ferrières in France was inspired by Mentmore Towers which in turn is a copy of Wollaton Hall. Other mansions were built in the new and innovative styles of the new era such as the arts and crafts style: The Breakers is a pastiche of an Italian Renaissance Palazzo; Waddesdon Manor in Buckinghamshire is a faithful mixture of various French châteaux. One of the most enduring and most frequently copied styles for a mansion is the palladian - particularly so in the 18th century. However, the gothic style was probably the most popular choice of design in the 19th century. The most bizarre example of this was probably Fonthill Abbey which actually set out to imitate the mansions which had truly evolved from medieval gothic abbeys following the Dissolution of the Monasteries in the 16th century.

Mansions built during and after the 19th century seldom were supported by the large estates of their predecessors. These new mansions were often built as the week-end retreats of businessmen who commuted to their offices by the new railways, which enabled them to leave the city more easily[citation needed]. Before this era most owners of mansions were the old aristocracy[citation needed]. 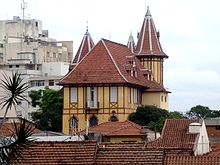 In Latin America, with its feudal colonial and post-colonial past, the grand rural estate, the Hacienda, Estancia, in Portuguese speaking Brazil Fazenda or Estância, with the mansion as its stately center, is a characteristic feature.

Naturally mansions followed European architectural styles. Whereas until the second half of the 19th century Portugal and Spain as the colonial (or former colonial) powers were the eminent models for architecture and upperclass lifestyle, towards the end of the 19th century they were sometimes replaced by then more dominant powers like France or England.

In comparably developed, densely populated countries like Mexico, feudal estates and their mansions were as grand and stately as in the Mediterranean old world, whereas where estates were founded in the sparsely populated remote areas like the Pampa of Argentina or Uruguay, where iron pillars, doors, windows, furniture had to be brought from Europe by ship and afterwards oxcart, buildings were smaller, but normally still aspiring to evoke a stately impression, often featuring the Mirador (the lookout or tower, see also belvedere) In Venezuela, the traditional Spanish Mansion with the garden in the center of the property are usually referred as "Quinta".

Mansions built during the last and present centuries usually have specially designed rooms meant to accommodate leisure activities of a particular kind. Many will have a conservatory or greenhouse, while others will have an infinity pool or a home theatre. Some have all of these features. The relative importance of these specially designed rooms changes with the times: At the beginning of the 20th century no true mansion would have been built without a room to house a private library or office, while at the beginning of the 21st century the presence of a room designed for a home theatre or cinema is a must. Most recently, mansions have been built with integrated domotics.

A modern mansion today may not necessarily be limited to a single house standing alone. Compounds, or a grouping of larger houses have become more popular. The Kennedy Compound is an example of one family building surrounded by large houses on a single plot. There is no single accepted size where a big house would instead be called a "mansion". As the word itself derives from the Latin word mansiō ("act of remaining or staying"), many city villas suitable for receiving guests are operated as bed and breakfasts, like Valencia Mansion in Spain.