Motoring taxation in the United Kingdom

Motoring taxation in the United Kingdom

Motoring taxation in the United Kingdom comes in a variety of forms. There are fuel taxes, motor vehicle ownership and use taxes and also a few localised tolls and road pricing schemes in operation. There are proposals for a nationwide road tolling system.

Tax revenues in the UK are not normally hypothectated, and this is also the case with most motoring taxes. The exception is revenue raised from congestion charges and from parking charges, which is generally reserved to fund local transportation systems, which may include some aspects of the road system.

The two major taxes applied to motorists today in the UK are both excise duties: hydrocarbon oil duty or fuel duty as it is more commonly known, and vehicle excise duty.

In the early years of the Twentieth Century funding for roads and related infrastructure was drawn mainly from local ratepayers and the tram companies (who were obliged to maintain the road around their tracks under the Tramways Act of 1870). The price of fuel for steam engines had been subject to local coal duties until their abolition in 1889, and centrally controlled during World War I and World War II.

The 1903 motor-car act introduced the £1 registration fee for each motor vehicle, which were already also subject to carriage duty if they were not used solely for trade. Carriage duty was paid for a carriage licence which cost £2 2s. (£2.10) for vehicles weighing up to 1 ton, and £4 4s. (£4.20) for vehicles over 1 ton.[1]

A new duty was introduced in 1909 on "motor spirit" (imported petrol), leaving alternative fuels duty-free.[2] The original 1909 rate was 3d per imperial gallon.[3]

The Road Fund Licence (later renamed as Vehicle Excise Duty) was introduced in 1921 as way to collect money for a Road Fund, in order to maintain and improve roads which had suffered as a consequence of the Great War. It was intended as charge that could be levied regardless of the fuel used to power a vehicle. The Minister of Transport was responsible for collecting and spending the money collected[4] although in later years the Treasury assumed responsibility for the allocation of funds.

Increased transportation of freight by heavy road vehicles also increased the wear on roads and led first to a "wetted tax" for steam road locomotives, followed by the adoption of the recommendations of the Salter Report of 1933 for all heavy vehicles. This addressed a perception that the free use of roads was unfairly subsidising the railway's competitors, through the introduction of an additional axle weight duty within the VED in order to charge commercial motor vehicles for the costs they generated. There were exceptions for vehicles that seldom used public roads, such as agricultural tractors. This annual duty was payable by all road hauliers in proportion to the axle load and had the effect of removing many heavy steam-powered vehicles from the road. It was accompanied by changes in legislation that relieved local authorities of some of their costs through new abilities to set weight and speed limits.

The revenues from the new centralised funding mechanisms later allowed the government to consider a national network of roads under the Trunk Roads Act of 1936.

In March 1962, motoring organisations appealed to the Chancellor of the Exchequer to reduce the "disturbingly high cost of motoring" by cutting motoring taxation in the forthcoming budget. Motoring tax revenue had risen from £131 million in 1950 to £730 million in 1961-62.[5]

By February 1966 annual motoring taxation revenue had reached £1 billion, and the Royal Automobile Club were calling for an end to the "crippling spiral of motoring taxation", stating that less than one-third of the revenue was spent on road improvements.[6]

The measurement and coverage of duties have expanded over time to encompass most types of powered vehicle and different types of fuel. This arrangement of duties, under various names, formed the basis of the UK's road taxation policy for most of the century. The policy had general acceptance until the fuel protests of 2000 halted the practice of increasing duty at a rate above inflation. In spite of these protests, the country's economy and motorists' behaviour has generally become less sensitive to the price of fuel at the pump, with economists now estimating it to have a price elasticity of approximately -0.24,[7] (thus an economist would expect that a doubling of the fuel price would only stop a quarter of journeys.)

The significance of other types of charging as a policy instrument has become more important over time. Using fuel duty as the primary instrument of road policy was not challenged until the Smeed Report of 1962 suggested the use of congestion charging mechanisms, which were not introduced until decades later. Since 2002 policy cues have been given using the income tax system to encourage the purchase of company cars with low emissions.

Vehicle excise duty is also an excise duty. Nearly all motorised vehicles in the United Kingdom are required to have a vehicle licence, which is more commonly known as a tax disc, on display. In most cases, the payment of an annual vehicle excise duty (also known as road tax, car tax or road fund licence) is required to obtain the tax disc, although for some classes of vehicle there is no fee. The tax disc must be prominently displayed on the vehicle, however enforcement is now most often achieved via ANPR referencing a central computerised database, rather than through visual checking.[11]

In London, street markings and a sign (inset) with the white-on-red C alert drivers to the charge.

Since 2003 most vehicles entering parts of Central London have been required to pay a daily charge under the London congestion charge. Having won the first mayoral election in 2000, Ken Livingstone opted to exercise available powers to introduce congestion charging in London,[17][18] and charging commenced on 17 February 2003. An extension of the zone into West London came into effect on 19 February 2007.[19][20] Since 4 July 2005 the normal daily charge has been £8.[21] The total receipts from the London Congestion Charge for 2006-07 was £213 million (provisional figures), which, after operating costs, left £123m of hypothecated revenue for London transport schemes.[22] It has been postulated that, if the capital costs to set up the scheme were accounted for up front, a total of £10m revenue has been raised for Transport in London over five years of operation.[23]

In 2003 the Dartford Crossing construction debt was paid off, which should have resulted in the scrapping of the toll fee to cross. However, the government decided to continue to charge most crossing users to keep congestion levels down.[24] Ironically, since the upgrading of the crossing doubled capacity in terms of road lanes, but did not add extra toll booths, it is the toll booths themselves that are responsible for lengthy queues at peak times,[citation needed] and removal of the booths would almost certainly reduce congestion. As with congestion charging schemes, all proceeds must be used for transport purposes. In one year this money amounted to £60 million.[25]

Towards the end of 2006, the Mayor of London proposed the introduction of a variable congestion charge. Similarly to vehicle excise duty (VED), it would be based on emissions of carbon dioxide in grams/km. This would reduce or eliminate the charge for small and fuel-efficient vehicles, and increase it to up to £25 a day for large, inefficient vehicles such as SUVs, large saloons and compact MPVs with a Band G VED rating, that is, emissions of > 225 g/km of CO2. Electric zero-emissions vehicles are already exempt from the charge.[26][27] Transport for London introduced a low emission zone throughout nearly all of Greater London on 4 February 2008, covering nearly all of Greater London.[28] - the largest such zone in the world.[29] There will be a phased introduction of the scheme from 4 February 2008 through to January 2012. Different vehicles will be affected over time and increasingly tougher emissions standards will apply.[30] The zone is expected to reduce emissions, so that by 2012 they are 16% lower.[29] Payment of the LEZ charge is in addition to any congestion charge required.[31] 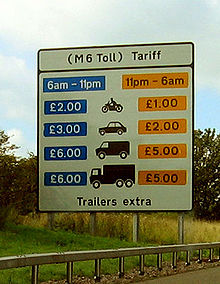 Prices for the M6 toll.
See also: History of toll roads in the United Kingdom

From the late 18th to the early 21st century tolls were generally only applied to major bridges and tunnels, for example the Severn crossing[32] & Forth Road Bridge,[33] although tolls were abolished on the latter in 2008.

There are only two public toll roads (Rye Road between Hoddesdon and Roydon, and College Road in Dulwich) together with another five or so private toll-roads.[34]

The UK's first privately operated motorway opened in 2003. The M6 Toll (originally the Birmingham Northern Relief Road) is designed to relieve the M6 through Birmingham, which is one of the most heavily used roads in the country.[35]

The one-time fee charged by the Driver and Vehicle Licensing Agency for the compulsory registration of a motor vehicle which is to be used or kept on public roads.

Customs duties on some Grey import vehicles and vehicle components or spares from outside the EU may be assessed at an additional charge which is then subject to VAT.

The value of a vehicle bought by a company for the dedicated use of its staff is treated as a taxable benefit for that individual, and assessed by HMRC with other income for income tax purposes. Until 2002 their financial benefit was assessed primarily based on price and mileage driven; this was then modified so that vehicles with lower emissions were assessed at a lower value than those with higher emissions. In addition, the taxable allowance for mileage using private cars has remained static.

A significant proportion of new vehicles are bought as company cars, thus this method of charging is not only aimed at encouraging companies to use "cleaner" vehicles, but, when sold on the second-hand market, these vehicles will filter through and raise the efficiency of the national 'fleet' .[36]

There is currently a proposal for a Manchester congestion charge.[39] Unlike the current version of the London charge, two cordons will be used, one covering the main area of Manchester and another covering the city centre.[40]

Proposals for an Edinburgh congestion charge of a £2 charge for crossing either outer cordon or inner cordon (or both) were rejected following a public referendum in 2005 by 74% of the votes cast.[41] On 2008-03-05, councils from the West Midlands, including those from Birmingham and Coventry, rejected the idea of imposing road pricing schemes on the area.[42]

In 2005, the Government published proposals for a UK wide road pricing scheme. This was designed to be revenue neutral with other motoring taxes to be reduced to compensate.[43] The plans have been extremely controversial with 1.8 million people signing a petition against them.[44]

Nottingham is proposing to become the first city in the UK to introduce a workplace parking levy. The scheme would result in a £185 per annum levy, rising to £350 by 2014, on each parking space made available to employees at businesses with more than ten such parking spaces. The council propose to use the revenue, which is forecast to be £12 million in the first year, to develop the city's tram system.[45]